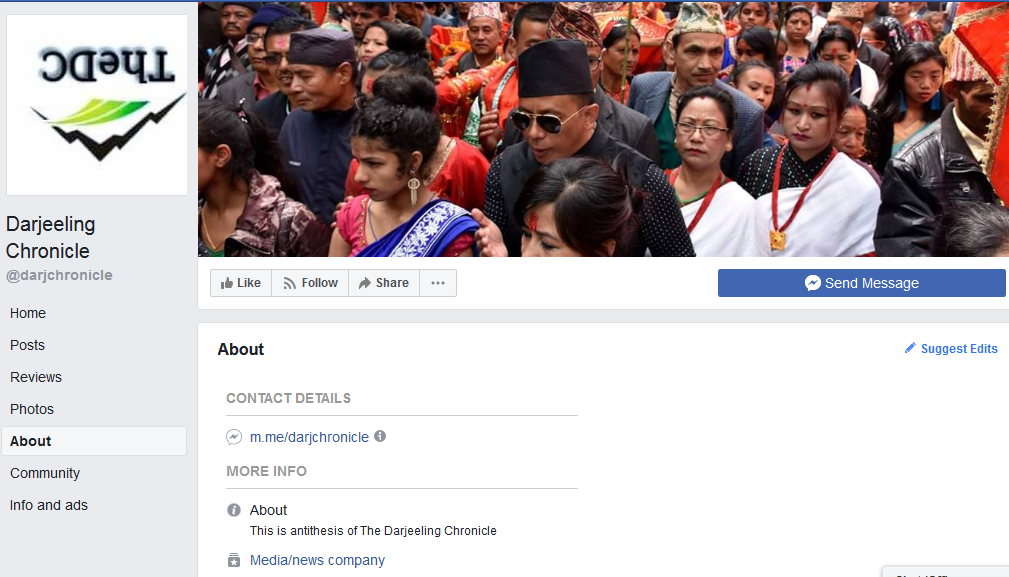 There is an old adage “imitation is the greatest form of flattery,” but is it always so?

In 2012, a Facebook page started to post news under the banner of Darjeeling Times (DT). This page had nothing to do with the official DT site or page, but it quickly garnered tens of thousands of followers, because most people assumed it to be the official DT page. In the initial days, the DT editor chose to overlook this infringement on their brand, as it seemed benign at that time.

As the 2013 Gorkhaland andolan began to heat up, this Fake DT page had turned into one of the most viewed and read pages from our region at that time. Cashing in on the goodwill and good name earned by Darjeeling Times, this page was taken very seriously by those who visited it.

Gradually, during the course of the agitation, this Fake DT page started to post provocative and communally insensitive posts.

On behalf of the DT, numerous appeals to the people dissociating themselves from this fake page, and also appealed to people to not pay any attention to the rumours and fabrications posted by this page. This fake DT page was reported to Facebook too, but no action was taken by them, since the fake DT page had way more followers than the original DT page.

In due course of time, the West Bengal government clamped down on media in the hills, and all local news channels were shut down. Almost all the news written in mainstream newspapers about Darjeeling hills were written from Bengal perspective and a lot of fabrications were posted. Darjeeling Times was the only media outlet that was reporting the truth fearlessly.

Eventually, cases were filed against Darjeeling Times under section 153(A) IPC among others. Section 153(A) criminalizes instances where someone is accused of, “Promoting enmity between different groups on grounds of religion, race, place of birth, residence, language, etc., and doing acts prejudicial to maintenance of harmony.” DT had never posted anything communally provocative; instead it had always championed harmony amidst a very vitiated atmosphere. Yet the filing of cases under non-bailable sections against the editor of DT came as a rude shock to all who were associated with it.

This case effectively shut down Darjeeling Times too during the 2013 Gorkhaland agitation.

On deeper enquiry, it turned out that the news police had attributed to Darjeeling Times as proofs of spreading hatred were actually the ones shared by the fake DT Facebook page. Later through discreet sources, it was revealed that the Fake DT handle was being managed by someone who is now dead, and was paid to post those communal posts so that original DT could be snared and prevented from writing the truth.

Of course, ultimately truth prevailed, and the case against DT Editor was quashed in the court of law, but it set precedence on how freedom of expression, and truth in journalism was curtailed.

It was during this period when DT had been shut down, that a few of us got together to form TheDC, so that our voices and the truth about our region could get reported.

A few days ago, one of our concerned readers shared with us a link to a FAKE page that purports to be “Darjeeling Chronicle” – https://www.facebook.com/pg/darjchronicle This is exactly how the Fake DT facebook page had also begun.

This, therefore is putting on record that

We THANK all our dearest readers, whose love, support, concern and above all TRUST is what has helped TheDC to stand out. We hope and pray for continued support from all of you.

Despite all the funds, paid Facebook pages, paid newspapers, paid TV channel and other propaganda tools at your disposal; your desperation has driven you to create this FAKE page to malign TheDC. You should ponder and reflect on this simple fact – why is it so?

The simple answer is because, SATYAMEVA JAYATE – the Truth Always Triumphs

TheDC platform has always reported the truth and will continue to do so, we have never bowed down to pressure and we never shall, and no matter how low you stoop to way-lay the public sentiment and promote anti-Gorkhaland agenda, the TRUTH will always find a way to shine through.

No matter how sinister it gets… we want those behind this Face page, and their masters to know… TheDC team shall endure, and so will the demand for Gorkhaland.