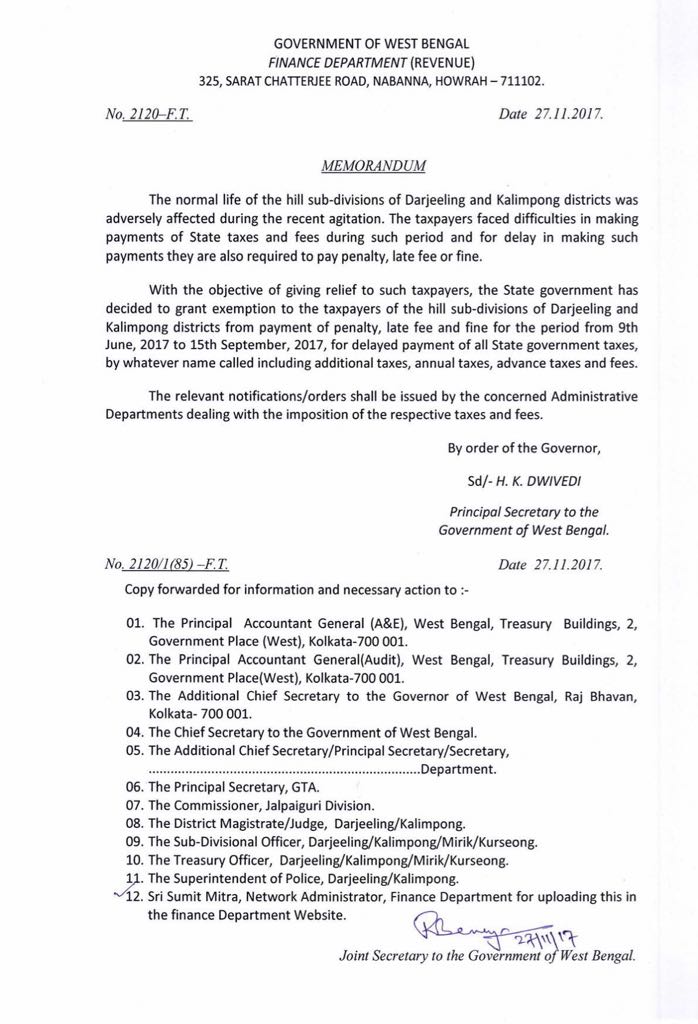 The West Bengal government has issued a notification stating that “Hill Tax Penalties and Fines will be forgiven for the periods,  9th June, 2017 to 15th September, 2017”.

“The normal life of the hill sub-divisions of Darjeeling and Kalimpong districts was adversely affected during the recent agitation. The taxpayers faced difficulties in making payments of State taxes and fees during such period and for delay in making such payments they are also required to pay penalty, late fee or fine.

With the objective of giving relief to such taxpayers, the State government has decided to grant exemption to the taxpayers of the hill sub-divisions of Darjeeling and Kalimpong districts from payment of penalty, late fee and fine for the period from 9th June, 2017 to 15th September, 2017, for delayed payment of all State government taxes, by whatever name called including additional taxes, annual taxes, advance taxes and fees.

The relevant notifications/orders shall be issued by the concerned Administrative Departments dealing with the imposition of the respective taxes and fees.

By order of the Governor,”

Sonada Children’s Lives Are Being Put to Risk

CURRENT STATE OF AFFAIRS – No one is to be blamed

Be the first to comment on "Hill Tax Penalties, Late Fees and Fines Exempted"