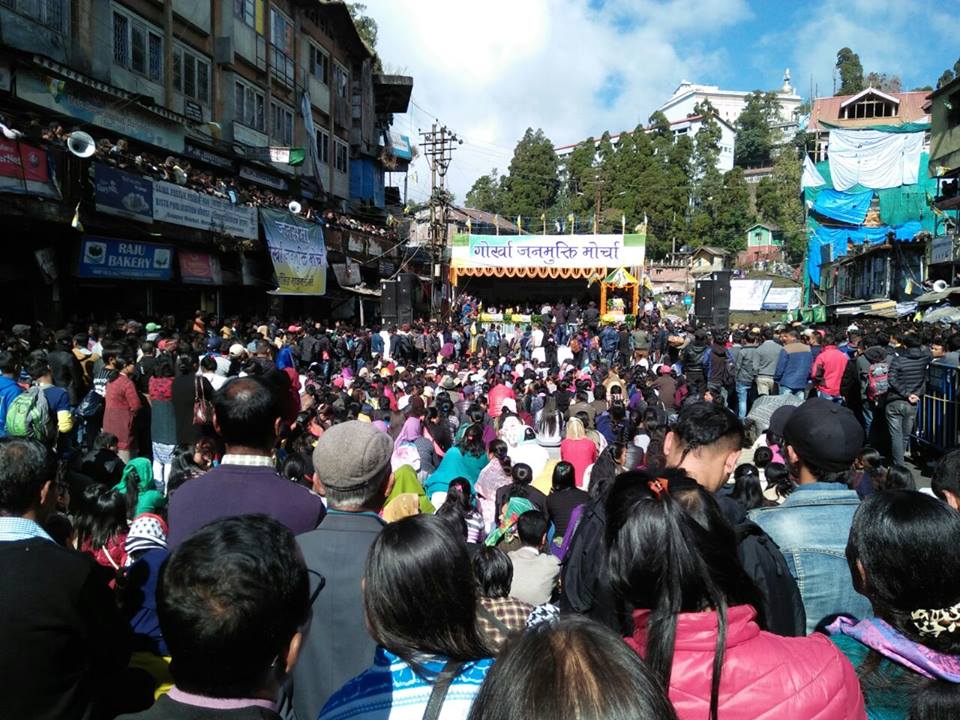 Around 3000 people attended yesterday’s first meeting organized by the Binay Tamang faction of Gorkha Janmukti Morcha. However, those from the Anit Thapa-Binay Tamang (AT-BT) faction put the number of attendees at around 4000. Supporters for the group had travelled from all parts of the hills, to attend the AT-BT rally. This is also the first such meet since the constitution of the administrative committee set up by the Mamata Banerjee government, which Tamang heads.

Buoyed by the presence of large number of supporters, Anit Thapa the second top leader in the rebel GJM camp said, “We must not indulge in politics of lies and false promise and speak the reality. It is the state government and not the public which has brought us here. But we will work hard to win people’s mandate.”

The Binay Tamang camp has called for a GJM central committee meeting has been called today (20th of November, 2017) at Sterling Resorts in Ghoom to discuss the future course of action. In all likelihood, fugitive Morcha president Bimal Gurung and general secretary Roshan Giri may be expelled today. Hinting at the removal of Bimal Gurung and Roshan Giri, Mr. Thapa saia, “from underground the earlier GJM leadership had announced my expulsion and of some other GJM office bearers from the party. Now it is time to see who gets expelled in future”.

The Tamang faction is backed by West Bengal chief minister Mamata Banerjee, as the Bengal government booked Gurung and Giri under the Unlawful Activities (Prevention) Act, and they went underground.

Sunday’s meeting at the motor stand in the heart of Darjeeling was considered as a litmus test for the rebel GJM faction to prove its supremacy in hill politics. In his appeal, Gurung had argued that public attendance would just jeopardize the long- standing demand for separate Gorkhaland state and the ongoing movement in support of that demand.

Signifying the public meeting, Mr. Binay Tamang told the press, “In light of the tremendous support shown today even in a Gurung stronghold, we want to now appeal to the Centre that we should be called for the tripartite meeting, not Bimal Gurung. We are the ones who truly represent the people now’’.

“We have had public meetings in Kurseong, for example. But this meeting was important because the Darjeeling sub-division was a Bimal Gurung stronghold and his own constituency of Tukvar falls in it. But even from Tukvar, as many as 100 vehicles full of supporters came to attend the meeting, is what the police have told me. People have also come from certain tea estates which were also Gurung strongholds and areas bordering Sikkim, where he was hiding for a while. As far as we are concerned, this shows the decline of Gurung’s support base. The situation in Darjeeling is entirely different from what it was four months ago with the unlawful activities that the Gurung camp was carrying out. The public has gone against them. Moreover, all their main leaders like Gurung himself and Roshan Giri are not in Darjeeling. We are the ones who are here. We are the guardians of the people of the Hills now,” he added.

Sunday’s public meeting also puts Tamang and Thapa in a strong position to return to the drawing board when they, along with leaders from all other Hill parties, meet the chief minister on Tuesday for the fourth round of bipartite talks. According to Tamang, the leaders will be raising pending matters which need to be settled by the state government, as well as raise new demands.

5 Comments on "“State Brought Us Here, But We Will Work to Win People’s Mandate” – Anit Thapa"