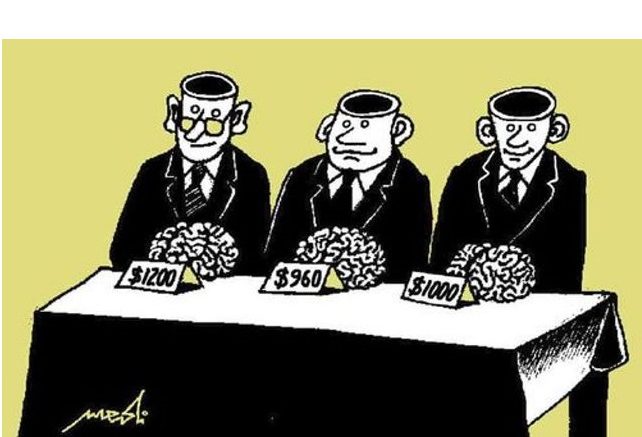 Cartoon: "Sales of the Brain" by Medi Belortaja


Two major developments have taken place in the last couple of days, which should come as a shot in the arm of those who want Gorkhaland. One is the news of the launch of a apolitically-politically- group Frustrated Youths Association of Darjeeling – FYAD, the other is the formation of a new committee in Delhi who will fight for Gorkhaland, from Delhi JUSTICE LEAGUE OF GORKHALAND: BRAINIEST GORKHAS OF THE UNIVERSE.

Sources say that think tanks of both the camps were seen huddling together till late last night (6th April) trying to find a way to destroy FYAD.  After a lengthy  deliberation,  when no solution seemed possible (primarily because nobody knows who the members are or where they are based) , some members  in both the camps felt that it was time to bury the khukuri,  between the existing rivals and combine forces to destroy the upstart FYAD. But better sense prevailed and they decided that FYAD or no FYAD the enmity remains, because of the sheer confusion it may cause.

With political  leaders joining/praising/denouncing/ leaving/ jabarjasti staying and claiming its my party-my party/  vis-à-vis  Bimal Gurung or Mamata Banerjee, not only the common man and  political pundits, even the  party members are getting confused. Apparently even people in the TMC camp are now saying things like,

Top neurologists at Darjeeling Sadar Hospital who have been studying this disorder closely say that the tumultuous events of past two-years have led to this nervous breakdown. They also say that both TMC-BT and GNLF-GJM-BJP camps were waiting to see Bimal Gurung at the airport (for vastly different reasons) on the 4th April but were instead visually, aurally, physiologically assaulted by Horlicks Aunty’s ‘we don’t want illeterated leaders in our hills‘ rant

The top neurologists at Darjeeling Sadar  Hospital also consulted their colleagues in Kurseong Sub-divisional hospital  and diagnosed this widespread epidemic as a severe case of PTSD –  PARTY (ma fyada hunjail ) TYAPPAI (hunay, nahunda) SIDE (lagnay) DISORDER, a most severe form of the everyday Post Traumatic Stress Disorder. It seems these doctors are well on their way to win a Nobel Prize in 2020.

If political parties in Darjeeling were perturbed, flabbergasted, confused, or in layman’s word- “tauko gajyang gunjung bhayo” a set of people in the Delhi who are always watching events in Darjeeling very closely have decided that this is  an opportune moment  to announce their own  committee of purebred  Khhatti intellectuals. So that this committee remains the overriding committee (BAAP OF ALL COMMITTEES) of intellectuals. They have decided to call it JUSTICE LEAGUE OF GORKHALAND: BRAINIEST GORKHAS OF THE UNIVERSE.

In order to ensure democratic in the organization, they have laid down some criteria for those who may wish to join:

After laying down the criteria the spokesperson for the it JUSTICE LEAGUE OF GORKHALAND: BRAINIEST GORKHAS OF THE UNIVERSE announced that membership has been closed. But rest assured it’s looking good.

*This news has been reported by a source who doesn’t want to be named because she is also vying for a membership into the FYAD.

Be the first to comment on "JUSTICE LEAGUE OF GORKHALAND: BRAINIEST GORKHAS OF THE UNIVERSE"