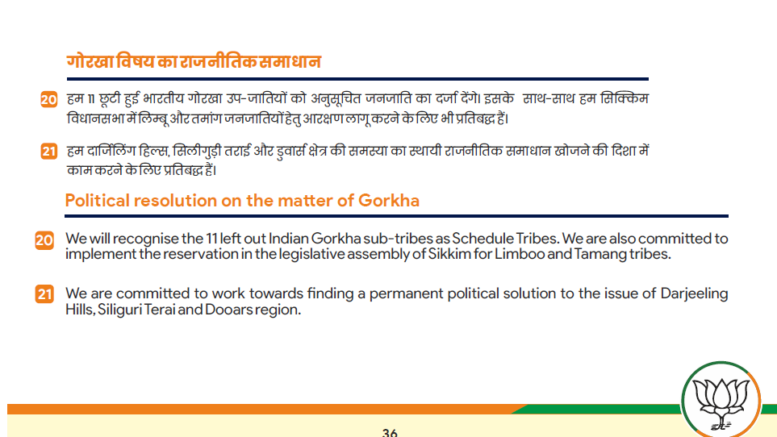 In a section dedicated to the Gorkhas, the BJP Manifesto has promised two important points

We will recognise the 11 left out Indian Gorkha sub-tribes as Schedule Tribes. We are also committed to implement the reservation in the legislative assembly of Sikkim for Limboo and Tamang tribes.

We are committed to work towards finding a permanent political solution to the issue of Darjeeling Hills, Siliguri Terai and Dooars region.

Reacting to the development a GJM Bimal Faction leader said, “This inclusion of Gorkha issues as a separate section is significant. This goes onto show that the BJP cares for the Gorkhas deeply and is very aware of our aspirations, and need to find a permanent political solution to it. You may have noticed the word Gorkha doesn’t even find a single mention in Trinamool. Their sincerity towards our community is made evident in their Manifesto itself.”

Reacting to the BJP Manifesto, Mr Keshav Pokharel of GJM(BT) faction however said, “there is no mention of the word Gorkhaland or the long pending demand of the Gorkhas.. there is an ambiguity in the term political solution for the GNLF it’s 6th Schedule and for us it’s Gorkhaland.”

“Regarding ST issue the manifesto only promises but doesn’t deliver. Even after PM announced it in North Bengal it’s still not done. Why only fake promises and no work,” he added.

DEVOID OF SELF-RESPECT: Gorkha Social Figures Bringing Shame to Themselves and to Us

Save Our Mall Road