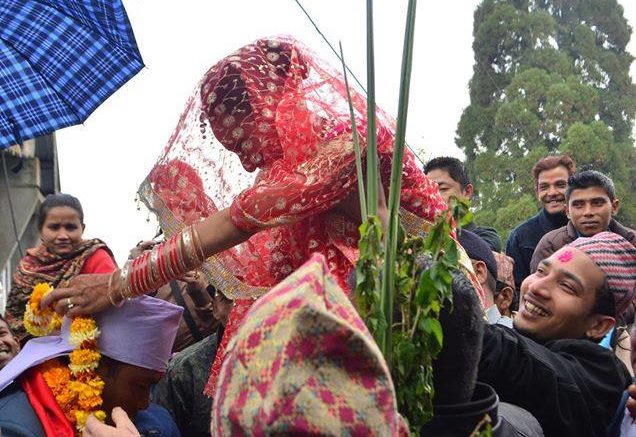 
The onset of winter in Darjeeling is a prelude to a beautiful season of emotions, merry, tension – it is the season of Marriages. This season will give rise to gossips and whispers, did you hear?

In case of a guy, its like… “Laxmi ko Chora ley Buhari Layoo Haree Hai!”

Yes, in Darjeeling the season of “Bhagunae” and “Bhagnae” is about to begin, in simple English, the art of eloping with the one you love.

Once you bring in a new bride at your home, hordes of neighbours, curious children and almost the entire village will be at the doorstep saying, “Naya Buhari Ta Sarai Ramri Rahecha”.

After three days of eloping, the “Chor ko Shor” comes, usually done by the same elderly people of the village marriages after marriages. They are the moderators between the boy’s family and the girls, but coming from the boy’s side, explaining in detail in what circumstances both of them eloped, what does the boy do and mostly what does the boy’s family do. In the “Chor ko Shor”, the main villains opposed to the marriage are the ones who say least related to the girl’s family. Whereas, the actual parents are silent, thinking “Bhai ta Halyo Abo Ke Garnu! Gari khancha Hola”.

The “chor ko shor bujhaune” custom is unique to our hills, and it requires a delicate handling of the matter. This is the most epic such handling, I ever heard.

Father of the Girl who eloped: Being still angry at his daughter, he blurts out, “tyo kesko ful hunthyo, tyo ta gu ho gu… no she is not a flower she is shit…. “

Where else can you find people so full of humor.

If both the side agree or even disagree, the next custom is that of “Dhok-Bhet”, where a co-coordinator conducts the whole event of introducing one another. If anyone from the family of the girl or the boy has a back problem or a sore knee, then they are on for one hell of a day.” Lu abo Samdhi-Samdhini, Lu Abo Mama-Maiju, Didi, Bhauju and so on goes the list till the back breaks. Only when the custom of “Sindur-Pote” is done, the eloping couple can call themselves married, before it, some strict member of the family whisper “Oi! Sindoor-Pote Na Bhaye Samma, Eta-Uta Nagarnu Hai”. In reality, everyone knows how cold it’s in Darjeeling and the” Eta-Uta” has already happened, right below their noses.

The greatest gift we Darjeelingeys possess and so do other Gorkhas spread all over is; helping each other in times of need, marriage in this case. Pallo Ghar ko Mama says “Mo Dui ta Khasi Sakauchu”, “Mo Dus tin refine tel” says the Maiju. Our system of helping each other goes on and on from “5 bora Chamal to 40-kilo alu”, and Marriage is the true test as well as an example of our unity, rarely found anywhere.

The system of dowry is absent among us, actually, the demand is from the girl’s side, that also in the form of “khasi ko tauko”, “ek dhiki dahi,” ‘teesta khola ko macha,” “sungur ko tauko”, “dui bottle rakshi”, “dui bottle dudh” and in the extreme case 101-/ rupee as a form of “Chori-Danda”.

SEE ALSO:  BACK TO THE FUTURE: Promotional email from a Hotel in Tigerhill, Darjeeling
Powered by Inline Related Posts

Now we have community halls, before marriages used to take place in the “Aangan” (Courtyard) and “Bari” (Kitchen Garden) of the family. The cooks are from the village itself, so are the decorators using the bamboo from the jungle to decorate the entire wedding. The youngsters from the village Samaj are the ones that help in the entire process; from “Nimtoo Barnu” till the last day of the marriage. In fact, children will be waiting for the “nimto” to arrive at their houses, so that they can enjoy “mittho supari and nariwal”.

Forget Buffet system, the “Khasi ko Khutta and Tauko ko Soup” cooked in” Phoshi” actually used to make local brew called “Rakshi” is the most sought after thing during “Bhat-Tyar” served in the afternoon. I still remember sitting on the floor holding a “Tapara” and elder brothers serving hot steaming rice with the soup and few pieces of meat. Sadly this system of “Bhat-Tyar” is slowing fading even in our remotest villages.

“Tika-Talo”, “Sarau Uthaunu” are the other two integral parts of our marriages, the Sarau is a small contribution of cash given by those who attend the marriage, which is written in “Khata“ this system helps the parents financially. In the tika-talo, presents are given to the newly wed, now a day’s Korean Blankets (Actually from China), Rice Cookers are given. Earlier, and to the horror of the newlyweds “Dekchi”, “Bottle ko Glass”, “Bottle ko Phuru” were given along with the rare “kas ko thal and gagri”. Our mothers keep all these gifts to be used as presents later in other’s marriage.

No marriage is complete without the mention of the “Janti-Party”, last year I saw such party loudly playing “Senteran Senteran” even before getting in the vehicle. One peculiar thing about the Janti is that, no matter how much alcohol you provide them in the marriage place, they will surely sneak and drink as much from outside.

Marriages are made in heaven, made out of love or made in the spur of the moment, nobody can actually tell… But one thing I am sure of is that in our community it brings the best of us “Unity” and holding each other in times of crisis. I don’t matter if we discontinue certain customs, traditions, but this custom of helping one another – inter-caste marriages, inter-religious marriages should last till the end of this world.

OPEN LETTER TO MAMATA: Darjeeling is No Switzerland, Doesn’t Aspire to be One