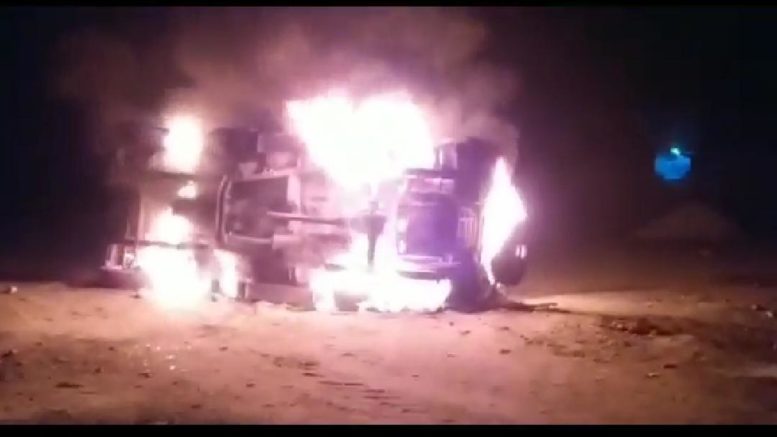 
On the 20th of April a Sunday around 10:30 PM, Salkumarhat in Block Number 1, Alipurduars turned into a battlefield.

According to sources, a critically ill patient had been referred to Ayush Hospital in Topsikhata. Soon after widespread speculations and rumours allegedly circulated in the social media about his death being due to Coronavirus across Alipurduars district.

Later the alleged dead body was brought to Salkumarhat for burial, which was apparently resisted by the locals. Soon the standoff leads to confrontation and closes to 3 police vehicles were allegedly burned down by the crowd, and close to 20 police officials are alleged to have been injured in the attack.

The residents of the area alleged that a police team arrived there with an earthmover after midnight to secretly dump the body of a person who died of the virus. As locals got wind of the alleged plans, the officials were met with resistance, they claimed.

During the clash, the policemen opened fire while leaving the spot, the locals alleged, injuring a youth. According to the locals, many people have been injured and they have been referred to North Bengal Medical College and Hospital.

Denying the allegations of the locals, Superintendent of Police Amitava Maity told reporters that a case has been lodged and they are trying to identify those behind the incident. He said it was being investigated who was behind the firing.

Director-General of Police Virendra, who was on a visit to Malda to supervise the preparedness to tackle coronavirus, said 20 policemen were injured in the mob attack and the condition of one of them was serious.

He said the attack on police is unfortunate and if the locals had any grievances they should have taken it up with the authorities.

Administrative officials have claimed that the patient died due to pre-existing conditions, and he had not ventured out anywhere or been in touch with anyone else.

The dead individual has been identified as a 60-year-old resident of Chinchula Tea Estate which comes under the Kalchini block.

Meanwhile, sources have said that the family members of the dead have been quarantined in their quarters in the tea garden.