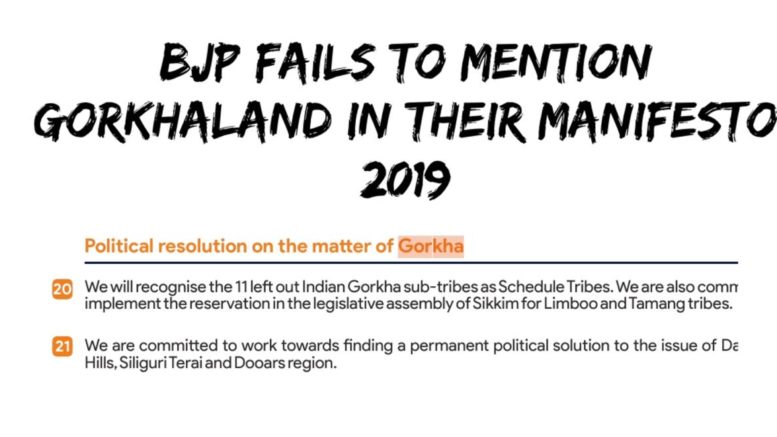 
The release of BJP election manifesto created a mini-political controversy in the Darjeeling hills, with supporters of TMC regime quickly pointing out “Gorkhaland“‘ word is missing from it. As we try to decode the sudden shift of loyalties of someone who used to swear by BJP and projected himself in the public eye as a stern “Gorkhaland crusader”, and scrutinize his sudden differences with the BJP manifesto of 2019. A certain level of examination thus remains due for the causalities of such instant developments that win over the “2 minutes Maggie challenge”.

A call for a strong MP candidate and its Bhoomiputra Aspect

The MP election dynamics in the Darjeeling region this year has no doubt been significantly influenced by the “Bhoomiputra” narrative. Though we have in the past been represented by a number of local candidates in the Parliament with no considerable result or performance at all, a sudden implant of the idea in the minds of the people that no other person can present our problems and situation at Delhi than one of our own kept us all thinking along those lines.

As such, with an anticipation of BJP fielding an experienced local candidate, the GJM-1 veteran with some experience in journalism was ready to pull his socks to fill in the slot. However, the nomination of another Gorkha candidate, with a far reaching potential, left his ambitions on doubtful grounds and thus an instant resignation was issued. His main point being that a “person from outside of Darjeeling could not understand the problems of the Gorkhas.

Lest we forget, the identity crisis facing Indian Gorkhas does not comprise of just a few lakh population in the Hills, Terai and Dooars, but it extends to a population of crores across the country and abroad being bound by the same aspirations, identity and heritage. Lest we forget that when the state machinery had fully suppressed the hills and its voice, when even the basic communication access through internet were blocked, it were the Gorkhas from across the nation and even outside who came out with their slogans of justice and unity, the ones who wept as us and kept the movement alive at the national level.

So now, is it fine for us who are more or less sold today at the hands of the state powers to question the integrity of the people who till today have keept their integrity towards Gorkhaland intact?

The farce of nomination and its subsequent withdrawal

While the concerned may have claimed that he had filed a nomination for MP candidature just for the sake of sake, as a mark of protest and to let BJP/GJM realise that there were far better options at disposal, I personally believe it was a petty stunt to clear his entrance into the hills. It was nothing but a staged act to get on the good books of the powers that be locally and at the state level.

Besides that, by contesting the elections, he himself should have known that he wouldn’t cross a double digit figure in vote count, something that even the state wouldn’t consider as a recognizable vote dividend. It may have also provided him with a reasonable ground for bargain with the major parties against the incumbent.

Misuse of the supposed intellect and a misinterpretation of the manifesto

The BJP national manifesto for this election contains a two point specific promise for the Gorkhas. First, it promises to include the 11 left out Gorkha communities into the ST category. And secondly, it promises to find a permanent political solution for the issues confronting Darjeeling hills, Siliguri, Terai and Dooars.

Attempts were made to impose a deliberate forceful ambiguity upon the people, by pushing forth the narrative that the word “Gorkhaland hasn’t been mentioned in the manifesto.” First of all, the BJP manifesto for this election clearly mentions their commitment to find a permanent political solution for the cause of Darjeeling hills, Siliguri, Terai and Dooars. Though BJP may not want to upset its ambitions of winning seats in double digits in West Bengal by mentioning the term Gorkhaland in its Manifesto, it is to be considered that the BJP hasn’t like in the past used terms like “sympathetically examine”.

The clause of being committed to work for a permanent political solution for the Gorkhas sheds a clear spectrum of limited choice of delivery without any diplomatic hint, the choice being in the ambit of our demand and aspirations.

Apart from that, a thorough read through the election manifesto of TMC reveals that there isn’t a word Gorkha, Gorkhaland or Gorkhaland Territorial Administration mentioned in it.

The outrage against the BJP manifesto for once and all seems to be a manufactured one, clearly put up to vent one’s frustration for not having one’s self desires fulfilled and doesn’t carry any weight or substantial foundation to stand for itself.

ONLY IN DARJEELING – Homeless in World Cup Town