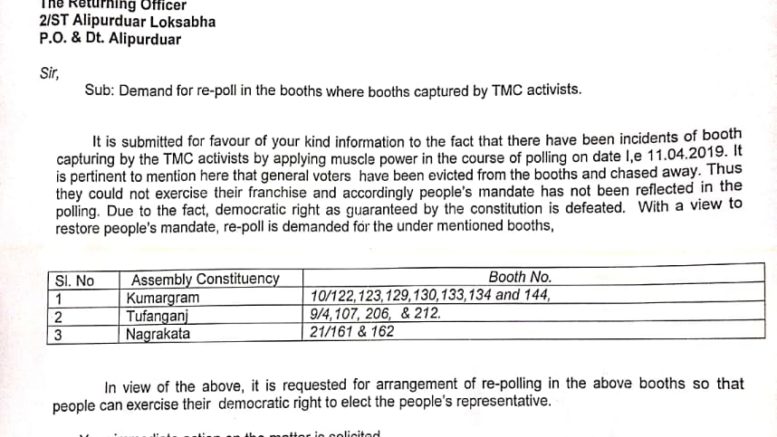 
Accusing the ruling Trinamool Congress of violence, rigging and intimidation in the Cooch Behar Lok Sabha seat during the first phase of polling in West Bengal on Thursday, BJP candidate Nishit Pramanik held a sit-in protest in front of the district magistrate’s office and demanded a re-poll in 500 booths where state police was deployed.

Pramanik alleged rigging in nearly 500 booths where state police was deployed. Pramanik’s security guards even had a scuffle with the local police when they went to lift the dharna.

BJP candidate from Alipurduar John Balra also complained of rigging by TMC workers in some of the booths. He also accused that his name had been covered with white paper in many booths.

“We want re-polling in nearly 500 booths due to massive rigging by the TMC cadres. If our demands are not met, then we will go for a massive protest,” Pramanik threatened.

Since morning, voters were seen in large numbers in booths to cast their votes. Till 5pm, Alipurduar recorded 81.05% voting while Cooch Behar registered 81.94%.

Speaking to media, Centre’s observer Dubey, however said, “The poll went off peacefully. The state police as well as the central forces did a good job. Overall polling was good…very good.”

Clashes broke out between BJP and TMC in Cooch Behar’s Dinhata. Similar incidents were reported from Mathabhanga and Natabari. At Rashamanta High School in Cooch Behar, polling was stopped for half an hour after supporters of TMC and BJP clashed with each other.

At Dinhata, an EVM machine was damaged and polling was stopped for a while. The local police rushed to the spot and brought the situation under control.

Speaking to News18, Rabindranath Ghosh, TMC leader and North Bengal development minister, said, “In some of the booths, EVM machines were not working properly. In some booths, I saw central forces were influencing the voters. I lodged a complaint with the Election Commission (EC).”

Within two hours of polling, the EC received 462 complaints of various nature, here.

Additional chief electoral officer Sanjay Basu too, accepted that they received 462 complaints but claimed that most of the issues were resolved.

West Bengal is witnessing Lok Sabha polls in seven phases. A total of 6, 97, 60,868 crore voters will cast their votes in 78,799 polling booths across the state.

The second phase of polling will be held on April 18 in Jalpaiguri, Darjeeling, and in Raiganj.

Be the first to comment on "Violence, Rigging, Intimidation – Typical Election Atmosphere in WB"