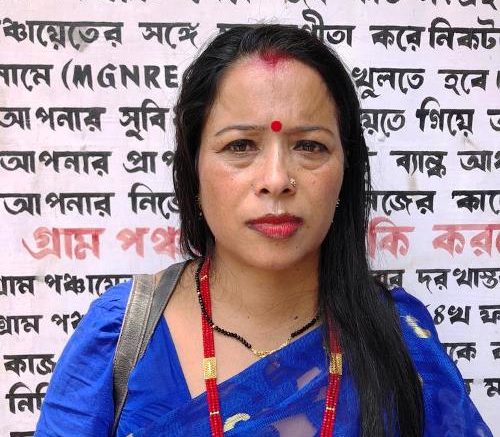 
At last TMC had to wash hand from Angrabhasa – 1 gram panchayat board of Nagrakata block, following the High Court order.

Following democratic elections, CPIM formed the board with Parboti Chhetri as Pradhan and Jaitri Oraon as Up-Pradhan.

In the presence of a huge police force and officers, the board formation process was held peacefully.

It may be recalled that state ruling party TMC forcibly formed the Angrabhasa – 1 GP board on 24th August in 2018 after GP election.

This GP is the smallest GP of Nagrakatta block, which elects only 7 panchayat members, out of 7 CPIM had won 4 seats and TMC had won 3, yet TMC formed the board forcibly, as they didn’t permit elected CPIM members to participate in the voting for board formation.

After that TMC ruled in the Panchayat for 7 months and today with court order CPIM formed the board.

She said in a peaceful environment the board formation process was completed. She added that “if police had played the same role in 2018, we could have formed the board that time also.”

Nagrakata BDO Smriti Subba said today as per high court order CPIM party formed the GP board. She said out of 7 members-only six members were present. The high court has ordered to dissolve the previous board, and today as per order new board formation was completed peacefully.

SEE ALSO:  Gorkha Concerns Fill Up Supreme Court Roster This Week and the Next
Powered by Inline Related Posts

Be the first to comment on "FASCISM DISMANTLED: Democracy Finally Prevails in Angrabhasa GP"