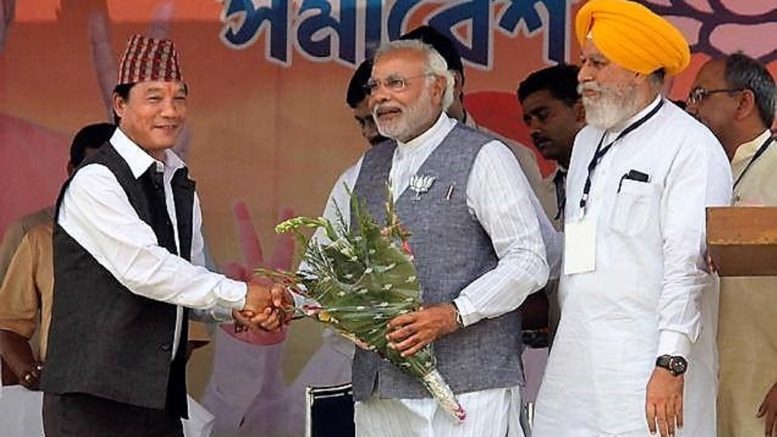 
With the ensuing Lok Sabha elections set to be conducted, and barely 9 days left in hands, the political mercury of Hills has had an abrupt rise after the BJP Election Manifesto for the 2019 Lok Sabha Elections was released yesterday. The reason for the rise in mercury level and also pressure in hill politics was caused due to the inclusion of Darjeeling and Gorkha issues and concerns featured in the manifesto as:

Political resolution on the matter of Gorkhas

1.”We will recognise the 11 left out Indian Gorkha sub-tribes as Schedule Tribes. We are also committed to implement the reservation in the legislative assembly of Sikkim for Limboo and Tamang tribes.

2.”We are committed to work towards finding a permanent political solution to the issue of Darjeeling Hills, Siliguri Terai and Dooars region.”

No sooner had the Official BJP Election Manifesto got circulated in the media, it spread like a wildfire in social media circles here in Darjeeling as well.

The reactions came even faster, those with TMC started to decry the fact BJP Manifesto didn’t mention the word GORKHALAND in it.

Yes! That happened, TMC which is anti-Gorkhaland outraged against BJP not specifically mentioning the “G”word.

Here’s a fun game, if you want to know, which portals and newspapers are sympathetic to TMC (or being paid by them), it’s very easy, just check and see if they have uploaded something on these lines or not.

It may be recalled that in the Hills, there is a tug of war between GJM Bimal faction and GJM Binay group. Perhaps it would rather be appropriate to call this a fight between TMC vs BJP. GJM (BT) representing TMC, as they have merged with TMC fielding former Darjeeling MLA Amar Singh Rai as TMC Lok Sabha candidate from Darjeeling Constituency, and GJM (BG) has fielded Raju Bista as BJP candidate in collaboration with GNLF and also CPRM.

The war is not just a tug-of-war but a fierce electoral battle going on, with both BJP and TMC desperately trying to win this strategically very important seat. While BJP wants to retain the seat after having their candidate represents Darjeeling for two consecutive terms, and TMC is desperate to complete their dominance of the hills by winning this ever-important election.

Until recently both the candidates of respective parties have left no stone unturned to assure the people here that they will fulfil their promises, and resolve the issues that Hills, Terai and Dooars people have time and again raised for many years.

Passing allegations and exchange of verbatim in defense is a natural phenomenon in politics.

Few days back in an all party meet in Mirik, BJP candidate Raju Bista was seen aggressive like never before in his campaigns. He asked his opponent Amar Rai as to “why he [Amar Rai] had failed to to address the Land Rights issue of Hills in the West Bengal Legislative Assembly while he was an MLA? How could he ask the same to PM Modi after being MP and why was he fooling the naive public when the Land Rights is in the jurisdiction of state not the centre?”

As his defense Amar Rai, though in mild tone, countered Raju Bista’s allegations by playing with his words. He defended himself to cover up his past lack of success and action by blaming Bimal Gurung and was seen repeating the same manifesto of 2016 Assembly Election. He spared time and space to laud the unauthentic and functionless (people are not happy to accept the Board) GTA President Binay Tamang praising his development works done so far.

Thing to note is TMC is in power in West Bengal for the last seven years and Mamata Banerjee has time and again shown her thumbs down when the issue of Land Rights and Gorkhaland is raised. She has also divided the Hills ethnic groups into 15 fragmented parts having their respective Development Boards.

Another important aspect of this electoral battle is people’s energetic participation.

Thanks to social media that from the layman to political observers, analysts, columnist and “keyboard warriors” are engaged and can be seen defending and siding with their respective parties and leaders in Facebook and Twitter. Some in Whatsapp groups exchange information and breaking news of the development on their side of the campaign. Who-said-what and who-is-losing in social media polls etc.

Also fumes of hot debate can be seen in the comment boxes of news portals and in some posts of personal views and opinion.

No matter who others may spin it, but the fact is people haven’t forgotten the blood soaked Gorkhaland movement of 2017 and up-rising that claimed 13-precious-lives two years back. The wound is still fresh. Hence, it wouldn’t be wrong to assert that this Lok Sabha Election is connected with people’s sentiments. The adversity and atrocities that people faced are reflected in their narratives and articulation they share on social media.

The movement that started with a flicker of fire of Linguistic Imperialism on the part of Imperialist Bengal government, was crushed violently and later transformed into a People’s movement.

The 105 days long shut down of Hills, internet ban and media clamp down and food supply blockade are still resurfacing in people’s mind till date.

Thus, people have this unhealed ache in hearts, even today when the blood drenched bodies of martyrs flash in their eyes, they say a silent prayer and wish for the end to TMC raj. The suffering, tear gas, and sound of gun shots are still traumatic to many.

However, despite having gone through the deadly ordeals of life some people have genuinely forgotten the bloodbath of yester years and chosen to side with ruler, who has in an obvious political gimmick assured to resolve the identity crisis faced by the Gorkhas. I guess those who are swearing by her today, are not seeing the obvious joke in her statement. The same lady who labelled Gorkhas as terrorists. is that some sections of the people are advocating and vouching for the same lady who unleashed a reign of terror in our hills.

People have already chosen their candidate

The hilarious jokes that went viral few days back in social media really brought smile in people’s sad face and some might have burst into a hearty laughter.

A fellow asked his friend which side he had decided to vote. His friend whispered into his ears, “From head to toe I am TMC, but only my thumb is BJP.”

The atmosphere of fear has clouded Hills and people are fear mongered in such a way that every one is reluctant to speak out in the open.

One more set of funny and viral joke doing the rounds is a silly mistake committed by a local news portal which is a testament to how messed up political scenario in the hills is. In their headlines they wrote, “Left Out Primary Volunteer Teachers Organization Extends Support To BJP Candidate-Amar Singh Rai.”

Even Amar Singh Rai must have laughed his lungs out or got raged with anger. Was that the sixth sense of a reporter in whose mind BJP’s name cropped up first? This shows that people have leaned towards BJP and its candidate might emerge victorious from Darjeeling.

War between morality and immorality

The evils of Gorkhaland movement that traumatized people for two years, and the good that they want to see in tomorrow’s dawn with their self-respect intact and walking with their head held high without fear of intimidation is in one’s hand.

Every one has the right to vote the leader of their choice. It is a privilege given by the supreme law of our nation, and its time we use this right of ours to to defeat the power of bullet by the power of ballot.