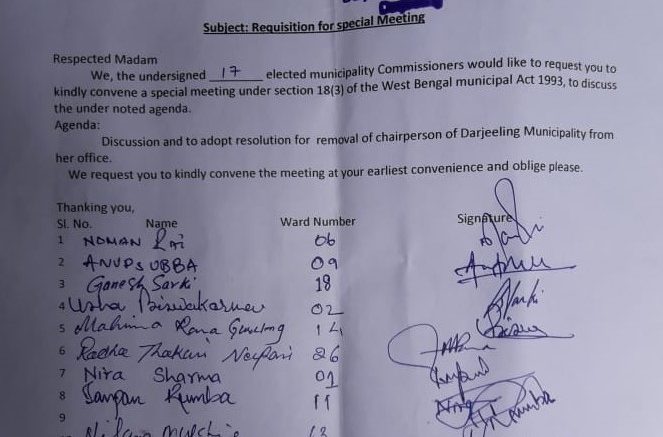 
17 Darjeeling Municipality Councillors have signed a motion stating no confidence against the current chairperson.

According to sources, 17 municipal councillors, led by Noman Rai – who had been expelled from GJM (BT) team today submitted the motion.

“We, the undersigned 17 elected municipality commissioners would like to request you to kindly convene a special meeting under section 18(3) of the West Bengal municipal Act 1993, to discuss the under noted agenda.

Discussion and to adopt resolution for removal of chairperson of Darjeeling Municipality from her office.

We request you to kindly convene the meeting at your earliest convenience and oblige please.” [sic]

Darjeeling Municipality has 32 wards, and one of the councillors Mr. Ram Golay had resigned earlier. So out of 31 wards, those seeking to overturn the current Board seem to have majority.

It might be reminded that the Binay Tamang camp of the Gorkha Janmukti Morcha had named Prativa Rai and Sagar Tamang for the posts of chairperson and vice-chairperson of Darjeeling municipality, in January of 2018, and had stamped their authority over the region.

After the massive show of confidence by the public for BJP, the United Gorkha alliance leader Ajay Edwards had called for municipality councillors to either resign or leave the BT group.

Immediately following the submission of the letter, Gorkha Janmukti Morcha spokesperson BP Bajgain has been detained by the police

SEE ALSO:  CLEANING #DARJEELING: Tiger Hill Is So Filthy - No Thanks to The People Who Visit
Powered by Inline Related Posts