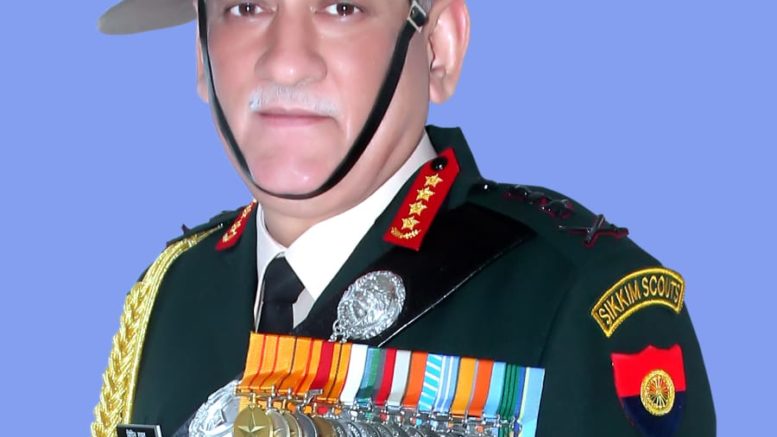 ‘YATRAHAM VIJAY-STATRA – We the Metaphor for Victory' : Befitting that the 1st Chief of the Defence Staff Gen Bipin Rawat is a 11/Gorkha Rifles Officer


Gen. Bipin Rawat has been named the first Chief of the Defence Staff (CDS), which is a befitting tribute to all the Gorkha soldiers who have served our nation with pride and honour.

Though born in Uttarakhand, Gen. Bipin Rawat is a Gorkha by Creed. He was commissioned in the Fifth Battalion of the Eleven Gorkha Rifles 5/11 GR in December 1978, from IMA, Dehradun, where he was awarded the ‘Sword of Honour’.

The CDS will act as the principal military adviser to the defence minister on all matters relating to the army, navy and air force. The appointee will be responsible for facilitating the restructuring of military commands for optimal utilisation of resources by bringing about jointness in operations, in the areas of operation, logistics, transport, training, support services, communications, repairs and maintenance of the three services within three years.

The tri-service agencies, organisations and commands relating to cyber and space will be also be under the CDS’ command and he will also function as the military adviser to the Nuclear Command Authority.

WHO IS BIPIN RAWAT, INDIA’S FIRST CHIEF OF DEFENCE STAFF

In a career spanning 41 years, General Bipin Rawat has had an illustrious military profile with vast operational and staff exposure.

Wherever the battle field, the Regiment has carved an enviable niche for itself and acquitted itself honorably in keeping with its motto of “YATRAHAM VIJAY-STATRA – We the Metaphor for Victory“, Regimental Battle Cry “JAI MAHA KALI AYYO GORKHALI” and salutation “JAI GORAKH”

Be the first to comment on "India’s First Chief of the Defence Staff Officer Gen. Bipin Rawat is a Gorkha by Creed"