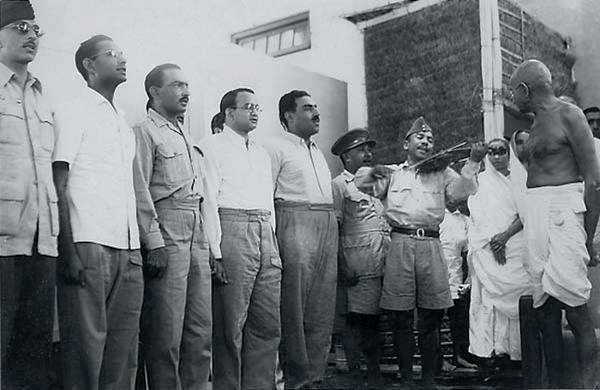 A veteran had once observed, “We wish Netaji were alive after India gained independence, had he been, history would have treated Gorkhalis much more kindly, for he knew the truth about how Gorkhalis fought alongside him for INA.”
The loss of Netaji was felt by everyone, but most of all it was felt by those who served directly under him. The INA veterans never got their dues, and those who were left behind had to face enormous humiliation. Perhaps the person who directly served under Netaji and yet was most humiliated was none other than Gorkhali great Capt. Ram Singh Thakuri, the soldier who gave music to INA songs like “Kadam Kadam Badaye Ja.”
Capt. Thakuri was asked by Netaji to re-compose Gurudev Rabindranath Tagore’s version of Jana Gana Mana in a martial tune to which INA soldiers could march to.
On Netaji’s request INA Capt. Abid Ali with the help of Mumtaz Hussain rewrote Gurudev’s Gana Gana Mana (which he had written in Sanskritised Bengali) in Hindusthani as “शुभ सुख चैन – Subha Skhuh Chain ki Barsha Barse” which was adopted as the national anthem (Qaumi Tarana) by the Provisional Free Government of India (Arzi Hukumat-e-Azad Hind) led by Netaji. The original tune for Jana Gana Mana was composed by Gurudev Tagore, however, it was Capt. Thakuri who gave it the form we sing it in today.
शुभ सुख चैन was first played as the national anthem of free India first time on 11 September 1942 at Hamburg, and Capt. Thakuri was especially invited to play Jana Gana Mana when Pt. Jawahar Lal Nehru unfurled the Tiranga from Lal Quila. In 1950, it was decided that Jana Gana Mana will remain India’s national anthem, the version of the tune was the one that had been composed by Capt. Ram Singh Thakuri
However, when the then DGHC brought out an AD crediting Capt. Thakuri with giving tune to Jana Gana Mana, many “bhadraloks” were rattled, and they went on to abuse Capt. Thakuri, one of Netaji’s own nephew even went on to the extent of even saying, “[the tune] could not have been composed by a Gorkha.” Another Rabindra Sangeet exponent Subinoy Roy had even said, “The anthem was set to tune by none other than Gurudev Rabindranath Tagore; just imagine a Gorkha soldier doing that; after all it requires some knowledge of that class and its basics,” which had then prompted CPRM to file a defamation case against Subinoy Roy, one wonders what ever might have been the outcome of that case? [details here ]
Capt. Thakuri continued to serve his vocation in music and he always cherishes his Netaji Gold Medal which he had been awarded personally by Netaji in 1943, over George VI medal he had won in 1937, or later the President Police Medal he won in 1972.
Netaji had cherished Capt. Thakuri and his music and it is evident from the fact that Netaji had gifted Capt. Thakuri a violin and a saxophone as gifts.
Had Netaji been alive, the controversy over who gave tune to India’s national anthem would never have arisen, and perhaps Gorkhalis would not have to clamour for the right to self-determination so much. He knew the truth and chances are he would have supported the soldiers who fought alongside him. Netaji’s loss is not only a loss for West Bengal but a loss to all Indians who are patriotic, sincere and honest.
………………………….
This article has been reposted to remind our nation, how the Gorkha Freedom Fighters were denied their rightful place in the history.
Today is also the Birth Day of Capt. Thakuri – we very fondly remember him and thank him for his contribution towards our freedom movement.