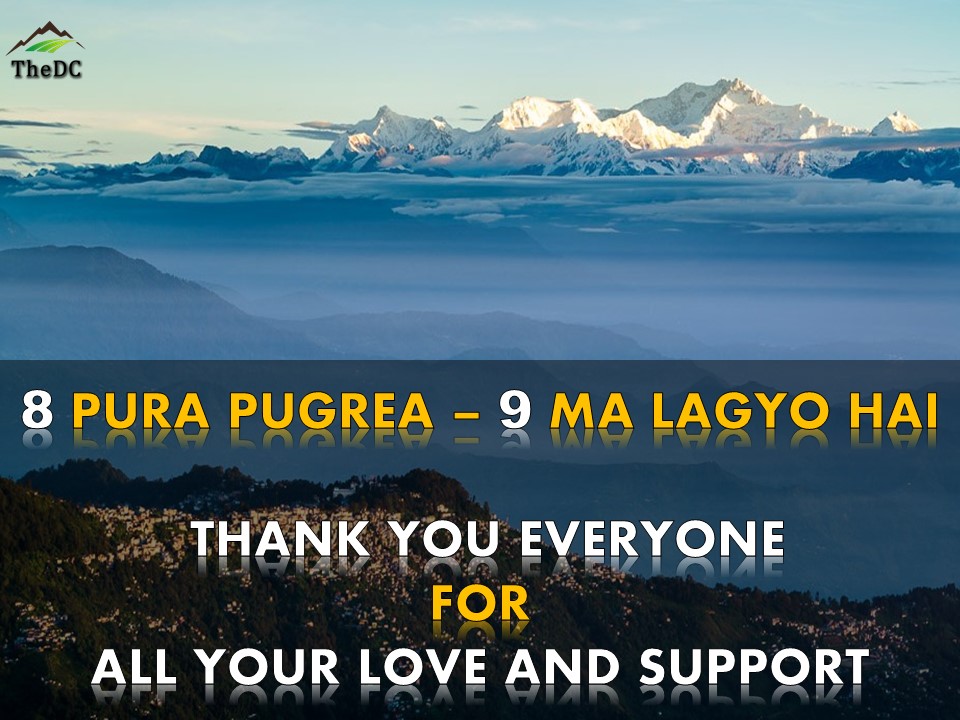 
As we celebrate TheDC 9th anniversary, and as I congratulate all the readers, contributors and members of the page, I am also bound to reflect on an important question – “What does TheDC mean to us?”

The question may look strange but it does provide a meaningful space for introspection.

From the point of inception back in 2013, TheDC was formed out of desperation and frustration among some individuals about the lack of authenticity and transparency of news coverage information concerning Gorkhaland. What was being projected in the national media was absolute misinformation and carried the narrative of the oppressors than the oppressed.

TheDC was established to provide people’s account of the reality – unvarnished ground-level truth.

Of course, over the course of its years of operation, social media has undergone a lot of change. From the point, where only a few educated lot ventured into social media and relied on it for information, to this day where almost every other person has accounts across all possible platforms, the structure of media and its relevance has drastically changed. We have travelled from the days of reliance on articles and written reports to massive scale video journalism.

Despite all these changes, one thing still has remained constant – TheDC and its mode of news and information dissemination. It still gives everyone all the relevant news, information from the region, interesting facts and articles, political commentary and opinion, pieces of art and music by our regional artists, stories and poems, and most important of all, it gives us something that today most media houses, journalists and leaders have given up on – the realisation that the idea of Gorkhaland still endures. And it is perhaps a sad reflection of how unscrupulous some people have been, that despite the profusion of social media pages, TheDC is where it began 7-years ago – the only news site still providing unvarnished ground-level truth concerning Gorkhaland. The majority today report what they are paid to by the ruling party or politicians in power.

TheDC was formed to be a platform that belonged to the region and the community, and so has it been – for the people, of the people and by the people.

TheDC over the years has chronicled news and information sourced through its thousands of readers spread across and beyond the region, the opinions of the people and their thoughts, their talents and their requests. While sometimes you would see someone singing a fabulous song, you would some other times see someone’s request for blood. Sometimes someone asking help trace their lost bags and some other times someone trying to return a wallet they had found. The achievements of our daughters and sons were shared, while we also together grieved the loss of our own people. The years have gone by within these moments that remained embedded between some intriguing editorials, some nostalgic articles with colloquial language and of course with all the news that has mattered to us.

To say the least, TheDC has gone to become a dining table member to many people. Many have loved us and many have equally differed from us. And TheDC has grown with all its readers amongst agreements, denial, arguments and compliments. While there have been times of “Khusi le Gazakkai huney”, there have also been episodes of “Thuska Thuski” – all in good time, all with good people. So I would like to congratulate each and every reader of TheDC, the contributors, the core team that has relentlessly put its effort in putting together the bits and pieces, and every single person whose life TheDC has touched even remotely.

8-years is a very long time if one would see and such a long period of time cannot just tell you a happy story. Being a volunteer-run independent media site in this age and this place itself becomes a story of struggle and TheDC has seen more struggle than it has ever seen any happiness. People have had the liberty to name TheDC affiliates of falana, chilana and dhiskana and those falana, chilana and dhiskana too have on their part made their displeasure against TheDC evident because of its habit of telling the truth. TheDC on its part has moved ahead fearlessly and unbothered on the knife-edge between them. The true haunting however began post-2017 Andolan as the portal on its side decided to have a spine and kept on reporting the truth while the others had clearly decided to keep a mum.

It is important to note that TheDC is a completely non-commercial website with 0 income generation of any kind. The team members work on a completely voluntary basis with no incentive or expectation. They are driven only by their passion and love for the people and for Gorkhaland.

Imagine not being able to attend your father’s last rites because the police have been hounding you at the behest of the powers that be and choose to arrive at the house looking for you, right after the news of your father’s death went out. Sounds hypothetical maybe, but the story is based on the real lived experience of one of our team members.

Irrespective of all the negatives, TheDC has continued to endure and with all of your love and support, it will continue to thrive. Thanks to kind people like you all who have put in your faith and trust in us. Lawyers like Anand Bhandari sir, who have defended us pro bono – with no fees being paid. Administrative officials, who have continued to address the issues we have raised, and our dear readers who have stood by us like a rock.

So, for many TheDC might just be a page and a website posting news. But if you look deeper enough, it is a voice – yours, mine and everyone else’s. It represents independence, freedom and truth even when there have been uncountable attempts to shut it down and destroy it. It represents hope to endure, with nothing in hand but a pen, passion, an idea and the truth.

As Andy Dufrane has said – “Hope is a beautiful thing, perhaps the most beautiful of all… And no good thing ever dies.”