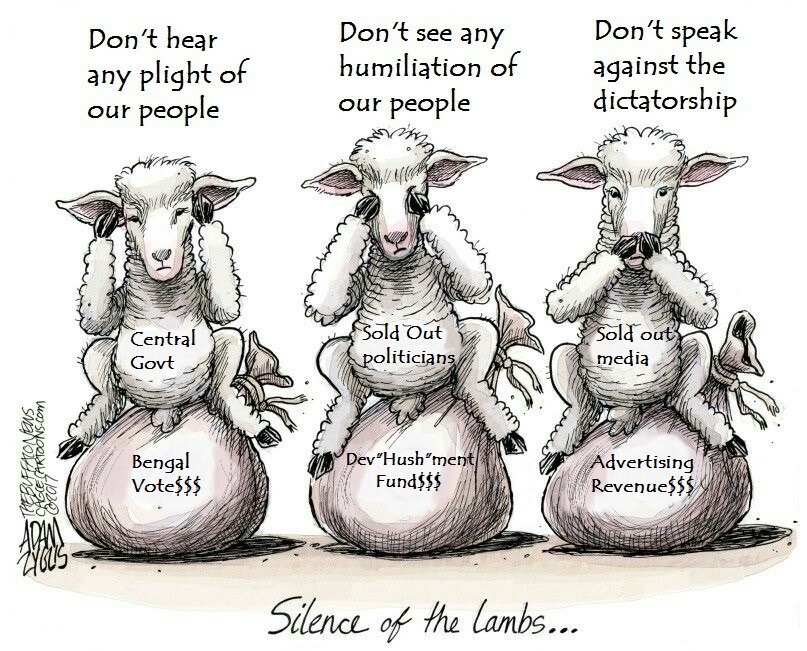 
Politicising education in the hills has resulted in generations of hill students and their future ruined. Illegal appointment of teachers, not based on merit but party affiliations has caused widespread harm to the present and future of our people. But no one seems to care – writes Kiran Pradhan

One of the reputed local Nepali daily newspapers of the hills highlighted gross mismanagement of the teachers’ appointment at the St. Philomena’s Girls High School one of the reputed schools in the Kalimpong district. According to the paper, one person claimed that the interview was conducted covertly by the institution. He accused the school authority that, the school management grossly failed to publish the teachers’ recruitment advertisement in the daily journal so that most of the educated people of the district remained unaware regarding the interview.

Likewise, the same paper on its editorial part, point out the mismanagement of the teachers’ recruitment in another Kalimpong school, the S.U.M.I. It mentioned that the reputed institution too was accused by the locals and party leaders of recruiting teachers in contravention of the NCTC rules and regulations. But such accusations to the school management committee and misusing the seat of power by them, are nothing new in the hills.

Spotlighting such unfair practices in teachers’ recruitment does not seem to create much outrage among the hill public these days, as the whole education system in the hills is widely politicised by the politicians and their party workers. So, the practice of nepotism and favouritism is very overt in the hill education system, and it has become a culture of sorts and is perhaps appreciated and expected by the educated hill mass.

The ever increasing unemployment crisis for the educated youths in the hills has forced them to kneel in front of the ruling party leaders, carrying their party flag, while the leaders canvass for the polls. Of course, it must hurt their sense of pride, to be educated and qualified, and yet forced to bend in front of uneducated politicians. But what can be done, they have no choice. Sometimes their condition would compel them to seek favours from the party leaders and later do their bidding.

The quality of education in the hills was far superior in the past. Government schools had achieved a good name in the academic quality but in recent years, an ever-increasing interference from the political class in the hill academic institutions has severely damaged the schools, as well as their reputation. The open practice of nepotism and petty politics in the government schools has exceptionally downgraded some of the school’s good names. If the influence of the political culture continues to dominate the school system, then it will severely decline the quality of education in the hills.

Another looming threat to the quality of the hill education is the recruiting of voluntary teachers. It poses a grave danger to the entire education system in the hills. The random appointing of the voluntary teachers by the school authority without verifying their educational background and their teaching competence has been very unfair to the students. If the students of the secondary sections are taught by the less competent teachers and inexperienced volunteer teachers, then we can only guess, what would be the quality of the education obtained by the students.

But we have become shocking numb to such practices and this ‘volunteer teacher‘ concept is acceptable to the hill public, for we don’t see anyone protesting against such practices on a wider scale. The appointment of the voluntary teachers too is done according to the party allegiance, then practising of actual merit and the candidate’s proficiency in the teaching field.

This is not a welcome sign in the hill education system. But the party in power look after their party interest than the quality of education.

This is, however, helpful to the West Bengal government, their financial burden will be decreased in the hill government schools, as most of the teachers’ shortage will be adjusted with the volunteer teachers, and they won’t have to pay full salary to underqualified or unqualified teachers.

The quality of education in some of the government schools has been deteriorating, rather than improving in the hills, and the general cause of it is the interference of the political parties and uneducated politicians. The political influence has already entered in the teachers’ recruiting process in both the Kalimpong and Darjeeling districts, and if the hill public and the parents do not ponder over it on time, then the future human resources of the hill can turn out to be bleak and it very harmful for the regional development, as well as our community.

The final question that needs answering is do our politicians have really any concern for the future of the hills? I don’t think so, and why would they do so? after all their own children go to the best academic institutions and study in far off places. So why do they bother for the common people future?