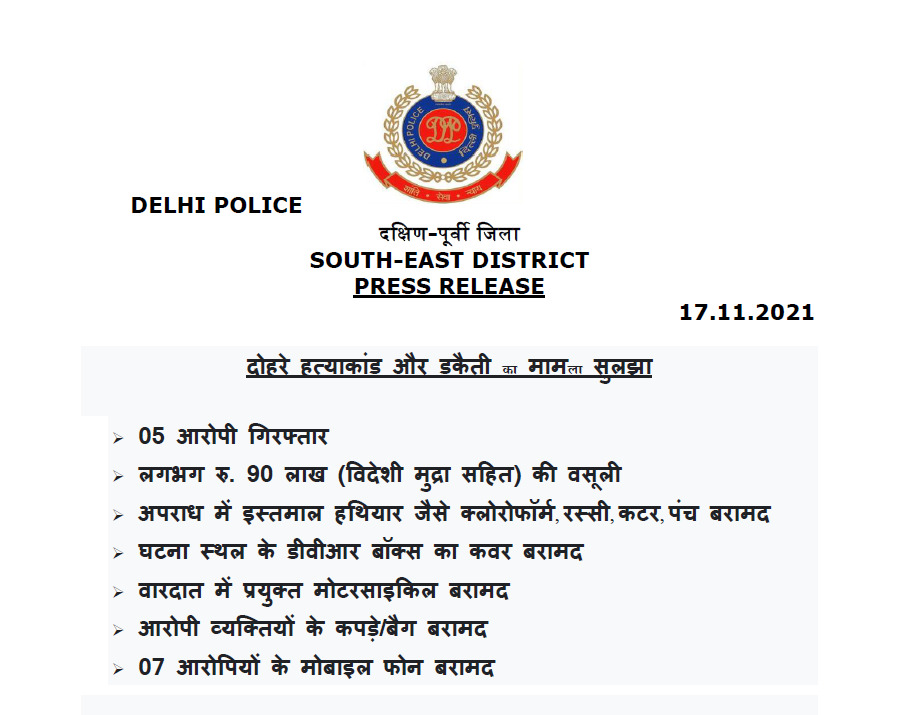 
The Delhi Police have solved the case concerning the murder of two women from Darjeeling – Sujala Gurung Pradhan and Meena Rai, in South Delhi’s Jangpura Extension. They have arrested five men for allegedly smothering the women to death and stealing Rs 90 lakh from the house.

Police said the five accused had come with ropes, cutters and chloroform late on Sunday to commit burglary. When the women found them and tried to raise an alarm, they killed the two.

On Monday, Sujaila Gurung (40) and Meena Rai (35) had been found lying dead in the house.

During the investigation, police recovered CCTV footage, showing five masked men walking outside the house on the night of the incident. The men are seen standing outside with bags and masks.

Esha Pandey, DCP (Southeast) said, “We checked other CCTVs and found they left the area on a bike. However, the number wasn’t visible. Our team then mapped CCTVs before the incident and analysed the footage. The bike number was traced and the owner was identified as Sachit Saxena”

Police sent teams to catch Saxena. On Wednesday, he was caught with his associates Prashant Basista (22), Dhananjay, Ramesh and Aniket.

“They had robbed the house and were planning to flee to different states. They were frequently changing hideouts. Our team managed to arrest them within two days,” said the police.

During interrogation, it was revealed that Saxena is the nephew of one a domestic worker who previously worked at the Jangpura house. He knew the owners kept cash inside the house and planned the burglary with his friends.

“They were ready to attack the owners had they caught them. To evade arrest, the accused were using VOIP or internet calls to communicate,” said the officer.

Police said that the men went outside the house on Sunday night at 10 pm. They waited for 3-4 hours. Around 2 am, four of them jumped the wall and entered the house from the back door. They entered Meena’s room but she woke up. They used chloroform to overpower her and did the same with Sujaila.

Details of the Murderers:

While Basista works at a private insurance company, Jha, Ramesh and Dhananjay are school dropouts. They all have all been booked for murder and dacoity.

Annual Get Together of Delhi Police Pariwar by Darjeeling Boys 2018

Be the first to comment on "Delhi Police Solve the Murder of Two Darjeeling Women Case – 5 Arrested, Around Rs 90 Lakhs Recovered"