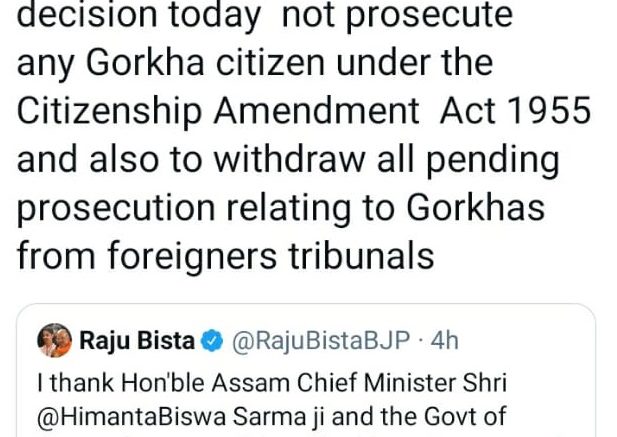 
In a huge relief to the Gorkhas of parts of Assam, the Government of Assam yesterday issued a notification to include Gorkha communities as one of the ‘protected classes‘ in Sadiya Tribal Belt for those who are permanent residents.

Despite having lived in the Sadiya Tribal belts for several generations, the Ahom, Moran, Mattock, Chutia and Gorkha communities did not have land rights. Identifying them as ‘protected classes’ will now allow them to rightfully own the ancestral lands where generations of the families have lived.

Yesterday, Darjeeling MP Raju Bista had tweeted to thank the Chief Minister, Himanta Biswa Sharma, and the Government of Assam for recognizing Gorkhas as a protected class.

In his response to the tweet by the MP, the Chief Minister stated “You will be further happy to note that Assam cabinet took a decision today not to prosecute any Gorkha citizen under the Citizenship Amendment Act 1955 and also to withdraw all pending prosecutions relating to Gorkhas from foreigners tribunals.”

It may be recalled that the Gorkhas who did not get the NRC were required to approach the Foreigners’ Tribunals to contest their case.

The decision by the Government of Assam to exempt the Gorkhas from going to the Tribunals is much welcome news for the Gorkhas of Assam who have been long seeking recognition as one of the original inhabitants of Assam. The last yester, the Darjeeling MP has called upon former CM Sarbanda Sonowal regarding the issue and was given positive assurances by the Chief Minister.

Be the first to comment on "Gorkhas in Assam not to be prosecuted under CAA, says Chief Minister Himanta Biswa Sharma"