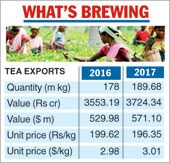 Tea exports have bounced back in the first 10 months of 2017 despite a no-show from the Darjeeling hills where plantation activity had come to a standstill because of 104 days of political strike.

According to provisional figures released by the Tea Board on Thursday, exports stood at 189.68 million kg between January and October compared with 178 million kg in the same period last year, a growth of 6.5 per cent.

On a per unit basis, prices were down to Rs 196.35 per kg from Rs 199.62 per kg because of a stronger rupee against the dollar and a slide in the sterling against international currencies. In dollar terms, Indian tea fetched $3.01 per kg compared with $2.98 per kg in the year-ago period.

While exports to large volume markets such as the US, the UAE, Iran and Pakistan have increased during the period, shipments to other volume drivers such as Russia and the UK fell.

Industry observers termed the rise in exports as a positive sign, led by high volume growth.

“After a decline in 2016, exports have shown healthy growth. Prices, in terms of dollar, are also better even as it is slightly lower in rupee terms because of the currency fluctuation. However, the net realisation for the industry is higher because of the volume pick-up. As an industry, we should focus on the subcontinent and the Asian markets where consumption is growing. India needs to export at least 50 million kg tea more out of the domestic market,” Azam Monem, chairman of the Indian Tea Association, said.

A bumper crop in Africa, especially in Kenya, and higher production in north India, depressed the scope of exports for domestic players last year. The situation has reversed this year as production slipped both in Africa and in north India.

Be the first to comment on "Darjeeling Tea Sees Rise in Demand, Export and Price"