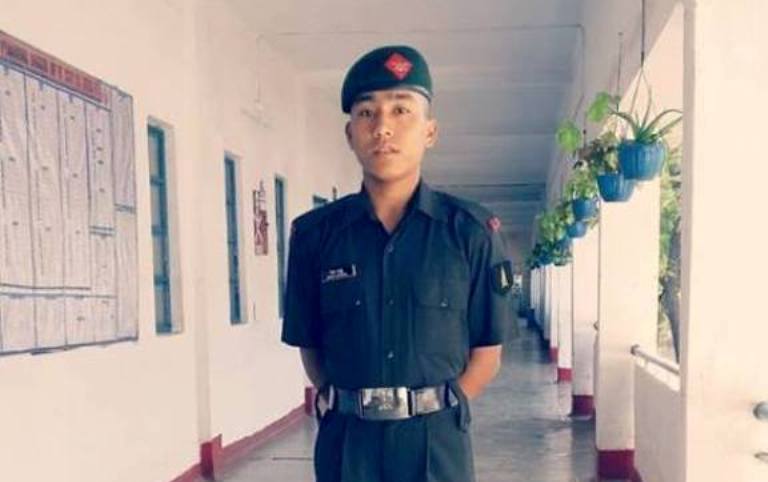 We are sad to report the Martyrdom of Rfn Jiwan Gurung of Lamhatta in Nausera sector, Kashmir.

Rifleman Jiwan Gurung along with his officer Major Shashi Dharan V Nair (33) both of 2/1 Gorkha Rifles were martyred when an Improvised Explosive Device (IED) exploded in Naushera sector along the Line of Control (LoC) on Friday. The youngest son of Shri. Kiran Gurung of Lamahatta Gram Panchayat, under Rangli Rangliot Block in Darjeeling Rfn Jiwan Gurung was only 24-years-old. He was an active social worker, and well liked by everyone who came across him. Extending their solidarity, one of the members of local samaj, Pravat Sahayogi Samaj said, “We are deeply grieved today, that one of our very hard working member Shri. Kiran Gurung’s son and an inspiration to all Rfn. Jiwan Gurung of 2/1 Gorkha Rifles was martyred in Kashmir. He was an excellent solider and a son. Not everyone gets the honour of becoming a martyr for their nation, it is only a rare few who get this honour, Jiwan was among those very lucky few.” The mortal remains of the officer Shahi  Nair and Jiwan Gurung was brought to Rajouri cantonment before being flown to their respective home towns of Pune and Darjeeling for the last rites in a service aircraft, the spokesperson said.

On behalf of all our readers and team members, we extend our heartfelt GRATITUDE to the the family members of Martyrs Rfn Jiwan Gurung and Major SDV Nair. May God grant them with strength to over come this irreparable loss. [We thank Dipanker Pradhan for sharing pics from GRD days]

Sex and the Indian men