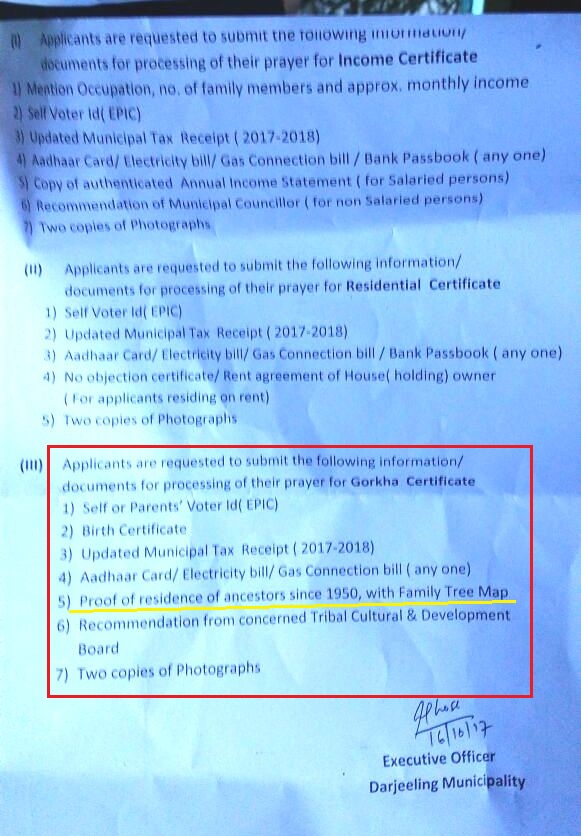 Darjeeling Municipality notice asking for " proof of residence of ancestors since 1950, with family tree map," from those seeking "Gorkha certificate"


As the push for a nation-wide National Register of Citizens (NRC) exercise gets stronger, there are growing concerns among the Indian Gorkha community settled in various pockets across the country. The discussions are gaining more ground after Assam published its final NRC list on August 31, 2019, the process which was monitored by the Supreme Court of India. As reported by different media organisations, of the estimated 25 lakh Gorkhas living in Assam, about 1 lakh were excluded from the final list.

The reasons for the exclusion could be anything; from clerical mistakes, not able to furnish documents as per the cut-off year of 1971, or inability to establish relationship and family continuity. Meanwhile, the issue has provided enough fodder for the political leaders who see it as an opportunity to display their badge of political allegiance.

Organisations and leaders aligned to the ruling parties are promising that Gorkhas need not worry, while those in opposition are claiming that Gorkhas are the target in the whole exercise. Whatever their political compulsions are, it is time that the community comes together to discuss and find a way forward for the future of the Indian Gorkhas as a whole. The bigger concern is not about supporting or opposing NRC, but ensuring that the authorities in power understand the deep-rooted history of the Gorkhas in India.

The NRC exercise, in essence, is for the benefit of our nation; to identify illegal infiltrators so that the country is secured. To dismiss the NRC exercise undertaken under the watch of the Supreme Court as a political agenda is naive, and to blindly support it because of any political compulsion is dangerous, especially for the Gorkha community.

The Gorkhas need to be wary of the exercise because we have always been seen as the ‘outsiders’ in the larger Indian context. For most people, it is easier to assume that the Gorkhas have come to India from Nepal, because we speak the same language, rather than try to understand the deep-rooted and complex history of the community. Although identified by their language and ethnicity, the Gorkhas living in different parts of India have their own unique history and its sense of identity with respect to the place they reside.

The Gorkhas of Darjeeling Hills, Terai, and Dooars

The history of Darjeeling hills, Terai and Dooars are complex, with multiple treaties between British India, Nepal, Sikkim, Bhutan, and Tibet defining its pre-Independence status. This region was governed under various administrative regimens such as – Non-Regulated Areas, Scheduled District, Backward Tract and Partially Excluded Area. The Gorkhas of North Bengal are indigenous to the region and became part of the Indian Union along with the land, people, customs, and traditions.

The Gorkhas of North India

The Gorkhas of North India, namely Himachal Pradesh, Uttarakhand, and parts of Uttar Pradesh are as indigenous to the land as any other community there. As history speaks, the erstwhile Gorkha Kingdom extended up to Kangra in Himachal Pradesh. It was only after the Treaty of Sigauli 1816 that the borders were drawn between British India and the Nepalese Kingdom. There was no repatriation and the Gorkhas living in the territories were automatically absorbed in the land, the same way people of Indian ethnicity were absorbed in the Terai regions of Nepal.

The Gorkhas of North East

In documented history, the Gorkhas entered the North East as the British began to expand and penetrate into the resource-rich Northeast frontiers. The discovery of oil in Digboi, the coal mines of Meghalaya, the Anglo-Burmese Wars brought waves of Gorkha soldiers, agriculture workers, and labourers into the area. During the Anglo-Burmese war (1824-1826) the Gorkha soldiers formed an integral part of the British forces fighting to push back the Burmese troops advancing from the Northeast. The history of Gorkha settlement in the Northeast is well beyond 200 years and have contributed immensely in the socio-economic sphere of the region.

Soldiers who settled in India

Across the country, there are pockets of Gorkha people, especially the soldiers who chose to settle in India after retiring from their services. There are sizeable chunks of Gorkha people settled in UP, Jharkhand, Kashmir, Punjab, and even in southern Indian states. For the children of ex-servicemen, India provides good schooling, healthcare and better opportunities for the future.

Nepalese citizens who come in search of work

By virtue of the free borders and movement agreement between India and Nepal, many Nepalese citizens who come to India for work have also settled down in various cities across India. While many still hold their Nepali citizenships, there are others who have adopted India and have lived here for over two generations. Under the Citizenship Amendment Bill 2016, they are today Indians like any other citizen.

The NRC process poses a huge challenge to the entire community as there is very little understanding of the socio-political history of the Gorkhas in the power corridors of Delhi. There is a story about a national leader who had visited Darjeeling some years ago and after seeing so many people with the trademark Dhaka Topi, speaking in Nepali, he supposedly remarked to his aide “Itney saarey Nepali kahaan se aa gaye yahaan” (where did so many Nepalese come from). Such is the tragedy of the Gorkhas and we must accept it as our collective failure that even after 72 years of independence, our fellow citizens and the country’s leaders do not know who we are.

It shows that we have not been able to tell our story to the people in power and the nation at large. The NRC process could be a chance to make sure that the Gorkhas are given their due as one of the original inhabitants of the nation. Given the history and contribution of the Gorkhas in the process of nation-building, it is pertinent to demand that the Gorkhas are not denied their right to belong and identity as proud citizens of India.

Together, we must approach the government to ensure that the Gorkha community, irrespective of where they live, are protected under the NRC process.