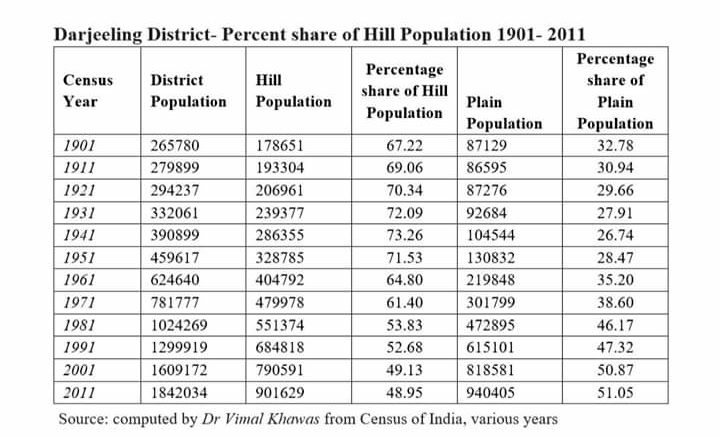 The figures given in the table below has been computed by Dr.Vimal Khawas, HOD, Peace and Conflict Studies, Sikkim University

On the outset let me inform you that the statement you made in Mirik regarding the consequences of NRC is false. Though the statement you made is appalling, we understand that it is only false propaganda. We have seen enough of the politics that the intellectual bhadralok plays with our emotions. But the times have changed, we have evolved over the years politically, socially and intellectually except the few who are still standing on your side, so such false propaganda will not have any impact on us.

We are well aware that the election in Bengal is nearing and your party is concerned with its present position. If the recently concluded Parliamentary elections are any indicator to the patterns of voting in Bengal your party is in a very slippery ground which is making you lose your sanity and thereby make such irresponsible and condemnable statement. It is your good luck that Bimal Gurung is absent from the political scenario of the hills. Had he been there today have you dared to make such a statement?

All the opportunists and betrayers, who you think will lend you support and strength and have probably clapped to make you happy when you uttered such a lie are only a symbol of your desperation. As you very well know that these people are incapable of winning even in their municipality ward against the candidate supported by Bimal Gurung.

As for the NRC, we do not fear it and have no reason to fear it. We are legitimate citizens of India.

Only the illegitimate citizens who have crossed the border illegitimately in the cover of the dark, and are plenty in the rank and file of your party have reasons to fear the NRC.

For once tell me honestly are you opposing the NRC, because the Gorkhas will be deported to Nepal and you feel for them? Or are you opposing NRC because you fear that half of your party cadres and supporters will be found to have crossed the Indian border illegally which will ensure the annihilation of your party in one strike? But I have to concede that you are very clever Mr Gautam Deb. To save your skin from the impact of NRC, you are using us as the bait and unfortunately, the dumb politicians of hills believe your narrative that Gorkhas are in grave danger and also make rounds of Assam. Or maybe I am too naive to understand their motives, motives which have already betrayed the aspiration of the people for the sake of a few dollars.

Mr Gautam Deb, this table given below is to educate you and to illustrate my earlier point that we do not have any reasons to fear NRC. The table shows that the hill population which was predominantly made up by the Gorkha people had always been greater than that of the plains. But by the 1971 census, you see that the plains population starts to grow and for your kind information this is the time that North Bengal and Darjeeling District witnessed the influx of illegal Bangladeshi immigrants, who are most central and significant for the growth of your party. If NRC is implemented in Bengal they are the one who will be most vulnerable to eviction by the Indian state and therefore your effort to stop the implementation of NRC. You do not have goodwill for us, if you had any then your party and the state ruled by you would not have committed so much of atrocities against the innocent Gorkha population in 2017.

Mr Gautam Deb, you may argue against me saying many among us have come from Nepal. Yes, there may be but you should remember that they are as legal as any Indian citizens. They are entitled to enjoy all the benefits of the Indian citizens except the voting rights as granted by the Indo Nepal Friendship Treaty of 1950. Further, let me tell you that our politics is based on the value of Indianess. We are demanding the separate state of Gorkhaland based on the cultural and linguistic differences with you and your people and to legitimately establish this difference, we during the agitation in the 1980s demanded the abrogation the 1950 Treaty. If we were illegal do you think that we would be demanding such a thing?

Finally, for a moment Mr Gautam Deb lets imagine what you are saying is true. We are not scared of being deported. Therefore, you should relax and facilitate the smooth implementation of the NRC. But we know that your intentions are different. You only want to save your colonial cousins who have crossed the borders without papers. You want actors from Bangladesh to come and campaign for your party. You do not want our welfare and betterment. If you are so concerned for us kindly withdraw all the false cases that have been charged against the very people for whom you are shedding crocodile tears. If you are concerned for us then kindly negotiate and work towards fulfilling our century-old demand. If Gorkhaland is created you will never have to trouble yourself of coming to the cold climates of the hills to tell us what danger is lurking on us. We are capable of handling all the dangers that confront us. We know our politics and your politics. We are not going to fall prey to your evil designs The General Secretary of GJM in a recently circulated video says “we have not crossed the border illegally but the border have crossed us.”

Therefore whatever effort you make to create obstacles for the implementation of NRC we are going to make sure that it is implemented in Bengal and all the illegal migrants, the strength of your party is evicted from our land.