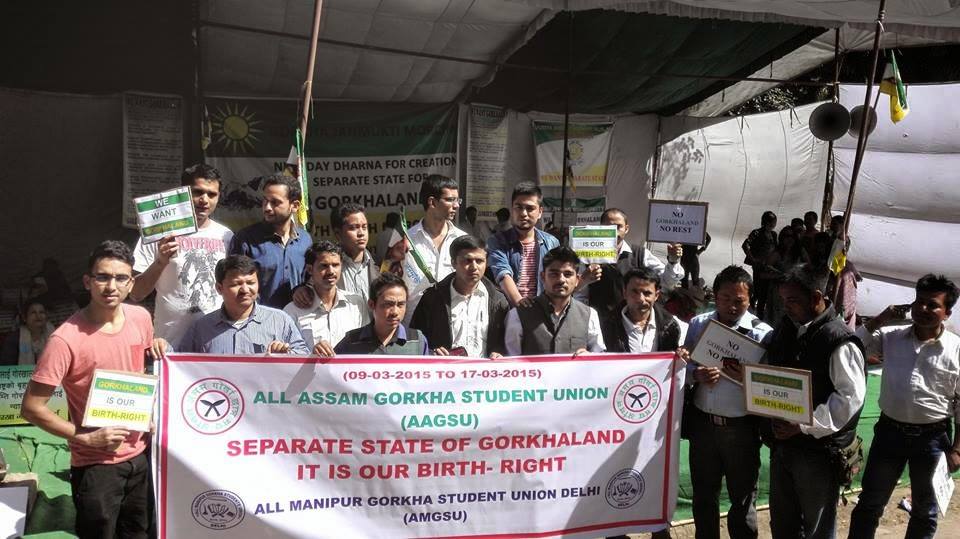 “All animals are equal, but some animals are more equal than others.” – George Orwell, Animal Farm (1945)

This statement by George Orwell perhaps best reflects the status of Manipur Gorkha community in the current scenario. Having been abandoned by the state government and any hope of support from other indigenous communities, the ongoing ILP imbroglio and its impact on the community could perhaps be the last straw that breaks the camel’s back. Despite having a history of 200 years in Manipur, the approximately 60,000 strong Gorkha community is today facing de-recognition and possible eviction from the state.

On recorded history, the Gorkhas first arrived in Manipur during the time of Maharaja Gambhir Singh in 1824. As Manipur was much troubled by Burmese intruders and troops, the Maharaja raised an army in 1825 and recruited Gorkhas from Sylhet and named the militia as ‘Victoria Paltan’. Later when the British arrived, Gorkha settler was given grazing ground in the northern part of the state and the community was issued land ownership documents (pattas).

The community is settled for nearly 2 centuries and has lived in an area of 140 sq. miles till 1915. Besides the army settlers, there were the gwala (cowherd) or grazers community. There used to be times when an entire stretch of road named in Jiribam was named as Man Bahadur Limbu’s Road. Today, after almost 2 centuries, our population is not even 1 lakh. We are still considered ‘outsiders’ or ‘foreigners’ and we have been relentlessly victimized and targeted by one political group or the other.

This is not the first instance of such uprising in Manipur. Between 1979-83, close to 40,000 native Gorkhalis were forced to leave Manipur and sadly the then government of Manipur and India did not take adequate measures to protect them from this forced expulsion. In fact, between 1977 and 1983 up to 100,000 Gorkhalis were forced to leave from various parts of North East which created widespread anguish and fear amongst Gorkhalis living across IndiaThe current demand of a separate state of Gorkhaland has its roots in such displacement and sense of abandonment by the government of India.

Reports of Gorkhas being subjected to various forms of humiliation and threat is something we have heard on a regular basis in the current ILP imbroglio in Manipur. The proposed ILP bill sets the cut-off date for identifying the population as per the census of 1951. Majority of the Gorkha people at that time lived in remote places people collecting census would not have even bothered to venture back in 1951.

What is even more disheartening is the stoic silence of our community leaders from across the country and their unwillingness to take notice of the helplessness. Today, we feel we are being treated as second-class citizens even amongst the Gorkha community. The long silence of our leadership to take note of the situation and speak up for the downtrodden Gorkhas has made us run around like a headless chicken, not knowing which door to knock and whom to plead for our case.

Let me also remind you all that we are no fewer Gorkhas than any of you. Our history says that we have the 1st Gorkhali freedom fighter, Subedar Niranjan Chhetri who defended Manipur under the revolutionary Manipuri hero Jubraj Tekendrajit Singh and was hanged by the British in 1891. His last words were, “my birthplace is my Motherland, I am ready to die for this land, and I am ready to kill for this land… but I am not ready to accept surrender and subjugation of my own land.” Till this date, his martyrdom is celebrated across the country by the Gorkha community.

We have also rallied across the streets of Manipur during the Nepali Bhasha Andolan proudly donning and singing the same chorus like our brethren in Assam, Sikkim, Darjeeling, Meghalaya, Dehradun, Himachal, and everywhere else in the country. We did not bother to care when the bystanders jeered at us saying how can ‘foreigners’ demand for a language recognition. Bhasha Divas is today one of the biggest celebration and social gathering for Gorkhas in Manipur.

We still travel all the way from Manipur to Darjeeling or Delhi whenever there is a national solidarity for Gorkhaland or any other cause relating to the language or other social cause. Now and again, a few organizations come to Manipur during their membership drive and they leave after collecting the fees. We have donated for every Gorkha cause, be it for installing Saheed Durga Malla’s statue in the parliament, or to finance for any Gorkha social and political struggles, or for the landslide victims in Darjeeling. Yet, where did we go wrong, that no one is willing to speak for us today?

Throughout our history, we have been a victim of political manipulation by the crooked few. We once had a glorious past with representation in the legislative assembly and the panchayats. Those people who pretended to be our leaders and were elected collected all our welfare money and secured their future outside the state. The moment there is even a sign of a problem, you will find them nowhere near but in the luxuries of their home far away from the trouble. What is left now is the ruins and shambles of the glorious past we had. We are still hanging onto it but are slowly losing our grip. This is a desperate cry for intervention and guidance by our leaders from every part of the country.

SEE ALSO:  Gorkhaland - The Leaders and the People
Powered by Inline Related Posts

We thank and acknowledge leaders who are slowly rising up to our call and are standing with us. We need all of your support to ensure that the once respected and dignified culture of Gorkhas is not erased from the history.

It is Manipur today, it can be anywhere else tomorrow. This is the time which calls for us to rise beyond our narrow political agendas and regionalism and stand in solidarity with our brothers in Manipur.