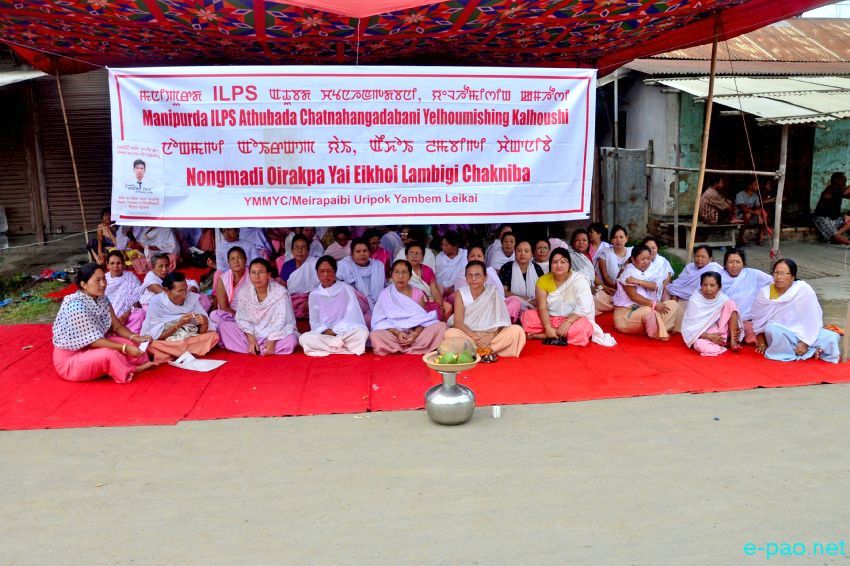 Pic via E-Pao ILP : Sit-In Protest for Implementation of ILPS and demanding punishment to killing of Sapam Robinhood on August 3 2015 :: Pix - Shankar Khangembam

Before you even start reading the article, let me be clear that I am a 4th generation Gorkha settled in Manipur. And I will accept criticism if you at any point feel that the article is a little biased. I am a confused person right now. Suddenly, after having lived for 31 good years of my life, my belongingness and loyalty towards my motherland are being questioned.

I do not write this article with pride. In fact, it is shameful that despite having been born and brought up as a Manipuri Gorkha, today I am having to publish an appeal to clarify that I too belong to Manipur. From time immemorial, it is always the majority who create history. We have never read or heard about the story of the minority. Today, I will narrate the story of the minority, the voiceless and the helpless.

Recently, there was a video circulating on social media it showed a lady who was being delivered a mob justice. She was being slapped, hit by a shaft, and ever had her hair chopped in public. Whatever be the reason, that was not the right way to vent dissatisfaction in the wake of such political crisis. Tomorrow, some other crowd might just want to do the same thing on another individual. Who is going to take the blame then? As a civilized society with such rich history and culture, a more matured approach would have given a dignity to the agitation.

We are accused of encroaching the land. We are accused of being a threat to the social fabric of the state. We are asked to pack up and leave the state. How is it even possible? We are not here staying in a rented house that we pack our belongings and move to another house. My family has not grabbed any land or encroached upon anyone else’s territory. We have papers for our land as per the law of the land. We also grew up listening to our grandmother narrating us stories of the Japanese drones flying above the roof. We have heard stories of our grandfathers fighting to protect the land alongside the British and the maharaja’s army. Are our stories any different from the stories of a Meitei, Naga, or a Kuki kid?

They say that our contribution to the land is zero. Turn any pages of the history of this land and you will find a Gorkha, Major Subedar Niranjan Singh Chhetry amongst the earliest martyrs of the land. He was hanged to death alongside Bir Tikendrajit and General Thangal by the British on 13th of August 1891.

They must have also conveniently forgotten that we are the most peaceful community in the state. We live happily with all other communities, be it the Meiteis, Nagas or the Kukis. I have studied Meiteilon throughout my childhood, I can speak a bit of Kuki, and I have lived with a Naga friend for about 7 years of my life. Like you all, we have recited Ougri Sheireng, listened to Khamba-thoibi with awe, enjoyed the colours of Yaoshang, celebrated Lai Haraoba with equal enthusiasm, and cannot live without Ironba, Nga-Thongba and Ooti as our daily staple. What makes me less Manipuri than anybody else from my state? Perhaps we are the only community in Manipur which never had any law and order problem with the state.

Despite all this, we are time and again asked to cite the history of our existence in the state. Below are some historical records of the settlement of Gorkhas in Manipur to put across the point that we are not just land grabbers and that we have taken equal part in the nation-building process in Manipur:

The Gorkha community is settled for nearly 2 centuries and has lived in an area of 140 sq. miles till 1915. Besides the army settlers, we could rear more than 10,000 cattle and buffaloes. An entire stretch of road named in Jiribam was named as Man Bahadur Limbu’s Road. Today, after almost 2 centuries, our population is not even 1 lakh. How could we possibly disturb the social fabric of the Manipuri society or even snatch away opportunities from the locals?

Today, we are as much a victim of historical circumstances, miscalculation and manipulation as all of you. We too would want to be part of the decision-making process which will segregate the outsiders from the insiders. Sadly, despite being a part of the greater Manipuri society for nearly 200 years, we have been pre-levelled as “outsiders”. Look into your hearts and think for once, how would you react, if you and your community were labelled as such?

Most of the Gorkha youths from Manipur today are working in the defence or in the metro cities. This also brings in revenue to the state. How can we possibly exploit the wealth of Manipur? I would love to know if you have seen anything unjust being committed by any Gorkha in Manipur.

Today, we live outside the state in metro cities. Ask one of your own ‘inside Manipuris’ about how does it feel to be humiliated. If you have no idea of how humiliated your brothers and sisters feel when faced with racism outside the home state, maybe you should go and speak to them. I have also felt the outrage over “racism “against our Manipuri people in Delhi and other cities, but I cannot turn a blind eye and deaf ear to numerous instances of racism here in my motherland itself.

SEE ALSO:  Ask Me How I Feel About Inner Line Permit
Powered by Inline Related Posts

In this city, we only have people; there is no Meitei, Naga, Kuki, Gorkha, Bengali, Bihari or Marwari. If someone asks me, I proudly call myself Manipuri Gorkha. Here no one accuses anyone of stealing opportunities or ancestral land. No Bihari cries of innocent people being killed, no Meitei accuses a Bihari of depleting his economy. We share rooms to save money, lend and borrow money when we are broke, we share pizzas and drinks together, we contribute to the electricity bills, we wait for each other to walk back home after office, We cook together, we laugh at each other’s jokes, we fall in love, we get married. We live happily here, but we never talk about our problems back home. Why?? Because it divides us.

We are happy out here, but why this indifference back in our own homeland?? I leave this for you to ponder upon.

2 Comments on "Introspection: A blog on Inner Line Permit, Manipur"