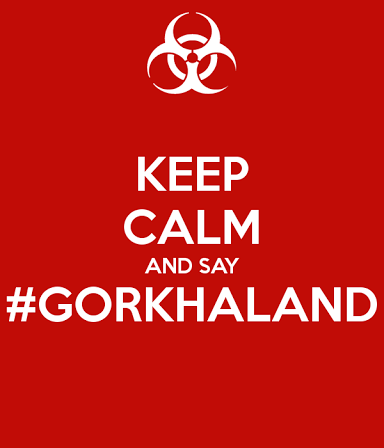 This is a familiar conversation for any non-Darjeeling Gorkha youth while discussing community issues or the Gorkhaland statehood demand. Very often people ask us questions about our ‘identity’ with regards to Gorkhaland movement and the larger Nepali speaking Indian community. What is the point for a Gorkha from Arunachal Pradesh, Manipur, Dehradun or anywhere else in the country to support the demand for a separate Gorkhaland state?

The question is natural for anyone who is not very well aware of the history of the Gorkhaland movement and the search for a larger Gorkha identity. Even amongst the youth in our community, very few of us are aware or have any interest in the bigger picture of our identity and struggle for a Gorkha state in India.

The identity of an Indian Gorkha is a stateless community spread across the length and breadth of the country, and not confined to any particular region or state of India. Stateless because the Gorkha community is scattered across different states and does not have a single state identity. Gorkhas are indigenous and have socio-cultural roots across various Indian states such as Uttarakhand, Himachal Pradesh to West Bengal, Sikkim, Assam, Nagaland, Meghalaya, Arunachal Pradesh, Manipur, Mizoram, and other states. The same community also has a strong presence in Myanmar which is an evidence of the cultural and trade route the community have treaded over centuries.

To portray the community from the Gorkhaland region as the only heir of the Indian Gorkha identity is a wrong and a misrepresentation of the Gorkha identity. Darjeeling Gorkhas should not be haughty about their region being the epicenter of the Gorkhaland cause. It is rather an honour for Darjeeling to be hosting the aspirations of Gorkhas across the country. Gorkhas of Darjeeling region in all their humility should accept that Gorkhaland is a much bigger issue than their fight against the West Bengal government. Had it been a simple fight against a state for bifurcation, it would not have taken 107 years for the issue to be left hanging. The Gorkhaland is the issue of national identity for over 1.25 crore Gorkhas spread across the country, and not just to the 15 lakh Gorkhas in the GTA region.

The sooner our leaders spearheading the Gorkhaland movement understand the bigger perspective, easier will be the realization of our Gorkhaland dream.

The Beginning of Gorkhaland movement

The Gorkhaland movement started not just because people were frustrated with the West Bengal Government for their treatment of the Darjeeling Gorkhas. The movement was launched against the Government of India for failing to recognize the aspirations of the Gorkha community across India. To understand the historical context of the Gorkhaland movement, you must understand the tragedy that befell the community during the ‘Son of the Soil (Bhumiputra)’ movement across the North East in the late 1900s. Hundreds and thousands of Nepali speaking citizens were labelled ‘foreigners’ and forced to leave their home state like in Mizoram – 1967, Assam – 1979, Meghalaya – 1980, Manipur – 1980s, and so on.

When the Gorkhaland movement started, it wasn’t merely to seek statehood for the people of Darjeeling, but to protect Indian Gorkhas from expulsion from all over India – be they from Bhagsu in Himachal or the Jaintia and Garo Hills in Meghalaya, it was for the protection of all Indian Gorkhas.

The ambiguity surrounding the citizenship of Nepali speaking Indian community had always been (and is still) a point of discussion in political, social, and immigration discourse for other Indian citizens. Our community is an easy target of any nativity propaganda due to the ambiguity surrounding our identity. This Gorkha identity and the statehood demand has eluded us for more than 107 years now and that is why understanding the roots of the Gorkhaland movement is even more important and urgent now.

SEE ALSO:  An Appeal: The Orphan Among the Orphans
Powered by Inline Related Posts

The demand for Gorkhaland is to deal with the ‘identity crisis’ facing our community across India. A separate state for the Gorkha community is the only means to reassert the identity and seek recognition for our community in India. The Gorkhaland movement is to seek a constitutional guarantee for the Indian Gorkhas with a belief that only a separate state within India would end the confusion of the Indian Gorkha Identity, who share similar language linguistic and socio-cultural heritage as the people from Nepal.

This is the reason why Gorkhaland statehood is needed to allow other citizens of our country to know, that we are as native and as indigenous as them.

Perhaps one of the biggest challenges of the Gorkhaland movement is to resurrect the interest and involvement of the masses towards the cause. In the absence of a long-term strategic planning for the movement, the leadership seems to be losing the confidence of the community. For the Gorkhaland movement to sustain, the leadership must now feel the public pulse and graciously accept constructive criticisms towards any perceived deviation from the course of action.

Today is the age of social media and the over-informed public, the administration simply cannot underestimate the aspirations of all stakeholders involved. There is a need for greater accountability and transparency on the issue. The public must know what is happening at every stage of the movement. Once connected to the internet, the world becomes flat where everybody has every bit of information on their fingertips. To simply think that the public can be hoodwinked will turn out to be disastrous for any leadership or organization representing the cause.

Along with the leadership, even the general public must act responsibly towards the cause of statehood. The Gorkhaland cause is bigger than the leaders associated with it. We cannot be indifferent to the cause of Gorkhaland state just because we do not like the way our elected representative function.

Would you discard you kid because he/she did not act the way you want? Would you rather confront him/her about the situation or act indifferent?

As a responsible community and one of the largest ethnic groups in the country, we are bound to come together and work for the betterment of the Gorkha community. The Gorkhaland statehood demand is closely associated with our identity as ‘Indian Gorkhas.’

Why I will always support Gorkhaland?

But most important of all, because I am tired of being labelled as a “foreigner,” and only a Gorkhaland state will ensure that my antecedents are not questioned.

Books, The Faces In Our Midst

Prerna Dewan Rai – Author of “The Oblique Rays of Sunshine”