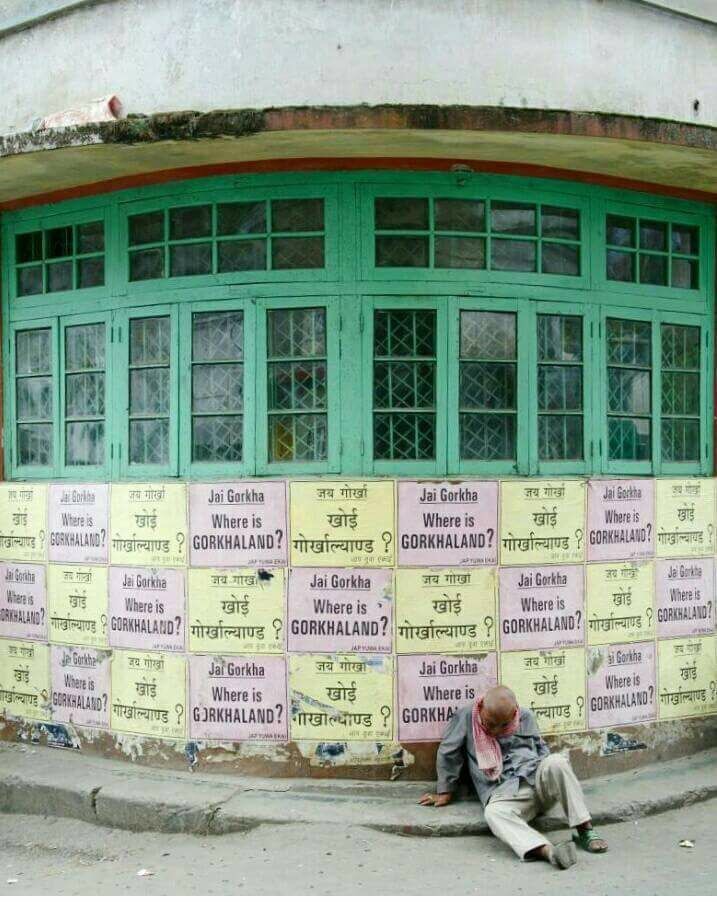 “Thettt, hattu vayo”, sighs Dhiren, while he strolls down his usual way towards home. Dhiren had a sight seeing this morning. Having dropped of the tourists after andaazi showing them Nepal, Bhutan and the Everest ko Tuppo from Tiger Hill, Dhiren just started to walk down the street “mathi thulo golaai ma gaari sepera”.

Dhiren is outstandingly happy today, as the foreigners he was entertaining in his recently purchased naya second hand Sumo Gold, tipped him decently well. The amount of the tip may have been influenced by the creative quotes that his vehicle flaunts – “Sorry Girls, I am married” and “Don’t follow me, follow God”. He frequently spits the pan masala he has been chewing, while planning to head to sila to get his tyres changed.

Dhiren has a long longggg history with Pan Masala, starting from the days of Talab and shuffling changing through Tamanna, Wiz, Parag and now finally settled at Paras. Just like tallo gaon ko bhudey shifts through his political preference depending on the seasonal popularity, starting right away at GNLF and ending at GTA2 via GTA 1, GSSS and TMC.

As for Dhiren, the only good memory he has of the colour green is that of the Kalijhar that healed his wounds when a child and the only yellow thing he likes is his dasai ko shirt.

As he continues walking, he approaches the terso street above his place, where the baato muni ko ghar belongs to fauzi bada, and as Dhiren can see, its fauzi bada himself on the terrace, neatly dressed up and reading a Nepali daily while sipping on his fika chya. If you think Fauzi Bada was dressed to go somewhere, you would be wrong. It has always been a habit for him to stay neat and dressed, and thats how his usual day starts – On his terrace, with a newspaper and a cup of tea.

Dhiren wasted no time to greet Fauzi Bada and in to time he was into the “chep ko sedi” leading to his place. Afterall, he holds tremendous respect for Fauzi Bada as he had grown up listening to the stories of his valour – the inly BadaBaw in the army from his locality.

There were things about fauzi bada that Dhiren fancied a lot. He spoke less, he spoke to the point, he was almost a teetolatter (except for his very occasional nights of 2 pegs of honey bee that he would bring from the army canteen). Unlike the other intellectuals in the locality, whose diplomatic lines didnt quite pierce the Paarey Gidi of Dhiren, Fauzi Bada would only hit at the place where it was exactly needed.

Fauzi Bada had stood strong in the front through the Kargil and Indo-Sino Wars. He had beheaded many, while himself never got a scratch. His eyes never knew fear, neither did his hands know to shiver. His feats of his bullets, grenades and khukuri were known throughout. The dreadedly feared blade only knew how to slay, and the bullets ge triggered had their contribution in shaping the map of the country we know today. All of that, he did with a smile. However, the only war he got wounded at was when he was unarmed and peaceful, fighting for his people – once at Darjeeling More and once recently at Chowk Bazaar, where even Dhiren was served few good whacks on his thighs.

Dhiren carefully notices the stitch marks on his forhead, and slowly tries to pick up on a conversation saying – “winter ma saano tattayena ta Bada”, while massaging his thighs as a gesture. The topic might have not been gone to well with him, as those incidents reminded him of humiliation and bullying, things that he wasn’t used to. An angry gaze from Fauzi Bada and Dhiren almost shits in his pants, and he just exactly knew what to do.

He quickly asked “Yo paali kosle jitcha jasto cha Bada anta?” At this, Bada became a little thoughtful and started opinionating on the prospects of every party and their agenda, ending every sentence with “kaam lagdaina yo pani”. He concluded how he had more or less already lived his life and so had his wife. He also pointed out how his children were living outside and earning their lives well. “Aabo vayo, party pani matlab chaina, neta pani matlab chaina, Gorkhaland pani tettikai ho…. Baru vote haldina”, he said.

Dhiren would stay there longer and continue with the talk, but then he had to have his food at home and run down again to Silagadi, so he started getting up with a final note – ” Thetttt…. Haina bada, kuch ta garnu parthiyo.” Fauzi Bada’s memory suddenly blazed up with the past events. He remembered getting beaten up in the middle of the road with a national flag in his hands. He got reminded of the raids, threats, harrasment, abuses and arrests he had faced. He got reminded of each and every little event that had slowly eaten up his dignity and self respect.

Dhiren too laughed on this and continued on his way home.

Be the first to comment on "The Gorkha Who is Afraid"