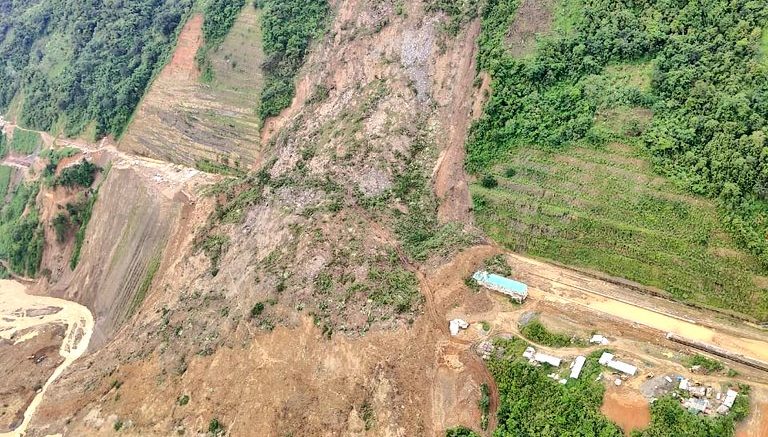 
‘Disaster Management’ could have perhaps helped save lives from the fatal landslide in Noney, Manipur argue our contributors Shikha Subba and CK Raoof of the ISEC

On the night of 29/06/22, a landslide hit near the company location of our 107 Territorial Army (TA), attached to the 11 Gorkha Rifles (GR). The B-company of the 107 Bn TA were deployed in the Noney district, to safeguard the mega-railway project under construction between Jiriban and Imphal, Manipur. So far the landslide has led to the death of 47, 18 injured and 14 still missing army personnel and civilians.

Nonetheless, the incident didn’t get the deserved media attention at the national level.

The loss of lives of army personnel on duty is limited to mourning and paying respect to their martyrdom. Beyond this, the issue deserves to have a heated discussion in the public domain regarding why “Disaster Management” failed.

In a video circulated on social media, two army officials were claiming that the norms were followed with all the soil testing activities for railway construction. Despite this statement, the issue demands a proper investigation as to why so many lives have to be sacrificed if the norms of disaster management were sensitively followed?  It is unfortunate to have such a cold response to a sensitive incident.

SEE ALSO:  On the 9th and Final Day - We Pray to Maa Siddhidatri
Powered by Inline Related Posts

According to the experts, the Ministry of Environment (2018) has indicated that most of the landslides in Manipur are due to anthropogenic factors. Despite this mistakes were made and it makes us ponder, if due focus was given on the mitigation measures, the death and injuries of the Territorial Army personnel and the other workers could have been perhaps avoided.

India is a signatory of the International Framework Disaster Risk Reduction, and our country has its own Disaster Management Act (2005) and updated Disaster Management Plans that aim to reduce the loss of lives and properties from various forms of disasters.  In general, the Act and the policy aim to reduce risk-inducing activities, like the use of heavy machinery and construction on disaster-prone areas. The haphazard anthropogenic activities in the High Hazard Zone (HHZ) like Noney invite risks, and violate the expectations of the DM Act of 2005 and NDMP.

We have advanced technically in developing inventories for all the landslide-prone districts of the country, the nature of the ecology and seasons prone to disaster are known to the administrations. As per the study by Okendro et.al. (2021), the Noney district area comes under the High Hazard Zone due to faulting. Despite prior knowledge of the vulnerability of the place, the deployment of the soldiers in base camps (as per the photos circulating on social media, the base camps were constructed out of tin, plywood etc) near the riverside during the rainy season is an insensitive approach towards a life of the soldiers and the other workers. Protection and safety of human lives could have been given priority rather than protecting the project under construction. Landslides do come with the warning and during monsoon; the flow of debris in the High Hazard Zone is expected. Therefore, the evacuation process from the High Hazard Zone is the need of the hour rather than deploying people in the High Hazard Zone. Evacuation measures from the cyclone-hit region of Odhisa provide one of the best examples of life-saving strategies of the Disaster Management Authority of the state. Similar patterns could have been followed in Noney landslide too by evacuating the people on the heavy rainy days.

The proposed railway project to address the transportation needs of the region turned out to be an invited disaster. The lacuna is not only in having appropriate regulations, but also in the implementation of the plans, sometimes in the plan itself.  Still, most of the disaster management plans are post-disaster oriented, as in the case of a landslide at the railway project site. The project should have been timely planned and technically equipped to reduce the risk of human forces involved.

The incident opens our eyes to the unfortunate reality that the safety of the safeguarding army forces and the employees were not protected with proper measures enforced by law.

The Manipur state government has announced ex gratia of Rs 5 Lakhs each to the family of the deceased and Rs 50000 for each to the injured. However, more human lives could have been saved with the proper implementation of funds for pre-landslide events by adopting safety measures through safe shelter for the TA personnel and civilians. The deployment of the workforce either as employees or the security in disaster-prone work sites should have certain rules and norms to be followed. Their stay and the working conditions should have ensured adequate safety by the employer.

*Shikha Subba – PhD scholar, Centre for Decentralisation and Development, ISEC she can be reached at: shikhasubba@isec.ac.in

*Raoof CK- PhD scholar, Centre for Study of Social Change and Development, ISEC, he can be reached at: abdulraoof@isec.ac.in

Be the first to comment on "Why does our Disaster Management System Fail? Reflections from the Tupul landslide, Noney district, Manipur "