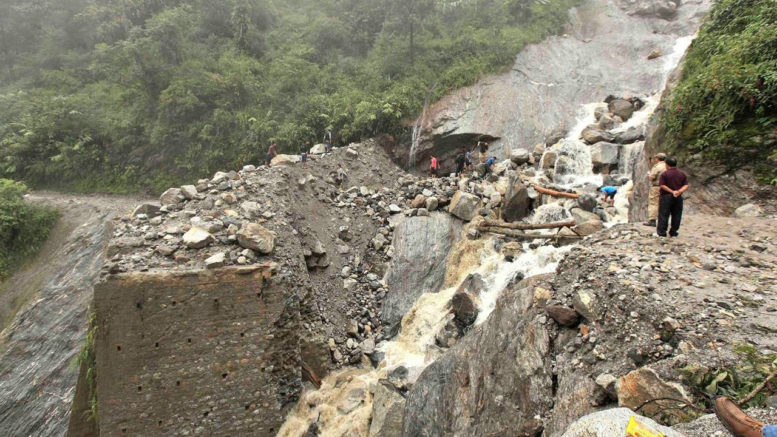 
Unspoken Unheard…. The Crisis of Environmental Degradation. (The Mountains are Crying)

Phew!!! The election fever in the hills has never been so colorfully, dramatized magnified in the agenda of the Election Campaign The good feeling of wellness swelled in each heart as the hills were telescoped from the national and state capital, eminent statesmen, celebrities, and even hookers flooded our vales and dales. Foes turned into friends, friends into foes, but for the first time in decades, politicking pushed the perennial demand of Gorkhaland to the periphery of the poll campaign. My priority is not in such details for I have long ceased to comprehend the political evolution of the hills for that matter not even the tools of the greatest contemporary social scientist would be able to figure out that.

Seriously what worries me is the signal of the short timeline in hand to address the problem of the environmental crisis in the hills but first I want to shoot you with a shotgun if you again confuse DEVELOPMENT with Construction.

Let me throw you with some arrows to awake you…” Do you remember the date of the last earthquake when you swore to God that you would never add another storey to your building? Nepal earthquake in 2018 magnitude of 7.8 on the Richter scale which killed 1200 people and injured more than 25000 people 2011 Sikkim earthquake. Just last month In South East  Sikkim then recently in Assam. These are not just earthquakes but swarms of earthquakes that last for days or weeks not only because of tectonic movement but also because of geothermal and hydrothermal according to geophysics. ( scroll to Google what they mean) This fundamentally means things have not changed.

Year after year, you and I wear a mask ( mind you not NDY mask to protect corona right ) read a story, quick to button at social media ..QUAKE BE SAFE …and we seek countless devise construed by the FB to make feel safe…Our Memory is so short-lived. So much is spoken so much is seen so much is heard, so much is learned since a kid, through schooling, through higher learning, but we like fools do not hear it until the damage is done

For the last decade, no plans have been chalked to deal with the environmental crisis by the government. Did you hear any slogans of “Preservation Conservation and Protection of the queen of hills .” in any election campaign. Maybe right now 5th h June you will hear a lot of this stuff but as the day sets so does the Slogan. Only after the tragedy or loss of lives so much is said relief is given as another vote bank.

We are not dumb to the ever-growing number of tourists and population that have been exerting pressure on the fragile ecosystem of Darjeeling Kalimpong and Kurseong hills. The hills are transformed into cosmopolitan cities and cease to be sustainable eco-tourism. If you need to understand what is sustainable tourism please do refer to the research paper (Sustainable tourism of Darjeeling Hills by Dr. Sherpa  Bhutia ) The steady deforestation accentuates the problem of soil erosion and culminates into landslide every monsoon. The problem of drying of springs and changes of the water table has been intense and constantly reminded by the N.G.O ‘Save the Hills’.

A study says by 2025 Bangalore is going to dry of all the lakes and every household would run out of water, but the government has already directed their attention to this anticipation, no worries for the city of silicon of our country.

Now back home how many of you cut down your essentials to buy water. My pocket is tight purchasing water every alternate day while in the mid-afternoon a river of wastewater runs almost 2kms down the drain, while we residents from Park to Sado Bato desperately eye this life energy, files lie with dust and dirt of our complain listlessly unattended.

The danger is spiked by the total disregard for the building norms formulated by the British colonial government. There has been a proliferation of unauthorized buildings and every nook and corner with no regard for slope stability which should be 35 degree but now incongruously castles perch on the ledge of 70, 80 degrees No doubt Insomnia cripple us at every quake or slide.

My point in quoting this reference is illuminating on a long-forgotten episode rather humorous on Public hearing through the press of the E.I.M Teesta Low Dam Project.  A handful of representatives from the public were requested to air out our opinions on the panel. Not knowing what all this about but as a young dynamic enthusiast of the environment  I piped in when I have interrogated the knowledge that I had assimilated over the years that the Teesta low dam project was a permanent time bombshell for the degradation of the hills for as early as 1928 in Colonial British the river Teesta was potent to harness the energy, but the environmental impact was so alarming for the fragile hills that the British dared not.

I quoted very honestly that  Environmental Impact Assessment stated “There are more than 15 faultlines multiple active faults lies on the highway between Sevoke to Khali Jhora along the teesta river. The Scientist feared that it would trigger earthquakes of 8 on Ritcher scale, not forgetting the landslide blab la .”At the end of the press meeting, I was like a jester of Shakespeare’s play needed to conceal the truth. The press meeting was an intentional mock programme of the Project graced with the Project Manager, director, geologist representatives of the alleys, and only we a handful of the public hadn’t the slightest clue to the purpose of our presence.

The project was the outcome of high-handed undemocratic gross violation of the laws of the land and the project authorities. Dissent of the local communities living in this gorge. How many of them were displaced with false hope and promises but the greatest fallout was the sheer arrogant disregard for the environment. If you are interested in details look up the research papers of the activists Mr. Soumitra Ghosh “ The case of Teesta low dam Project stage 111 and 1v in Sub Himalayan North Bengal.

I vehemently don’t what to pick up with “What was done cannot be undone and what is beyond our control we  let go as of the virus.”

Nevertheless, the natural catastrophe every year we lament is the true witness to testify the Natural Degradation of unimaginable magnitude. I’m MUTE…

THEN why does it become Mandatory to Celebrate … World Environment Day…Shouldn’t we be digging our own graves ..but that may be pricy too…..more merciful maybe  One quake of 8 on the Richter scale at one blow at one Go may bury us to extinction …to excavate our elements at posterity by the archeologist.

The environmental problem facing the hills is much more complicated than the virus crisis which will flatten in course of time but the environmental Degradation that has lopsided the ecosystem in balance will incur retribution ever witnessed in the history of mankind.