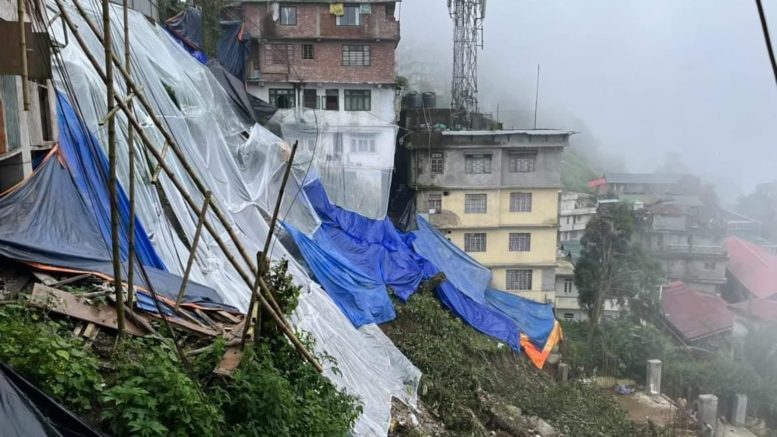 
Construction Controversy with an ongoing building site in Darjeeling, with locals forced to leave home following the landslide in Youth Hostel area. Bicky brings you the in-depth coverage.

In yet another incident of development project leading to potential disaster and construction controversy in Darjeeling, a large infrastructure project in the youth hostel area, owned and promoted by the Yashshree Group has been alleged to have put the residential houses around it at risk.

A large area of land between Gandhi Road and Dr. Zakir Hussain Road, which would “earlier be vacant and full of trees” according to the locals, was reportedly put under development for the construction of a multi-storied building by the Yashshree Group, since earlier this year. The building is supposedly a private parking place. Locals allege that the construction process involved the felling of the trees in the area, and also the use of heavy machinery and excavators (JCBs) for the excavation and digging of soil.

On the morning of 15th August, there was a large landslide on the construction site, which not only affected the project site but also multiple homes and families in the Youth Hostel area adjacent to it. Two buildings in the area were visibly and substantially damaged as a result of the landslide. The damages have subjected these buildings to a risk of complete collapse and rendered them inhabitable. In fact, one of the buildings has developed large and visible cracks on its ground floor.

Immediately after the incident, a meeting was placed by the concerned area Samaj where the Managing Director of the company, Sadip Lama was also present. After an assessment of the damages, Sadip Lama requested for the families to vacate the said buildings and offered to arrange for their relocation in hotel rooms or else to pay Rs. 3000 a month of compensation if they chose to shift to some rented place. The most affected building, also known as the ‘Yellow Building’ locally owing to its colour, had 4 families, who owned the 4 different flats in the building. All of them had to relocate immediately. The other building mostly had tenants who had to relocate themselves as well.

The municipality team visited the project site on the next day of the incident for assessment. They decided to plan their next visit for the 5th of September to properly assess the damages and check the feasibility of repair.

Meanwhile, another round of meetings was held in the municipality on 18th of August. The owner and the victims resolved the issue amicably. Sadip Lama, the managing director of the company, agreed to construct a protection wall and also to bear the expenses of the repairs of the damages done to the building. He also agreed to be held accountable if there was any mishap in these buildings in the coming days after restoration. A sum of Rs. 7000 per month was agreed to be paid to the displaced families per month for their rent.

Sadip Lama on the other hand claims that the land was used as a dumping zone prior to them beginning their construction, and that landslide was mostly dead waste falling off. He further clarified that his company had received all the clearances and permission for felling of the trees and clearing the land. He also stated that the bulldozer was only used to level the plain area in the site and no on the steep portions.

The municipality team again visited the site on 6th September 2022 for their follow-up assessment, which couldn’t so well be carried out due to the rain. When the Municipality Chairman was reached for his comment on the situation, he said that “the construction work was put to stop with an immediate effect.” He also mentioned that “the two parties had reached a mutual agreement.” He maintained that the Municipality was keeping proper track of the situation.

While restoration and compensation are only a small part of the problem, the deeper problem lies within the rapid development of such projects and the mode of doing so. There are a few questions that we are bound to ponder upon:

We hope that the administration and the municipality take cognition of the issue and provide proper justice to those affected. We hope they also take into account the nature of these projects which put the residents at risk and render them vulnerable.