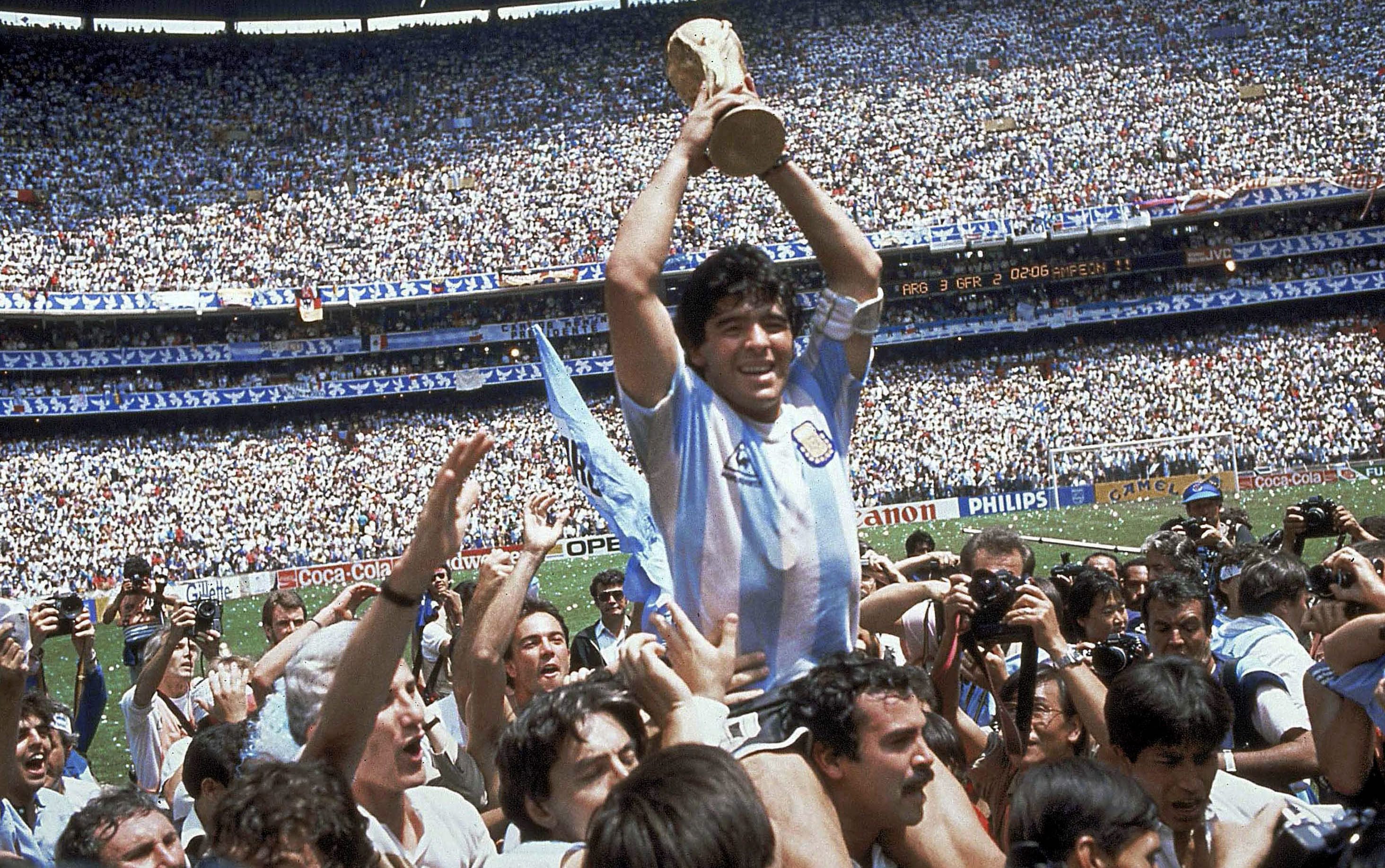 Diego Maradona of Argentina, is lifted up as he holds the World Cup trophy after Argentina defeated West Germany 3-2 in the World Cup soccer final in the Atzeca Stadium, in Mexico City.

Keshar mama has been eagerly waiting for the world cup to arrive; sick of cricket which he calls as “Mungro and Dallo ko alchilagdo game” the day of reckoning has come. He is in his mid-fifties and Argentina is his favourite team. The love affair with world cup football, I guess started from his generation, when Doordarshan telecasted all the matches of the 1986 World Cup and television entered a few privileged homes in Darjeeling and so Maradona became a god for all.

If one questions the generation belonging to “chiyashi ko andolaan ” to the teenagers of 90 ’s, everyone gets nostalgic remembering the way world cup was watched in those days. Most vividly remember those times as glory days of watching football “together”.

Not everyone could afford a television set those days and most villages had two to three television sets and the entire village swooped upon the house whose owner was benevolent enough to let everyone watch.

There used to be two groups in my village, one which religiously followed Argentina and the other followed Germany; now the question arose why a section supported Germany and not Brazil or any other team? Well, the entire ‘marad and auraat’ (male/female workers of tea estates) came to know that ‘German paisa’ was coming to the tea estate funding various social schemes for the benefit of tea garden workers. There would be open fights between these die-hard German fans with the fans of the opposing teams. Such was the craziness during world cup matches, madness spilt all over intoxicated with local ‘rakshi’ and ‘jand’. Yet in all these craziness there was a sense of belongingness, of the ‘we’ feeling, unity oozed all over the nooks and corners of the hills, not having a television set at home was beneficial for the society at large.

The only problem of watching football matches those days was the naughtiness of the television set and its antenna. With emotions on an all-time high and viewers on the edge of their ‘ pira ‘ and right at the crucial moment, the only television set in the village started to play its game.

Theet! Tesko Baw Ko” everybody shouted in disgust. Experts on television shouted on the top of their voices ‘tyoo Vartical mila na haw! The owner sometimes gave the television a big slap and loo.. the transmission continued. While sometimes he had to adjust the flat cable of the antenna at the back side of the television, ‘ayoo-ayoo’ shouted every one…’Oi tyo taar tetakai pakdi baas hai…na halli bas ni. The fellow holding the flat cable had to stay put without moving an inch.

Sometimes the cable had to be adjusted by which ever item came in handy, like locks and even books, so that the pictures came uninterrupted. If this also didn’t work then the teeth came into use, with one bite of the cable the expert tore apart the plastic coating of the cable, bend the two thin wires carefully with the fingers and attached it again to the back side of the television.

With the unpredictable weather of Darjeeling, the antenna too played mischief almost all the times, the antenna mounted on a long thin “bansh”(bamboo pole) moved every now and then, especially when the favourite team was about to score a goal. One had to slowly rotate the antenna sometimes clockwise and sometimes counter clockwise depending on whether the picture was clear or not.

“Ayaeoo…!…Ayaena.!… Ayaeoo..!…Ayaeoooo…was the communication that flowed to and forth. Now, this antenna had to be carefully tied in the exact position with “toondoori”(the thin ropes that came with the chamal ko bora).

Such were the days, this generation will never experience while watching world cup football in villages’ now. This phenomenon, of the collective experience of watching football, has vanished altogether and so has our unity.