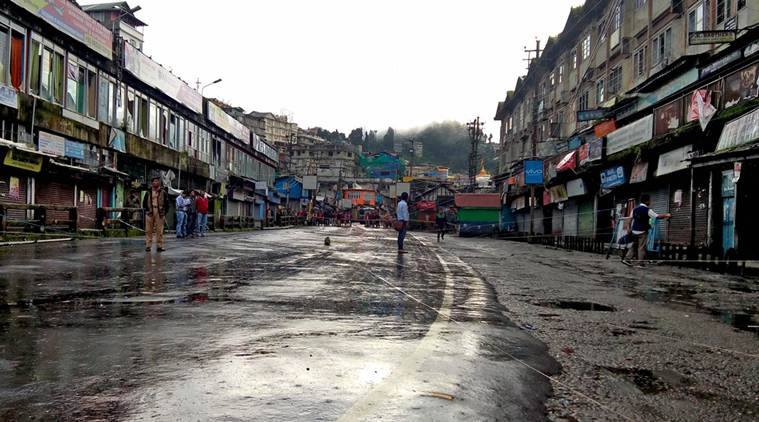 Its 11 in the morning. Dhiren is resting on the railings of the most prominent “hawa ghar” at the mall road, while he is looking around at the people sitting there or passing by. Dhiren is another semi mid-age, short height Darjeeling guy. His appearance on usual days can be described by his uneven stubbles, untidy clothes and an old pair of shoes torn and stitched at a few places. He is a driver by profession and his face reflects the typical tan and chubby feature that his regular dose of rum has left him with.

His eyes however remain innocent and are witness to his honest way of life.

Dhiren doesn’t sit on any of the green benches there, as he is more used to the railings since his younger days. That was the very spot where he would hang out with his group, rolling joints and listening to Bob Marley numbers, while the rest of the people took for the benches, or simply passed by.

That was before he got married at the age of 22, and he met his Guruji, who recruited him as a handyboy in his old spacio. It was the same vehicle where he learnt how to drive with his Guruji knocking his head time and again for any mistakes he made.

Now he is 30 and drives a sumo himself, he doesn’t own the vehicle though. He wouldn’t visit the place since then, but now it had been days of Darjeeling being shut down, and he had nowhere to go.

Dhiren dusts off his cigarette gently as he plunges deep into thoughts. The town remains shut for almost 3 months. His peak business days – the Dushera Season – may pass through the bandh, or even if it opens, it won’t warm his pocket enough anyway. This season was very important for him as he was planning to buy a second hand vehicle himself with his earnings, added to the money he had already been saving. Now he knows that he will have to wait for a few more years for the same. But then, he is proud that at least he could contribute something towards the collective dreams of his people and hence prove his love for his motherland.

He is in fact willing to go weeks without food if needed to.

Dhiren’s ears alerted by the spawning political gossip there – something he was desperately craving for attracts him to the spot where the loud voice is standing, holding a mini-court. Dhiren has got a lot of wit and humour, but then he fails to understand politics, so he depends upon others’ opinions to shape his knowledge. He placed his eyes instantly at the spot of the voice. There a young man with long hairs and a red tika on his forehead addressing a neatly dressed old person about this newly formed group in Delhi, of which he was a firm believer. Perhaps, he watched a video of one of their members talking on facebook at the Jio-Daara nearby and that baajey seems to have been the first person who would buy his outrage over the current Darjeeling leaders presently.

The young man shouted that “the leaders were useless” and that “they should come out of the hiding and sit for a hunger strike.” The Nepali newspaper that he had held under his arm was getting creased as he pressed it hard flowing in emotions. The old man could see an emerging activist there, who was pouring out all his knowledge, gained from Facebook videos, 24 Ghanta, and newspaper headlines.

Dhiren too had once tried to find his ultimate faith in them, until he had overheard the conversation between Prakash Sir and his friend. Prakash Sir lived in the same village as Dhiren did and he had always been skeptic about that group. He was rather an advocate of the intellectual lot – the Doctors and Professors of our community. As Prakash Sir was a teacher and highly respected person in his neighbourhood, Dhiren didn’t dare to counter think and took all his words as the ultimate truth.

Prakash Sir again had major differences with the Tarzaan (as Dhiren liked to think of the one hiding in the jungles) and his party. In fact Prakash Sir preferred the term “Mudey” for him and never missed a chance to crack jokes on him or his party. Dhiren’s favourite of all the punches was the one Prakash Sir had once shared on facebook. It read “Daaju haru ta Jungle ma basera Khasi ra Sungur haru Saknu aati sakyo, Haami chai bazaar basera pani vokkai.”

He however knew that Tarzaan and his people were safe and sound, possibly resting at some good hotel or resort. Once an ardent supporter of Tarzaan, Prakash Sir was left hugely disappointed by the main leaders of Tarzaan’s party going underground instead of leading from the front. Dhiren would often hear him say “Yesari video ra audio clip le pani andolan huncha ra?”

It was already 2 PM now and the arguments of the young revolutionary activist wouldn’t stop. Dhiren started to get an urge to gulp down some mugs of kada raksi, and thus he parted off the intellectual talks without anyone’s notice. His next stop was the Badi ko Dokan in Shivagram, a few minutes away from his home – the very place where he had first tasted raksi. It wasn’t even a shop, but it was Badi’s home itself where she would serve raksi and a few varieties of snacks – the reason why the business couldn’t be affected by the strikes.

Dhiren slipped in the shop through the door that was only opened midway for him as he knocked. A group of people were already on drinks that welcomed him enthusiastically, and invited him to be a part of the discussion that was apparently running.

“Taaro ko dewta vanda ta chew koi bhoot thik cha, ki koso Dhiren bhai?” asked one of them while badi served him a mug of raksi and a plate of pakoras. Everyone in the room was in the support of the local leader and they were accounting how it was Tarzaan who made the agitation possible.

It was all going well and fine till one of the people introduced the topic of how Tarzaan’s party split up and his own confidant went against him. The place suddenly became a spot of hot debate about who to support. In fact, two of them got into a serious argument.

It was only Badi’s fear of throwing them out that they didn’t get into a fight.

Meanwhile, Dhiren couldn’t understand a thing. He was already tipsy as he finished his 3rd round of raksi, and remained a silent spectator to the debate. He then realized he was getting late for home. He got some pakoras packed for his wife and his small son, and also got some isskus that Badi could secretly smuggle in from the lower busty for sale. Down the road he let go of everything that he heard or tried to understand and started calculating the number of more days he could go with his remaining savings.

He also recalled how the raksi healed the burning sensation on his thigh that the blow of lathi had caused during the lathi charge that occurred while he was in a peace rally.

He was thankful that he had narrowly escaped an arrest yesterday.

Be the first to comment on "Gorkhaland Everyday: From ‘Jio Dara’ To ‘Bagh Dhara’ – Resolute People, Missing Leaders"