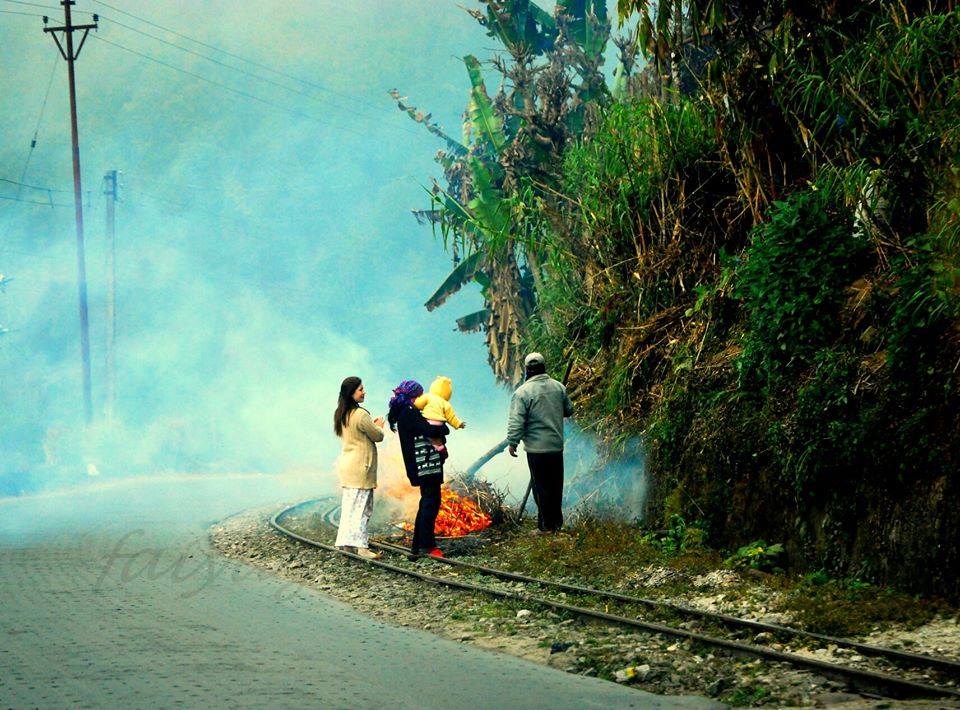 The arrival of October and the sun that surprisingly becomes tolerable, gives me a sudden reminder of the pleasant feeling that must be oozing out back in the hills. Its not the autumn or the festive season that I am thinking about. In fact, the shortening of the days, arrival of cold mornings and evenings, the clear blue sky and the comforting sun give you the hint that the best months in hills are knocking the door – those months of the winters.

For the outside world, the winters might be the time in the hills that they would dare not plan any visit to the place. Little do they know about the under currents of happiness and happenings that exist under the alarming news of low temperature that cover the front pages of the newspapers. Times must be different now with all the heaters and the “travel down to Siliguri in the winters” plans.

The winter actually segregates you into different groups to relish upon different flavours as according to where you fit. The first group includes the children and students having their winter vacations, who would wait for the entire year to keep the trend of local winter games in the hills flowing. The second group comprises of the students appearing for their board exams and taking tuitions for the same. The third group usually consists of the elder ones, who prefer keeping themselves warm around the fireplace with good company to share their “naya puraano guff”.
So this piece is an ode to the months that give you the best experiences of life, an ode to the months that see the most numbers of love stories blooming up, an ode to the months that give you snowfalls (every once in a while).

The speculations start from November itself.

“Yo paali ta nikai jaaro huney raicha… Yo paali ta hyun (snow) parcha hola” – start trending when the temperature starts taking a dive when we start entering into November. Its the same beautiful feeling that gets you going through a freezing cold season with a smile.

So a traditional winter day starts when you wake up to feel the chilly cold air playing with your nostrils. The only thing that can get you out of your warm and cozy bed is the unbearable urge to pee. And when you talk about water in the winter mornings, it is always warm water – be it to drink or to wash yourself up.

A typical Darjeelingey always knows the time and the spot around his place where the first rays of sunlight arrive, where he would join all other folks, from young to old, “gham taapnu” every morning.

But then the rich beams of sunlight take their own time to show up at most of the places in Darjeeling, giving you time to hit a few rallies of shuttle to warm up your body. What else would you want than your turn to arrive in a long queue of people with thick warm clothes and cold red nose in the biting cold? Badminton indeed becomes the “national sport” of the entire hills during the winter.

As for the kids, the winter days signify the most festive part of the year, where they have nothing to do but play. Back in the days, we would make camps, bearing carts, pipe gaari and other such things that would keep us busy for the entire day. As for the playing part, we would play cricket, football, deep goli, chungi, badminton, wrestling cards, pittoo, and everything and anything we could invest our time in.

The elder ones however would prefer “khoppee”. By the way, I really hope that most of us know the pleasure of having “laal pathar (Dhunga Mithai)” during the winters.

There are times when the sun doesn’t show up for days. But even that doesn’t stop you from going around the town. You wrap yourself up with warm jackets, mufflers and gloves, while you walk a bit faster than usual and while you breathe out fog like breath.

Fortunately, you have shopkeepers along the road with fire burning in small “Angetis” outside their shops to keep themselves warm in the absence of the customers, where you take a chance to warm up your hands “acchhuu vandai”. When you reach Chowrasta, you see that the place is alive as ever. The only thing different is that you see lesser number of tourists around and that you have more people having a warm cup of tea than usual.

Evenings are the most interesting part of the winter days. Making a fireplace with your friends with wood and cement bags stolen from the neighbourhood, and sharing infinite amount of talks and jokes around the fire, all these are the gifts that come with winter. It would be a blessed feeling to be sitting around that fire saying “agari taapda pichadi jaaro, pichaari taapda agari jaaro”. Even at home you would have an “angeti” burning, and to set the coal on fire would be a job. You would need to get the coal burning outside the home and then take it inside.

Talking about food, piro aludum, steaming momos, thukpa, and soup never feel as good as they do during in the winters. Boiled potatoes and “isskus” with “timbur ko acchar” is another thing that unfortunately goes missing these days, but used to be a charm of the winters back in the time. Winters are also a good time for people who go around “hallindai hallindai” after having a few mugs of “taato raksi”

The winter also brings with it the joys of Christmas and New Year. The time to feel the warmth of blissful carols going around and the time to celebrate the arrival of the new year with all the preparations. Half of the population would go for picnics to celebrate the new year (most of them to Tiger Hill) and the rest would be at Chowrasta (rough calculation).

Be it the old people’s talk “gham taapda” or be it the pleasure of wearing new jackets and hoodies, the winter brings with it unmatched joy and eternal happiness.

From passing the chungi to your friend to bunking the tuitions for fun, it all happens during those few months of the year that fill your heart with countless memories.