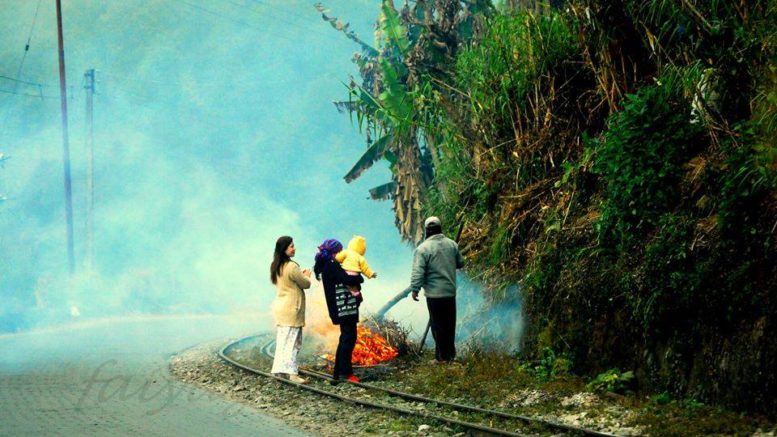 
It’s almost the end of February; yet the cold winter and the hills seem to be in endless love with each other, like a newlywed couple, each can’t keep their eyes off them. In all its coldness the ritual of “ta-ping ” is a daily affair, and even at the slightest glimpse of sun, people run to their terraces for “ -ing”

In December and early January, children and elders alike, living in tea estates, search and collect pruned tea bushes called “Jhikraa”. Once the collection is finished it is made into a bundle, a thread is used to tie it up, and carried to homes to be burnt in evenings. Collecting in a social group fostered the feeling of oneness among people and was more of a pastime for the children of a generation not yet invaded by technology, especially mobile games. The “” takes no time to catch fire; children called it “hu- ”. Not only does it provide warmth but also has a distinct beautiful aroma of exotic tea.

Sitting around soaking warmth of the burning fire of dry bamboo and dead tree trunks called “mudha”, everyone had ash, like snowflakes, sticking in their hairs due to constant blowing of wind through the pipe made out of hollow bamboo or sometimes a short iron pipe called “so-tae” so that the fire didn’t die out. Sometimes the burning bamboo wood made a distinct sound and the grandmother would say “Bokhshi Awadaicha” and other times the fire would predict whether a guest would visit our homes. Amazing were those times!

In the evening, assembling around the fire has its own set of problems; constant smoke coming towards individuals makes breathing difficult as well as brings tears in the eyes. Children chant the mantra ”Uta-Uta Haddi, Eta-Eta Masu, Uta-Uta Haddi, Eta-Eta Masu to ward off the unholy smoke. If the mantra didn’t work mother said “– ”. People always believed that if they urinated in open and on roads, the smoke would take revenge by constantly harassing in the evening. Maybe this was the reason why people from the previous generation never urinated in public or felt shy. How times and perceptions have changed!

The other problem is usually  faced by older ladies from the family, “agadi tattoo bhayera ke garnu”, “pichari chiso huncha” “abo dhad sekaw-chu”.The ladies turn their back-sides towards the fire, without giving a thought about their safety. Elders even have a remedy to cure piles, “pira tata-yara bus-na” “piles ko ram-baan”. Don’t know if it works but have seen quite a few burnt bums in my lifetime.

When the elders were out of sight, children would take out their carefully cut “Iskush ko Lahara ko Cigarette” and gingerly smoke the dry stem imitating the elders, childhood memories but not good in hindsight!

Schools are closed in winters and children used to have their own version of PUBG back then. It was played hiding in thick tea bushes or in gullies, with Guns made from whatever “Daura” resembling a gun having a trigger they could lay their hands on, and  sometimes gun made of bamboo, with “dallo pareko” paper used as a bullet. “Daura gun” was not hazardous but to be get hit by paper bullet, coming out of the bamboo gun was extremely painful and so was with sword fights with long sticks. Sometimes PUBG went to the extreme, armed with catapult, with the best of small stones as bullet and accompanied by the best rabbit sniffing “Bhatua Kukkur” of the village prey was stalked and hunted (not recommended now) in the game.

Winters has also its own set of problems especially for those mothers who manage the household monthly budget. “Jadoo ma bhat pura ruch-cha” two full plates of rice seem too little for the stomach in winters, and in a few hours one is hungry again. Only us know how appetizing a meal is with “padae kukhra ko jhol, bhat and sitra-rambera ko achar in cold weather isn’t it! Winters and Childhood was and is so awesome in the hills of Darjeeling and Kalimpong.