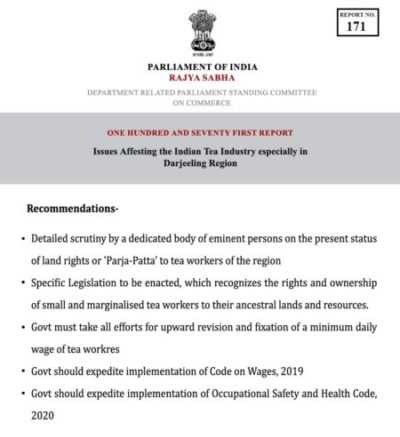 
The Parliamentary Standing Committee on Commerce has submitted a report on the “Issues Affecting the Indian Tea Industry especially in Darjeeling Region” to the Rajya Sabha Chairman and Lok Sabha Speaker on the 15th of June 2022.

The report has been made public, only now.

The Committee constituted on the 13th September 2021 has highlighted some of the prominent issues plaguing Darjeeling Tea industry and suggestive measures to overcome the problems with an aim to bolster the efforts of the government in achieving long-term sustainability of the performance and growth of the tea industry.

Here’s an overview of the report which we found it relevant to the people of Darjeeling Hills, Terai, and Dooars:

The Committee notes with dismay “the plight and deprivation of the tea workers and deplores the feudalistic set up in the region to alienate tea workers from their basic land rights despite seven decades of independence which starkly undermines the clarion claims of 7 successful land reform movements in the country”.

It further notes that “the perpetual struggle of tea workers to seek rights for their own lands not only for living but even for burying their dead family members is unfortunate and saddening.”

It strongly recommends the Government to immediately undertake a detailed scrutiny by a dedicated body of eminent persons on the present status of land rights or ‘Parja-Patta’ of tea workers of the region and take corrective reform measures to ensure land rights to tea workers.

The report recommends that “a specific legislation needs to be enacted which recognizes the rights and ownership of small and marginalised tea workers to their ancestral lands and resources.”

The Committee takes strong note of the “merger wages being paid to tea workers of Darjeeling and other areas of North Bengal, which is below the statutory threshold of minimum wage in the country.” It notes with concern that “insufficient wages which are minimal to the extent of not meeting the basic needs of workers manifests a severe crisis in the tea sector.”

The Committee recommends that the Government must take all efforts for the upward revision and fixation of a minimum daily wage of tea workers. The threshold of minimum wage should be fixed only after a consensus has been reached between tea planters and tea workers’ unions which would ensure the workers an adequate wage that increases their purchasing power and keeps pace with the cost of living.

The Committee also recommends the Government to expedite the implementation of Code on Wages, 2019 which would give a legal force and clarity on ‘in kind’ components and monetised value of facilities in a wage component.

The Report has noted the abject working and inhumane living conditions of tea labourers and the blatant violation of socio-economic justice wherein workers, with many female workers have to endure an abysmal and dismal life with no access to basic amenities and living standards.

The report views that inadequacy and lack of political will in executing Plantations Labour Act, 1951 has led to deterioration of working standards of tea labourers.

It recommends the Government to endeavour for ensuring welfare measures, health and housing benefits and decent working conditions for labourers in tea sector and implementation of Occupational Safety, Health and Working Conditions Code, 2020 which would stipulate obligations for providing welfare benefits in both cash and kind components to the tea labourers.

The committed has taken cognizance of the emergence of Small Tea Growers (STGs) as primary stakeholders in tea sector and the need to bring them under the purview of promotional schemes of Tea Board. The committee has proposed that a policy review to be done for making specific regulations for STGs produced tea as GI registered product at par with 87 tea estates.

The report also recommends that “Proper channels for marketing of tea for the tea growers should be devised and an e-auction centre should also be established in the Darjeeling district.”

The Committee report also recommends several structural changes in the functioning of Tea Board, disbursal of pending subsidies to tea gardens, and that the role of Tea Board should be redefined as a facilitator instead of a licenser.

Another important recommendation noted in the report is that “the Department should prepare a database of plantation workers at the earliest for extending welfare facilities to the targeted beneficiaries through Government Schemes or Direct Benefit Transfer.”

It also recommends “speedy implementation of Occupational Safety, Health and Working Conditions Code, 2020 which would stipulate obligations for providing welfare benefits in both cash and kind components to the tea labourers.”

Another important recommendation that the committee has made is that with women comprising the bulk of tea garden workers “warrants their empowerment by encouraging their participation in Tea Trade Unions and Associations. The presence of women labourers in decision making would thus ensure resolution of issues that concern their welfare and development. Also, anganwadi kendras for women and children, Ayush health and wellness centres, skill development centres and proper education facilities should be established and facilitated for the overall well-being of women labourers.”

Besides representative of tea garden and planters’ associations, the following tea garden workers’ union and representative of Small Tea Gardens from Darjeeling Hills Teai and Dooars region have testified in the parliamentary committee meetings and their statements have duly been recorded and considered in the report.

You can download the detailed full copy of the report below