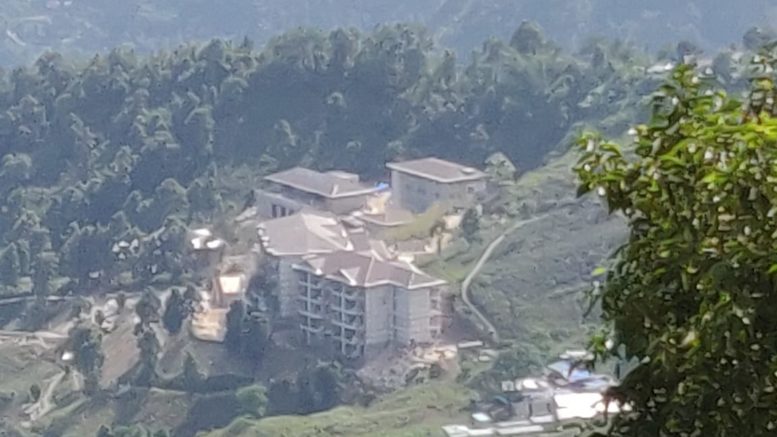 In Pic: Massive structure coming up in Makaibari Tea Estate, which is apparently being constructed in collaboration with the Taj Group of Hotels


West Bengal Cabinet’sdecision 31st of Oct 2019 permits for 15% of the land in tea gardens to be used for “tourism purposes”. They have further said that the maximum land that can be diverted to tourism should not cross 150 acres. The WB Cabinet has further mandated that the tea garden owners can make construction in 40% of this land.

Most reporting, have sugar-coated this alarming decision as to the “West Bengal government’s move to promote tourism in the hills”.

Nothing could be further from the truth.

In gifting tea garden land to their financiers in the Tea Industry, the TMC government is trying to further marginalize the real owners of the gardens – the workers and their families. For over 200-years, the tea garden workers have put their blood, sweat and heart to run the tea gardens. Yet, till date the West Bengal government – be that of Congress, Communists, and now TMC have vehemently refused to grant land rights to the families that work in the tea estates.

Even today, the tea garden workers are treated as indentured labourers, they are forced to send a family member to work in the tea garden, and if they do not send a family member to work for the garden, the tea garden management can ask them to vacate their homes and leave. It doesn’t matter for how long a family has served the tea garden, they have ZERO RIGHTS when it comes to owning land that they can call their own. Case in point, a couple of years ago Makaibari Tea Estate refused to give permission for a retired family to repair their home citing the fact that no one from their family was working in the tea estate anymore. This forced that family to make a choice, either stay in that dilapidated house or leave the tea estate and go find shelter elsewhere.

Not having land rights deprives our brothers and sisters in tea gardens in the most fundamental way. Any day the tea garden owner or the government of the day can force them to leave. Case in point, the workers from Chandmuni tea garden near Matigara were kicked out on the pain of death, to make room for Ambuja Housing lead Uttarayon complex.

How can a government elected by its people decide in favour of the owners, but not the workers?

That happens because the West Bengal government never gave two hoots about the Gorkhas, Adivasis, Rajbanshis who form the majority of workers in the tea gardens. For those in power in Bengal, we will always remain “ora – the others”

Scarcity and the sweetheart deal

Darjeeling is a prime tourism destination but the locals don’t have any land rights. Every succeeding West Bengal government has cunningly kept the locals deprived of their right to land by denying them ParjaPatta. The two entities that own the largest land in Darjeeling are tea gardens and the Forest Department. With land so scarce, anyone with large tracts of land will automatically go onto dominate the tourism industry.

Basically the tea gardens are LAND BANKS which the West Bengal government can use for any purpose – gifting it to their friends, selling it off, logging it and extracting resources from it; without any need to take consent from the very people to whom this land belongs – the locals. From around 50000 acres of land that the tea garden hold, the West Bengal cabinet has decided to permit around 7500 acres to be diverted for tourism purposes.

This means, in a prime tourism destination that is Darjeeling – now tea garden owners are going to be the largest LANDOWNERS. It is important to understand this, due to the decision by TMC lead West Bengal Cabinet from being LAND LESSEE the tea garden owners will effectively turn into LANDOWNERS.

As of today, the tea gardens are leased out to their owners for a period ranging from 25-30 years. They are charged a very nominal fee for the use of land, as tea gardens are labelled as “employment generating units”. According to the provisions of West Bengal Land Revenue Act 1955 (amended in 2015), while a hotel set elsewhere is defined as “commercial industrial unit” and pay around ₹ 1500/acre inland revenue annually, tea gardens only have to pay ₹30/acre. This means for every acre of land used for tourism in Tea Gardens, the owners will have to pay Rs 1470 less than the rest.

Imagine the absurdity of gifting over prime tourism land to the current owners, without developing any due processes on who will get the land, how will that land be used, how much revenue will be paid, how will the revenue earned by the tourism operation in the tea gardens be shared among the workers, who will be employed – under what terms, and so on.

Legitimate concerns over this illegitimate decision

Land, as I have mentioned above is the most precious resource in Darjeeling – very few own it. As such tea gardens have continued to change hands over the decades. Tea garden owners have continued to abandon their gardens and flee without paying the workers their wages, provident funds, gratuity and so on. In case of a tea garden owner not paying the workers their wages, bonus or PF, will the Govt of West Bengal have the right to seize funds from the tourism operation of the garden and use it to pay the workers debt? or will the tea garden owners be permitted to keep the earnings from tourism operation separate from their tea estate operation?

Because, I am sure in the next decade or so, most tea garden owners will report negative earnings from their tea production operations and will want to shut down the gardens, while retaining the tourism part of the garden citing investments already made to develop the tourism infrastructure.

What will the West Bengal government do, if tomorrow someone like their Rajya Sabha MP KD Singh decides to run away abandoning the tea gardens without paying the workers, but having built a massive tourism infrastructure by securing funds from legitimate businesses in India or Abroad? Will the Govt of WB has the right to confiscate their infrastructure, or will those tourism operations be permitted to continue, until someone else runs and the garden and goes through the same motions till the entire plantation is replaced by tourism operations?

What is most shocking about this whole deal is that this is being painted by pro-TMC media as this “God-sent-Deal aimed at reviving tea industry, promoting ecotourism, increasing employment” etc.

Tea Industry will be revived only when each leaf of tea produced in Darjeeling is accounted for and revenue generated from the same used for the development of Darjeeling region, instead of funnelling it out to pay for expenses elsewhere.

As for increasing employment, will these five-star hotels that will come up in the tea gardens eventually be mandated to employ local youths or is it a ploy being used by West Bengal government to push out the locals from the tea gardens, and cause demographic changes in the region?

What will be the impact on the local environment, culture, traditions, social fabric when these massive resorts are allowed to operate? As we have seen in the recent case of Hotel Ramada, an employee from Orissa tried to rape a local girl, and instead of taking the case to the police, the hotel did their best to hush up the matter. Won’t this leave our youths more vulnerable to exploitation?

By permitting diversion of land from tea plantation to tourism purposes WB Govt has effectively made the tea garden owners the richest business entities in Darjeeling. What right does WB Govt have to grant lands to these people, at a subsidized rate, but not give even an inch of land to the very workers who have dedicated generations of their lives for tea gardens?

This frightening decision which could eventually end up uprooting us is being imposed on our place and people without any consent from us. We will either have to oppose this or stand to lose the very land that we have been fighting to have our identity based on.

Save Our Mall Road

The bullet didn’t kill me…

STRANGER IN MY OWN LAND