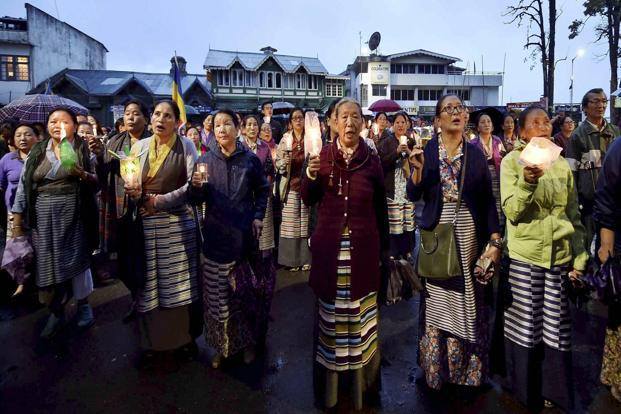 Frantic calls from friends and family who are living outside Darjeeling, this has now become our main source of hearing the “breaking news,” and also the frequency of calls, is how I have started to adjudge the seriousness of any such event. Due to internet ban for over 63 days now, and ban on local news channels, we have to rely on these phone calls to know what is happening in our region. Lack of proper avenues to get information from has deprived us of our fundamental right to information, and also this has allowed numerous rumours to float around, and people are really confused as to what is true and what is not.

The ongoing Gorkhaland agitation has claimed 10 lives so far – 8 were shot dead by security forces, one GJM cadre died when the vehicle he was travelling in met with an accident while he was on his way to attend a rally, and one Civic policeman was killed in a blast that took place in the Kalimpong thana premise.

10 dead in merely two months long agitation is a lot, every life matters, and what is most tragic is that all those who have died are our own brothers, be they a GJM cadre, a GNLF cadre, or a Civic policeman.

The overreaction of the security forces notwithstanding, the two blasts that have shocked Darjeeling and Kalimpong point towards a very sinister ploy to perhaps take the Gorkhaland agitation down the same route that we have walked earlier during the 1986-88 period. In 1986 too, the violence that followed – done by both security forces and Gorkhaland supporters – began with similar blasts in Kalimpong police station.

How is it possible that after 31 years, something eerily similar would be playing out right in front of our eyes? The players are indeed different; however, the play is still the same.

As local media have been curtailed, wide-ranging speculations are afoot on who is responsible for the blasts.

While the needle of suspicion on the recent blasts swings from one group to the other, the fact that GJM Chief Bimal Gurung’s repeated speech along the lines of “this is a trailer… and picture Abhi baaki hai” makes him a prime suspect in the eyes of everyone who is not from the hills, including the administration; who have filed cases against him under various sections that relate to terrorism.

In response, he has shot off a letter to the Home Minister asking for NIA investigations into the blast. Among other things in the letter, he writes, “Sir every Gorkha is today wondering as to how is it possible that an FIR is filed this early, in such a serious matter, while the investigations have not yet begun? In filing the FIR this early, without proper investigations, the Bengal government has revealed their own hidden agenda of entrapping the GJM leadership on another series of trumped up charges.”

The letter further adds, “Sir, the blast site is situated right next to the Darjeeling Sadar Police station, and currently heavy police force has been deployed in the entire Darjeeling region. So how is it possible that the police wouldn’t or didn’t see someone planting a bomb in the middle of the night, so close to their own premise? It is either a case of gross incompetence on their part or a case of fake blast planted by state agents to frame the GJM leadership.”

Indeed these are serious issues that need to be looked into. The Darjeeling SP Akhilesh Chaturvedi has clarified that preliminary investigations pointed the needle of suspicion towards Bimal Gurung and his coterie.

However, there is a huge section of the population even in the hills, who do believe that nothing would have happened without Bimal Gurung’s consent and that it could be GJM or a faction within GJM – a splinter group of sorts, that may have caused the blasts.

In relation to the blasts, however, the hands of those who do not want Gorkhaland state to be formed or talks to begin, cannot and should not be ruled out.

Meanwhile, some Bengali vernacular dailies have today headlined with the news that Darjeeling blasts were conducted by “NSCN of Nagaland in collaboration with the Gorkha Liberation Army, caused by hired militants from Nepal, who are Maoists, and the top GJM leadership are in touch with them.” What the reputed daily has failed to mention is, which faction of NSCN – there are two NSCN (IM) and NSCN (K), they have also failed to state which faction of Maoists in Nepal, there are numerous. Should credence be given to such a report which generalizes in such manner? I am not sure.

The fact of the matter is that, as of now, it may be too early to speculate on who caused the blasts, and perhaps we should all wait for the investigations to be completed before we start blaming one group or the other. However, it will be prudent for all concerned to remain vigilant and report anything and everything suspicious to the police.

Violence in the form of blasts, no matter who caused it, can see a repeat of the horrors we have already lived through in the recent past, and everyone in our Hills, Terai and Dooars and across the country should speak out against it.

If the blasts were caused by those who are supporting Gorkhaland, please take time to ponder over the fact that if we were to get Gorkhaland by going down the violent path, we would have had our state back in 1986 itself. All that violence has ever achieved for us is heartaches – families are torn apart, brothers killing their own, children left without their mother or father, numerous women being raped and murdered, a whole generation of youths ruined due to the violence and its aftereffect.

If the blasts were caused by those who are opposed to the Gorkhaland state, please realize that we live in a very sensitive region bordering four different countries. Any outbreak of violence here can mean a national security nightmare. So please desist.

The hopes, dreams and aspirations of the people in this region have been made abundantly clear, in that, today is the 67th day of strike and people are still supporting it. People here simply don’t want to remain a part of West Bengal, and the earlier both the Central and the Bengal government realize this and respect the aspirations of the people, the better it will be for all involved.

Despite these bleak times, I request all to take solace in these lines, “when I despair, I remember that all through history the ways of truth and love have always won. There have been tyrants and murderers, and for a time they can seem invincible, but in the end, they always fall. Think of it–always” once said by Gandhi Ji.