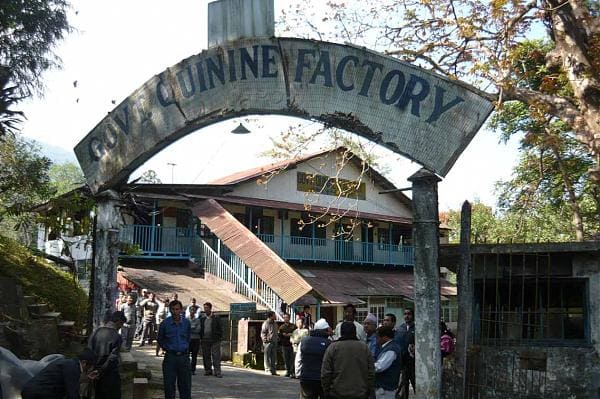 
As the world fights against Coronavirus, two words have dominated conversations in our Darjeeling and Kalimpong hills – Hydroxychloroquine and Cinchona. There is excitement among certain sections of the people that finally our Cinchona plantations will be given their long-awaited look by the Government. This article sheds light on our Cinchona plantations and presents to you the grim situation facing this sector and the opportunities therein.

The Cinchona Plantations in Darjeeling and Kalimpong hills, although with a history as old as the tea plantation in the region, has not been able to evoke the same romanticism as its world-famous tea or tourism. Cinchona cultivation in Darjeeling region can be tracked back to 1861-62 under the direction of Dr Thomson Anderson, Superintendent of the Royal Botanical Gaden, Calcutta. Back then Malaria was the leading cause of death and government needed these plantations to provide quinine to the hospitals.

By 1906, Rangju Valley Block – comprising of Rangbi and Mungpoo Divisions; and Rayang Valley Block consisting of Sitong and Labdah Divisions were established. Today looked after by the Directorate of Cinchona and other Medicinal Plants under the Food Processing Industries & Horticulture Department, GTA the Directorate looks after four plantation spots

Spread in an area of 26181.50 acres, at the heights of its operations, the Directorate provided employment to around 7000 people – out of whom 57 were officers, 5350 daily workers, 1204 institutional official, 68 office employees in Kolkata and seasonal workers whose number varied according to the season. In addition to producing the lifesaving Anti-Malaria drug Quinine, they experimented with other plants like Cephaelis ipecacuanha, large Cardamom, Rubber, Mulberry, Turmeric, Mandarin Orange etc.

As of 2015, the Cinchona Directorate had shown plantation of various medicinal plants at 8406.65 acres.

Four factories – two based in Mungpoo and two in Rongo processed Quinine, Ipecac, Dioscorea composite and other such derivatives. However, sadly the factories started to be shut down one by one. Mungpoo factories that produced Quinine shut down around 1995, Factory producing of Emetine hydrochloride, a product of Ipecac was shut in 2000. Factories producing Diosgenin (used in steroids) from Dioscorea was shut in 2005.

Majority of those we spoke to, attributed shutting down of the factory to the lack of demands and availability of cheap chemical alternatives available in the market.

However, like with all inefficiently run government operations, the Cinchona Directorate failed to overcome the bureaucratic red-tapeism, which actually lead to its doom. Being a Govt of WB undertaking the Directorate would auction off the products – which made it difficult for buyers to undertake a long term commitment to buy products. If someone got extracts this term, there was no guarantee that the same person would win the auction again. A long-drawn-out auction process also took valuable time. Due to this, buyers gradually moved elsewhere to procure supply that would be guaranteed.

Also, availability of cheap chemical alternatives in the market, greatly reduced reliance on natural products which were too cumbersome to process and procure, as compared to chemicals that could be easily procured and scaled according to the needs of the market.

Because of these reasons, the Cinchona Directorate has constantly been a burden on the exchequer, almost to the tune of Rs 30 crores per annum. Moreover, due to non-functioning factories, precious opportunities are being lost, which could have been utilized otherwise.

Although the Directorate of Cinchona and other Medicinal Plants has been moved away from West Bengal government, the Gorkhaland Territorial Administration has not been able to take advantage of this amazing resource pool we have in the hills. We have also failed to utilize the expertise of the scientists and researchers associated with this directorate, to help in other spheres of farming and agriculture. If we let things be, it is for certain that the Cinchona plantations will meet with the same fate that Aloo Bari across Darjeeling and Kalimpong faced. Gradually we will lose this huge economic and employment generating institution we have.

Back in the 1990s there was a talk of Unilever tying hands with Cinchona Directorate to develop plants and produce as needed in the market. However, politics happened and the then CPI(M) government backed down from the deal. However, that potential still remains.

As the world turns its ways towards organic and natural products, there is a huge national and international markets available for natural medicinal plants products. We can turn Mungpoo, Sitong-Latpanchar, Rongo and Munsong into an international hub for natural medicines. We can work with the Govt of India to help establish a CSIR-Medicinal Plants Research Institute and try and tap into new natural medicine market. We can also work with the Horticulture department to help with the expansion of natural food and fruits, floriculture and other avenues can also be examined. National Dairy Development Board can be invited to establish a Dairy Research Center in the region, and it can be integrated with our natural and holistic medicine researches. Grassroots driven Home-based tourism can also be promoted in the region to increase local employment and earning opportunities.

But for this, we need to have a vision – a plan and will to execute this plan.

In 1934, German scientists created the synthetic chloroquine as part of a class of antimalarials, Hydroxychloroquine is the less-toxic version of chloroquine. These are chemically derived products and have nothing to do with Quinine produced through Cinchona barks.

So no, Cinchona cannot save you from COVID19, but You can help save Cinchona Plantations