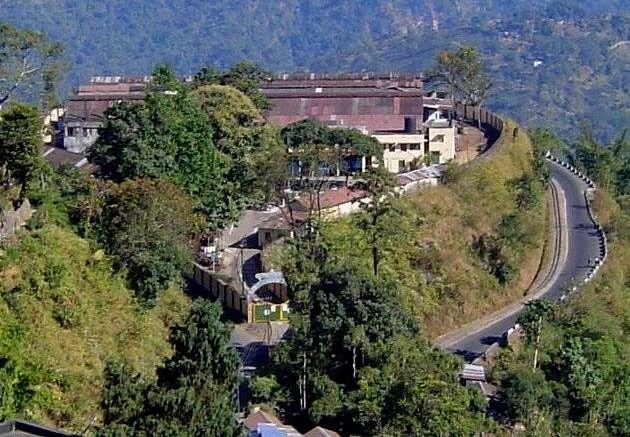 Last year DHR celebrated 104 years of Tindharey Works. It has always been considered a location relatively safe from landslips but this was to change in 2011.

Until the early 19th Century, the Darjeeling Hills was heavily forested and largely unpopulated. I am not certain as to exactly where the area which is now Tindharey lay in relation to the borders of the kingdoms of Bhutan, Nepal and Sikkim before the British Raj purchased land around Darjeeling and Kurseong from Sikkim as sanatoriums and summer resorts.

The first roads into the area, to link Siliguri and Darjeeling, was the Pankabari Road up to Kurseong and then the Military Road across to Darjeeling. However, these were steep mountain tracks suitable only for pack horses rather than wheeled carts. The Hill Cart Road (now NH55 Tensing Norgay Road) was built around 1861 with a steady gradient up which two bullocks could haul a cart. It was largely along with this formation that the DHR was constructed in 1879 – 81 to reduce the almost prohibitive cost of taking supplies up to Darjeeling and bringing down the products of the rapidly developing tea industry.

Tindharey was built as a ‘railway town’ by the DHR around its mechanical headquarters. It is said that the location, which is logistically illogical for a workshop, was chosen for being the lowest point in the Darjeeling Hills, on the DHR, where the British employees could work year-round. It should be remembered that, at that time, Siliguri was just a very small settlement around the railway junction between the North Bengal Railway from Calcutta (through what is now Bangladesh) and the DHR up to Darjeeling and considered to be a most unhealthy location to spend any time.

The current workshop complex at Tindharey was not built until 1913 – 15. From 1881 until then, it is assumed that the large locomotive shed there, with the godowns around it, was also used as the workshops for major locomotive and rolling stock repairs. This would make sense as the Chief Mechanical Engineer’s bungalow and the Mechanical Department offices were adjacent to it. The original bungalow was a single storey wooden structure with a veranda, similar to many of the Tea Planters bungalows of the period, but was replaced in the mid-1940s with the current two-storey building in the then fashionable Indian interpretation of Art Deco style – which can also be seen at Darjeeling Station. The office building was destroyed during the political disturbances of the mid-1980s – although the remains still exist.

The first railway colonies were built around Tindharey station and the Locomotive Shed and include the bazaar area. Later ones were constructed further down the hill nearer to the new Workshops. I don’t know if it still exists, but the only street map I have seen of Tindharey was (2004) framed in the electric generating plant in the Workshops and also had the power lines into the town marked on it.

The opening of the new Workshops (which are just about to celebrate their centenary) coincided with the major expansion of the DHR system with new lines from Siliguri to Kishanganj (connecting with the metre gauge line to Katihar) and up the Teesta Valley (to develop international trading with Tibet at Kalimpong). Other developments at this time included the hospital at Tindharey, new headquarters offices for the DHR at Kurseong (adjacent to the station), the DHR Club at Kurseong (now All India Radio) and a new railway colony at Kurseong, which incorporating the railway officers’ residences above what is now the Tourist Lodge.

Until the DHR company sold out to Indian Railways in 1947, the method of working the line was very different to that of today. Not only were the now-extinct freight facilities considerably larger (and more profitable) than the passenger services but all train operation was based at Tindharey. Therefore Tindharey was home not only to the workshop overhaul staff but to most of the routine maintenance staff, loco drivers, firemen, sanders, guards, jamader / brakesmen etc. Locomotives and their crews all started from Tindharey and worked on a cycle of diagrams which might involve spending one or more nights away from home at Darjeeling or Kurseong or Siliguri. One retired driver told me that at the height of the spring tea season, he had to make four round trips between Tindharey and Sukna each day to clear the loaded wagons off the Hills as fast as possible for a larger loco to assemble longer trains onwards to Siliguri and transhipment onto the Broad Gauge for Calcutta.

The DHR employed at Tindharey

This list does not include Civil Engineering and Permanent Way staff nor other Commercial passenger or freight staff based at Tindharey (as the inventory does not split the location of these establishments).

The Mechanical Engineering Department did not function as separate Open Line and Workshop divisions – only maintenance (all types) and train crews.

Although all the above employees were based at Tindharey, some of their work-output was actually for the DHR extension lines from Siliguri to Teesta Valley or Kishanganj, not the DHR mainline to Darjeeling.

It is probable that the above establishment levels were much higher than those in the 1930s since the DHR had only just started reducing its operations after World War II – when road traffic was restricted, many special trains were run for the Army (both rest leave and medical convalescence in the Hills) and Tindharey Workshops was undertaking production of many Broad Gauge railway components to allow other railway workshops in India to increase the output of military hardware.

Today, Tindharey is best described as a ‘ghost town’; a shadow of its former self. The DHR no longer runs services to Teesta Valley and Kishanganj or freight trains and the remaining passenger services are now based at Darjeeling and Siliguri. Only a much-reduced establishment at the Workshops, the last in India to give heavy repairs to steam locomotives and wooden bodied coaches, remains to give local employment. Even the passing trade of cars, taxis and buses up the Hill Cart Road requiring refreshments has ceased because of landslips either side of the town in 2010 – 12 and again recently.

It is hoped that the soon-to-commence UNESCO Comprehensive Conservation Management Plan (CCMP) for the DHR will recognise that all the non-railway, environmental, social and cultural criteria of the World Heritage Site listing (as well as the obvious railway elements) are summarised in the railway town of Tindharey and that a sub-plan can be developed to give the area a sustainable future and hope.

Darjeeling’s Steam Train to Whistle in Matheran Next Year

Railways to Report to UNESCO Over Darjeeling Heritage Railway Losses