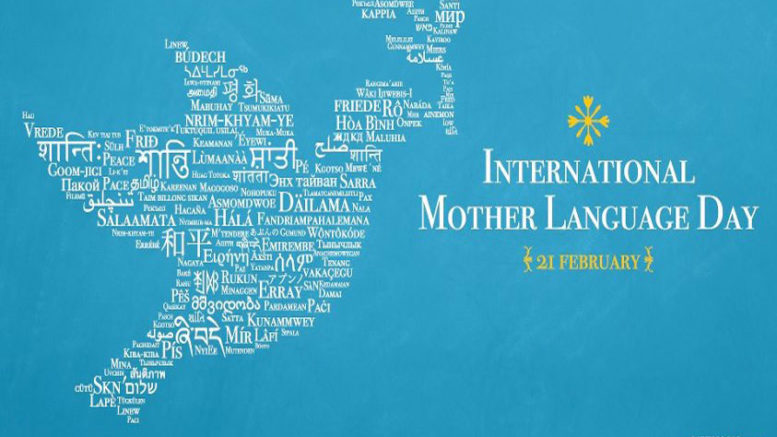 
The theme chosen by UNESCO for 2019 for the International Mother Language Day is “Indigenous languages matter for development, peacebuilding and reconciliation”.

The year 2019 is also being observed as the “International Year of Indigenous Languages” with the same theme.

February 21 is celebrated as the International Mother Language Day since the year 2000 which was proclaimed by the General Conference of the United Nations Educational, Scientific and Cultural Organization or UNESCO in November 1999 (30C/62).

The United Nations General Assembly in its resolution A/RES/61/266 called upon the Member States “to promote the preservation and protection of all languages used by peoples of the world”. By the same resolution, the General Assembly proclaimed to promote unity in diversity and international understanding, through multilingualism and multiculturalism.

The resolution was suggested by Mr Rafiqul Islam of Canada to Mr Kofi Annan, Secretary General of UN in 1999 requesting him to take steps to save all languages of the world from possible extinction and the date February 21 was suggested as this was the day when students in East Pakistan (now Bangladesh) who rose in revolt against the then Government of Pakistan’s decision to make Urdu the national language of Pakistan as was the dream of Muhammad Ali Jinnah. On this day many students were shot dead who came out to protest in police firing. In 1956 the National Assembly declared Urdu and Bangla the official language of Pakistan. This movement culminated in the birth of Bangladesh in 1971 and the only country to gain independence through the language movement where they fought to preserve Bangla as their language, culture and identity.

“Languages are the most powerful instruments of preserving and developing our tangible and intangible heritage. All moves to promote the dissemination of mother tongues will serve not only to encourage linguistic diversity and multilingual education but also to develop fuller awareness of linguistic and cultural traditions throughout the world and to inspire solidarity based on understanding, tolerance and dialogue.”

“UNESCO believes in the importance of cultural and linguistic diversity for sustainable societies. It is within its mandate for peace that it works to preserve the differences in cultures and languages that foster tolerance and respect for others.

Linguistic diversity is increasingly threatened as more and more languages disappear. Globally 40 per cent of the population does not have access to an education in a language they speak or understand. Nevertheless, progress is being made in mother tongue-based multilingual education with a growing understanding of its importance, particularly in early schooling, and more commitment to its development in public life.

Multilingual and multicultural societies exist through their languages which transmit and preserve traditional knowledge and cultures in a sustainable way” — from the United Nations International Mother Language Day.

The message from Ms Audrey Azoulay, Director-General of UNESCO says, “Indigenous peoples have always expressed their desire for education in their own languages, as set out in the United Nations Declaration on the Rights of Indigenous Peoples. Since 2019 is the International Year of Indigenous Languages, the theme of this year’s International Mother Language Day will be indigenous languages as a factor in development, peace and reconciliation

peoples number some 370 million and their languages account for the majority of the approximately 7,000 living languages on Earth. Many indigenous peoples continue to suffer from marginalization, discrimination and extreme poverty and are the victims of human-rights violations (…). On this International Mother Language Day, I thus invite all UNESCO Member States, our partners and education stakeholders to recognize and enforce the rights of indigenous peoples.”

To foster sustainable development, learners must have access to education in their mother tongue and in other languages. It is through the mastery of the first language or mother tongue that the basic skills of reading, writing and numeracy are acquired. Local languages, especially minority and indigenous, transmit cultures, values and traditional knowledge, thus playing an important role in promoting sustainable futures.

And so keeping this in mind we need to delve deep in our hearts to speak our mother tongue and work in a language of the state. We need to safeguard our language and if we don’t then we will extend a hand in its extinction. In India, so many languages are on the verge of extinction and it is said by UNESCO that every.

Darjeeling’s Steam Train to Whistle in Matheran Next Year

Be the first to comment on "International Mother Language Day"