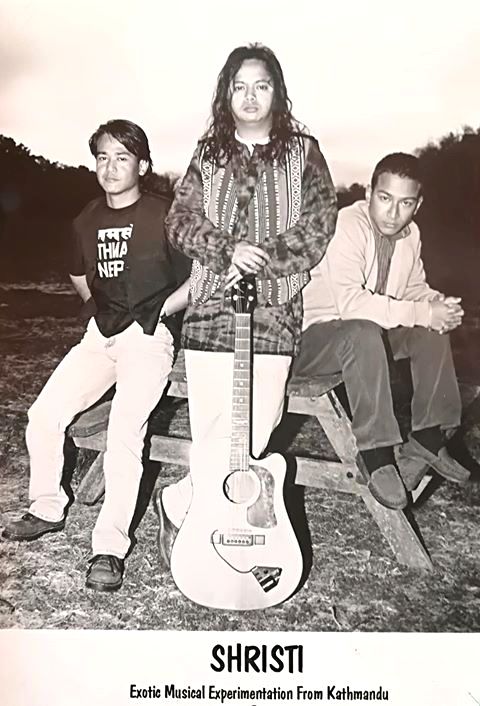 Shristi back in the day

Darjeeling was once the heart and soul of Nepali cultural revolution. Almost all the top writers, thinkers, poets, singers, musicians, film makers, artists in the Nepali speaking world came from here, were educated here, or were based in Darjeeling. Sadly this immense contribution of Darjeeling towards Nepali culture had gone unacknowledged. But all that changed when Shristi a band from Kathmandu composed this amazing fusion piece “Darjeeling,” as a tribute to all the senior artists from here who basically shaped the landscape of modern contemporary Nepali music

Shristi was a fusion-trio from Kathmandu, formed around mid 90s, with three talented musicians: Parangat Moktan on Tabalas, Sanjay Shrestha on Ethnic percussions, and Ashish Sinha on guitars. The band produced two instrumental albums and did two tours in the United States with a US based world music ensemble called the World Colors. Shristi also opened a show for Donavan of the 60’s fame, a US and UK billboard topper with songs such as Mellow Yellow and the Universal Soldier. Shristi is best remembered as bringing ‘fusion’ music to the mainstream audience in Nepal and was one of the first bands to cut a CD album in Nepal.

The three tightly knit Shristi members drew their influence from Western music, but their love for Nepali music was equally strong. Their passionate journey to exploring the roots of Nepali music led them to understanding the role played by earlier artists from the hills of Darjeeling in shaping the contemporary modern Nepali music. In their live shows, they would mention Darjeeling as the ‘Liverpool of Nepali music’, where the Sutra to modern and contemporary music came about.
This track called Darjeeling was their tribute to all the senior artists, whose contribution to shaping Nepali contemporary / modern music has been invaluable. Shristi played this piece live in their 1999 Kathmandu concert, and luckily it was preserved.
The band is no longer together, however, all 3 members keep in touch with each other. Shristi hopes to share their old instrumental exploits in future, for everyone to enjoy some good unadulterated music.