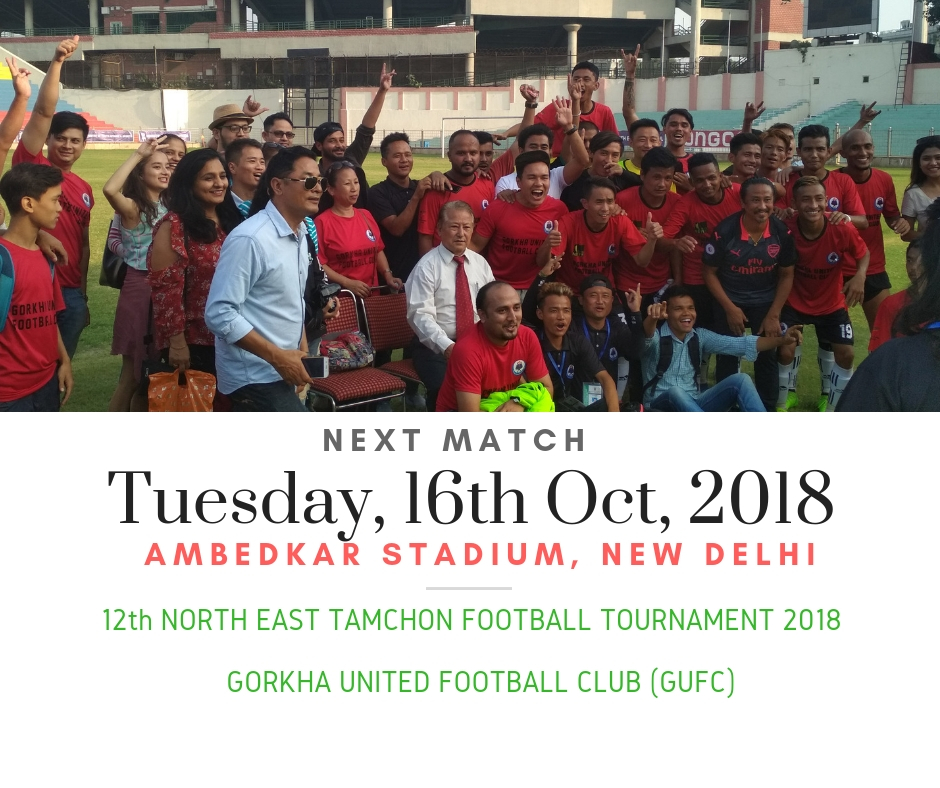 Gorkha United Football Club (GUFC) stormed into the knockout stage of the 12th North-East Tamchon Trophy with a 2-2 draw against Senapati FC in their final league match. In a keenly contested match held at Ambedkar Stadium in Delhi, GUFC led the charge in the second half with an early goal from Manish Thapa (No 19) but was equalized minutes later. Khem Chhetri (No. 8) scored the second goal for GUFC in the final minutes of the game only to be levelled 2-2 again by Senapati Red Star FC before the stoppage time.

Speaking after the match, GUFC team manager Amit Sharma says “our efforts have finally started to show some results. In the last four years, we have come a long way as a team playing in parks of Gurgaon and Delhi to participating this prestigious event. For us North-east people living in Delhi/NCR, Tamchon trophy is the biggest football extravaganza and we came here to watch the tournament every year. This year, we did not just come here to watch matches, but played and made a mark too. We couldn’t have been happier.”

GUFC began the tournament with a winning start against Zogene FC, followed by a painful 5-2 loss against HMAR FC. Supreet Raj, coach and mentor at GUFC says, “we had changed our game strategy a little in the second match which didn’t pay off. This time, we went back to our basics and played the regular 4-4-2 formation. I am quite amazed and proud of the boys to see how quickly they adapt and have come together as a compact team eager to make a mark in the tournament.”

SEE ALSO:  As the Offending Letter is Removed: We Thank Our Readers and Darjeeling Dist Admin
Powered by Inline Related Posts

GUFC will next play against the winner of Group D, either Kangleicha FC or SSSP. Both the teams have already qualified for the knockout stage and are strong contenders for the trophy.

Gorkha United Football Club is an initiative by Gorkha youth and friends from the north-east who live and work in Delhi/NCR. From what began as weekend recreational activities under GYASA, the founding members of GUFC have worked hard to sustained their interest in football and continue to build a platform for young players to join the team. From its early days playing in the parks after sunday meetings to reaching this new heights of achievements,  GUFC is today a family for the players from Manipur, Darjeeling, Siliguri, Sikkim, Nagaland, from both Gorkhas and other north-eastern communities. The players of GUFC, most of whom work and struggle in the city, stand for each both on and off the playing fields.

Unbound Futures, an NGO run by veteran Social Worker Col. Sukul Pradhan and his daughter Roshni Pradhan are ardent supporters of the GUFC initiative. As Col Pradhan says “the idea behind GUFC is not just playing a tournament, but for the younger generation to come together as a team and be a positive impact to one another.”

BJP Election Manifesto – A Thunderbolt for Opposition in Darjeeling Hills?