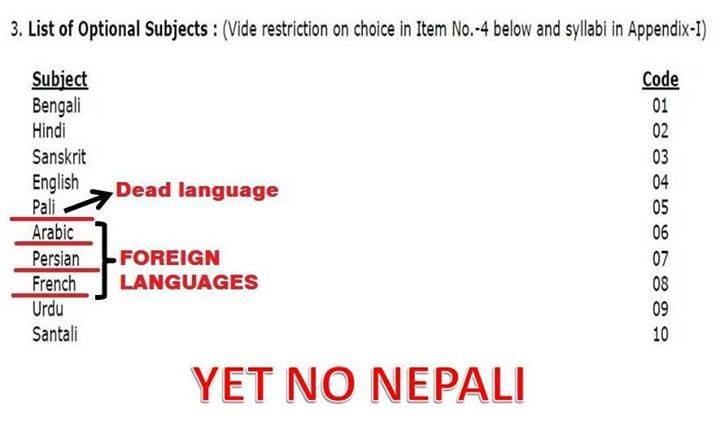 Pali is a dead language, Arabic, Persian and French are foreign languages - yet NEPALI one of the 22 National Languages of India under VIIIth Schedule of the Constitution, it is not included in WBCS mains


Despite numerous requests, protests and representations by the Nepali speaking people, TMC led West Bengal government has once again excluded Nepali as an Optional Paper in WBCS Mains exams.

This shows absolute lack of empathy by TMC Govt towards over 25 Lakh Gorkhas who live in West Bengal and whose lingua franca is Nepali. The discrimination against Gorkhas is apparent for everyone to see. This absolute indifference on the part of West Bengal government exposes their intent and discriminatory policy towards the Gorkhas, and thus justifies the demand for a separate state of Gorkhaland.

Insanity is often described as “doing the same thing over and over, and expecting different results,” going by this definition people in Darjeeling are certifiably insane, not all, but those who side with Bengal and hope time and again that Bengal will treat them differently.

Here is the news flash – they won’t.

For the past five years we have been highlighting the fact that despite Nepali being one of the National Languages of India, in West Bengal, Nepali was not placed as an optional paper for West Bengal Civil Services.

Thanks to our readers, there was enough outrage, leading the Darjeeling MP Mr. SS Ahluwalai had raised this issue in the Parliament

The then Kurseong MLA Dr. Rohit Sharma to take up the case of including Nepali as an optional paper in WBCS, and he tried his best, we have it on record that he raised the issue in the Bengal legislature, he raised the issue with Bengal Chief Minister Mamata Banerjee, with the Education Minister of Bengal and also with the Chief Secretary and the Education Secretary of Bengal. All of these people assured and reassured Dr. Sharma and through him the Nepali speaking people that in 2016 Nepali will be included as an optional paper.

However this year again, TMC Government has conveniently left out Nepali from the list of optional papers that people can appear for

In Darjeeling hills, Dooars and Terai each year thousands of students take up Nepali as an Honours or Elective subject, which means they specialize in Nepali. So when students are not allowed to pick up Nepali as an optional subject in WBCS, all these students are discriminated against, all these students are not allowed to be examined in the subject that is their strongest suit. Given which, the students do not stand a chance to compete to the best of their abilities, and these will forever continue to remain marginalized and treated as 2nd class.

The WBCS Main Examination consists of five Compulsory papers and one optional subject – which the candidates have to choose from the list of given Optional Subjects.

For the optional subject of their choice the candidates have to write two papers of 200 marks each.

This is where the students whose subject of specialization in Nepali are discriminated against.

Say if someone took Nepali (Honours) or Nepali Elective in undergraduate or Masters level, and wanted to write IAS or WBCS, his/her natural choice of Optional Subject could obviously be Nepali.

While in IAS examination Nepali is included as an optional subject, but in WBCS you cannot select Nepali as an Optional paper.

Whereas, students who have studied English, Bengali, Hindi, Sanskrit, Urdu and Santhali – languages which are used in West Bengal, and even those who study Pali – which is declared as a dead language, or foreign languages such as Arabic, Persian, French have to face no such discrimination, and they can choose any of these languages as an Optional paper.

Sadly, the current format of WBCS leaves the Nepali speaking population of the Darjeeling hill region, Terai, Dooars and rest of West Bengal at a disadvantage.

In Bengal, Gorkhas are ethnically the largest minorities, and by not including Nepali while including a dead language – Pali and three foreign languages Arabic, Persian and French which only a handful of students may learn each year, the Bengal government has shown that it treats us, and will continue to treat us as 2nd or 3rd class citizens.

For this reason, it is the DUTY of every Nepali speaking Indian, as well as equality and justice loving Indians to protest against this blatant act of discrimination on the part of West Bengal.

Language is what defines us, and gives us an identity, which is why our elders fought to get Nepali included as one of the national languages of India. However, despite the fact that Nepali has been recognized under the VIIIth scheduled of our Constitution since 1992, our language is still treated as 2nd class in Bengal.

This translates to the fact that WE – the Nepali speaking have been, are, and will continue to remain a 2nd class citizen in Bengal.

Coming back to the point on insanity, I have a question for those siding with Trinmool congress, and also for those hill politicians who seem to be best friends with TMC regime, and those who are supporting TMC due to Development boards. Don’t you guys feel even a little ashamed or sad to see our community being discriminated against this way? Do you guys seriously think and feel that Bengal will treat you all with respect and as an equal? Don’t you think you guys should speak out against such forms of discrimination with one voice?

To those who have even a little self-respect left in them, it is high time you all spoke out against this blatant act of discrimination. For the past five years all of you people remained quiet, including not even a peep from the students, college and school teachers, thinkers, writers, social workers, lawyers. We hope that this year, all of you won’t remain quiet, and protest against WE – the Gorkhalis being treated as a 2nd class citizens.

Some of you may question “if we want Gorkhaland, then why should we care about WBCS?”

We should care because, as long as Bengal refuses to allow Gorkhaland to be formed, it is their duty to treat us as equal citizens, and by repeatedly undermining our language they have time and again proven that for them we will always remain “Ora – the others.”

This incident is clear, very clear indication of why we not just want, but NEED Gorkhaland statehood.