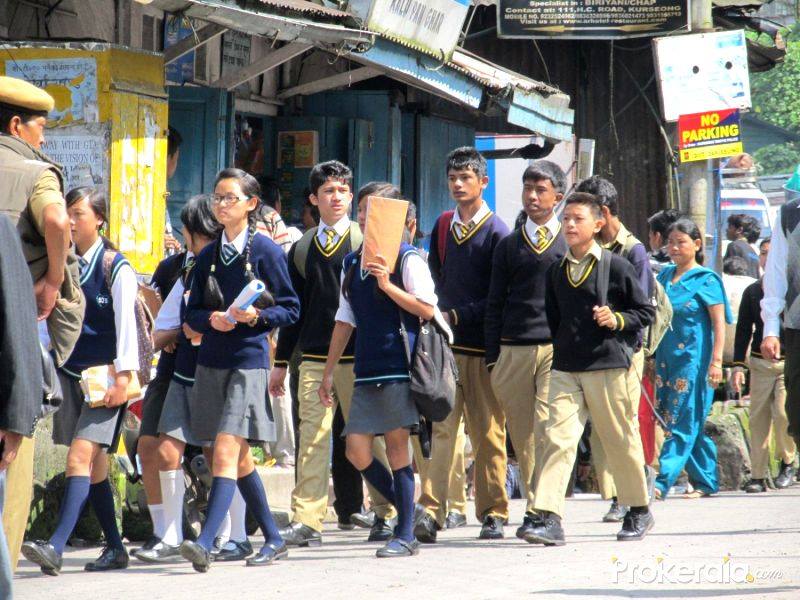 Recently, during my stay in the plains, I would go around for a walk in the morning after waking up. What I would see were students waiting for their school bus on the side of the road, with a certain gloomy texture on their faces (obviously, my mornings would start late enough). It reminded me of the hills.

Having a nursery school just above my home, I witnessed a completely different scene here. The parents (usually moms), in their best appearance, come to reach their kids to school – holding their little hands and revising the lessons for class. The eyes of the kids start shining as they start meeting their friends and start approaching the school. The kids enter the school with a smile and the parents still stay back outside the school having their share of guff-stuff with the fellow parents. In fact, many of them make good friends in the process. The most amazing view is to see the kids walking “puldung puldung” carrying a bag of their size and a water bottle strapped around their neck – “naani parney LKG, jhola bokney 10 kg”.

The same kids return home with their parents’ afterschool with wai-wai, chocolates or tittaura in their hands, trying hard to frame their expressions in the short sentences of broken English. One could spend his whole day listening to a conversation between two classmates, embedded with lines like-“oi, tomorrow come fast okay” to “she kotharing (to scratch) on your face no?”

Takes me back to the days when I was at school.

Studying in Darjeeling has been one of the best experiences of life for me and it must be the same with everyone. From having the best of the teachers to the best of friends, your student life enriches you with all the best and funny moments, which you can only miss throughout your life.

You know you have studied in Darjeeling if you have treated yourself will the enthralling delicacies, that were mostly limited to the “bari ko dokans” outside the schools or certain selective shops.

Aludum, in its place, ranks the top spot in the list of all the delicacies. Every school has shops around it that would definitely sell aludum or some innovative derivates of aludum – like aalu mimi, aalu momo, aalu mama, aalu matar, and the list goes on. T momo, taipho, aalu thukpa, oranges sliced to half with spices sprinkled on them, slices of cucumber with acchar, tittaura (usually for girls), Pepsi (ice cream of school times), sukkha matar (“class ma alchi laagda ko timepass”), beth gera, aaru cha etc were the things that school life enriched us with besides aaludum. We indeed used to take lunch from home that we finished within the first break itself.

How many of you haven’t made tattoos on hands with pen during school? There are so many things I remember vividly about schooldays. A school day itself would start with walking to school with your friends, meanwhile seeing students of other schools along the way. This little journey has in fact seen a lot of love stories, and even more “man manai love, man manai breakup” stories.

Every class would have monitors who would write the “talking names” on the board, where a few people’s name would proudly stand on the top every time; it would be me for my class, most of the times. Off periods would be the best part of the day, while break times would see serious games of chungi. Fights would often come up in class, which would end with phrases like “tero afterschool/after exams huncha”. I guess everyone has tried to bunk assemblies just for the heck of it, or bunk a class or two even.

Rainy season would see umbrellas piled up in the corner of the class and it would sometimes be a blessed feeling to sit through the entire day wearing wet socks. Forgetting an umbrella in that case was a usual affair. Coming to school or returning home during rainy season would be a strategic affair, putting every effort not to get wet. And sometimes you would have to use all your management skills to fit under an umbrella with two extra friends. Cold season had in its part a different flavour. It would be heaven to go outside in the sun after hours of sitting in the cold classroom.

From shaking hands with dozens of people while entering the class to banging the desks and singing songs during breaks, everything had its own share of happiness. One of my sisters from Loreto had however asked me to mention “favours”. I don’t know what it actually means, but the girls from Loreto would know, and if you do please mention it in the comments section.

The exchange of “Happy Holidays” and “Happy Dasain” before holidays, with all the happiness in heart; enjoying the end of the exams with your friends – everything captured in our hearts permanently, knowing that we are never going to have those times again.

The smiles that started to light up towards the end of the class, that would be brightest on Fridays of course, have been the most sincere smiles I have ever known. We all used to have a piece of cloth with us that would always be lying under the desk and would be used “jutta talkawnu” after school, before going home. No matter how smart you look before going to school, it’s a well known universal fact of Darjeeling, that you feel kind of “jhattey” while returning home. At least, the day would end with a shining pair of shoes and “chittikai mileko kapal”.

SEE ALSO:  BJP got 75% of Postal Votes, TMC Only 11% in Darjeeling
Powered by Inline Related Posts

The whole school life story turns out to be a beautiful ode. Time has its monopoly over us and we fail to build a bridge over two different time periods; we can just manifest the memories – memories of hitting each other with chalks; memories of walking with two friends under a single umbrella; memories of cracking jokes with the teachers. The fragments of memories are held closely together to form a beautiful piece of happiness. The years of schooling at the most beautiful place of the world dissolves smoothly in your life to give it a beautiful colour.