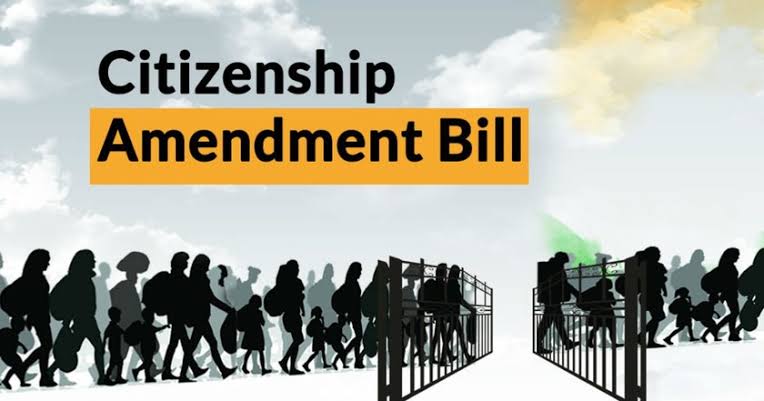 
“A landmark day for India and our nation’s ethos of compassion and brotherhood! Glad that the CAB 2019 has been passed in the Rajya Sabha. Gratitude to all the MPs who voted in favour of the Bill” tweeted PM Modi after the citizenship Amendment Bill successfully sailed through the Rajya sabha.

A country already divided along multiple fault lines will further disintegrate and fall if the government of the day uses Religion as an instrument of its state policy. It’s an irony that one of the founders of BJP, Shree Atal Bihari Bajyapee had once remarked, ” If India is not secular than India is not India at all”

Despite being a minority In the Upper House, the saffron party has somehow managed to get the controversial Citizenship ( Amendment ) Bill 2019 passed in both the houses of the parliament. The Bill which had stirred up the Hornet’s nest-like its predecessor CAB 1.0 ( Citizenship Amendment Bill 2016) still has a sharply divided discourse in the country.

Although the Bill has passed its first snag in the parliament, it is yet to face its archnemesis viz the Supreme court.

I am not here to discuss the politics of the Bill, that’s best left to the politicians. My interest lies in its Constitutionality. Will the Apex Court find any merit in the Bill Or will the court strike it down on grounds of being unconstitutional, only time will tell.

In my attempt to get at least a part of the question answered we need to take a deeper look into the Facts of the case, landmark constitutional judgements pronounced by the Supreme Court and finally the grounds on which the Bill can be challenged.

Although CAB 2.0 violates a plethora of Articles including Article 15( Right against Discrimination) Article 19 ( Right to freedom), Article 21 ( Right to life and personal liberty) and Article 25 ( Right to freedom of Religion) we are primarily concerned here with Article 14 which seems to have become the bone of contention among the legal luminaries.

Article 14 guarantees Equality before Law and Equal Protection of Law to “Any Persons” irrespective of Religion, Race, Caste, Sex or Place of birth.

It should be noted that Article 14 ( Equality before law) is a Fundamental Right enshrined in Part 3 of our constitution, and by virtue of this its violation can be challenged directly in the Supreme court bypassing the regular hierarchy of courts ( Article 32 – Right to Constitutional Remedies )

It is also a well-settled fact in law that Article14 applies to ” Any Persons ” both citizens and non-citizens. Non Citizens here includes immigrants as well. Article 14 therefore, protects not just the Indian citizens but also all those legal immigrants that come to India from a foreign territory with valid travel documents.

The Bill is said to violate Article 14 because it discriminates immigrants based on religion. The Bill allows immigrants belonging to 6 religions, from 3 different countries ( Pakistan, Afganistan and Bangladesh), to immigrate into India and acquire Indian citizenship through Naturalization. It also relaxes the norms for acquiring citizenship through Naturalization to this migrants by reducing the period of continuous stay from11 years to 5 years.

A closer look at CAB 2.0 reveals that it suffers from some serious constitutional infirmities at multiple levels.

(1) Article 14 reads ” The state shall not deny to any person equality before the law” meaning that everyone is equal in the eyes of law, it, however, on some exceptional circumstances permits Classification of objects, provided such Classification is Reasonable and not Arbitrary ( Article 14- Equal protection of the law ).

Therefore the classification done in the Citizenship Amendment Bill 2019, between persons of different communities based on religion is Arbitrary because it allows immigrants only from Bangladesh, Afganistan and Pakistan to be eligible for Indian citizenship through Naturalization and gives no rational explanation whatsoever for excluding migrants from Bhutan, Srilanka, Myanmar and the likes where religious minorities are equally prosecuted.

There is no rationale why these three countries were chosen in the first place. The reason given by the government that these 3 countries have a State Religion and that religious minorities living there face prosecution and therefore should be protected does not hold ground because we have 2 neighbours namely Sri Lanka and Bhutan which also have Buddhism as their State Religion, where religious minorities are equally prosecuted but the Bill makes no mention of these 2 countries.

Here we are classifying Refugees based on religion and the Object of the Bill is to “save religious minorities facing prosecution in their respective countries”. If that is the Object of the Bill then “ALL Refugees” who are facing and fleeing religious persecution in their countries irrespective of their Religion should be made eligible for Indian Citizenship and not just a few selective religious minorities from few countries. This is exactly the type of classification which is not permitted in Article 14 because the classification is not only arbitrary but there exists no rational nexus between the basis of classification and the object of the law.

(3) Perhaps an even stronger ground on which the Supreme court is more likely to strike this Bill down is on grounds of violation of the ” Basic Structure Doctrine” The Doctrine of Basic Structure was evolved by the Supreme court in a 13 bench, Keshavnand Bharati case 1973. According to this Doctrine, the Parliament has the power to amend any part of the constitution, including the fundamental rights by passing a law, however, such a law should not damage the basic structure of the constitution.

This judicially innovated Doctrine of Basic Structure is therefore sacrosanct, infallible and cannot be abridged at any cost. Time and again the court has enlarged the ambit of this Doctrine by including many items in its list of Basic Structure.
In S.R. Bomai Vs the Union of India case 1994, the SC held “Secularism” to be a basic feature of our constitution.

Therefore if the legislature of the day enacts a law that dilutes the Secular character of the state or promotes any particular religion over others, then it would not be unconstitutional for the Supreme Court to strike it down and declare such law null and void on grounds that it damages the basic structure.

There have been many instances where the Honorable SC did not hesitate to strike down important laws solely on grounds that it destroys the basic structure. For example, the 99th Constitutional Amendment Act 2014 had provisions for establishing a National Judicial Appointment Commission ( NJAC) that was responsible for the appointment of judges to the higher judiciary. In a collective order, on 16 October 2015 the Supreme Court by a majority of 4:1 struck down the NJAC Act, 2014 meant to replace the two-decade-old collegium system of judges appointing judges in the higher judiciary on grounds that “independence of Judiciary” is a Basic Feature of the constitution.

It is clear that CAB 2.0 blatantly discriminates persons on grounds of religion. Such an act of the State, discriminating one religious community over another without any reasonable explanation as to why such classification was made goes against the fundamental tenants of Secularism according to which a State has to be “Religion Blind”. The state should only regulate relations between Man and Man and not between Man and God. This is very the essence of a Secular State.

Secularism is the heart and soul of Democracy, it is not just a part of the basic feature but also an integral part of our Preamble which reflects the philosophy of our constitution, a set of ideals the framers of our constitution dreamed for us. By enacting this flawed Citizenship Amendment Bill the Government has not only tried to subvert democratic ideals and dent the secular fabric of our nation but also committed a fraud on the constitution.