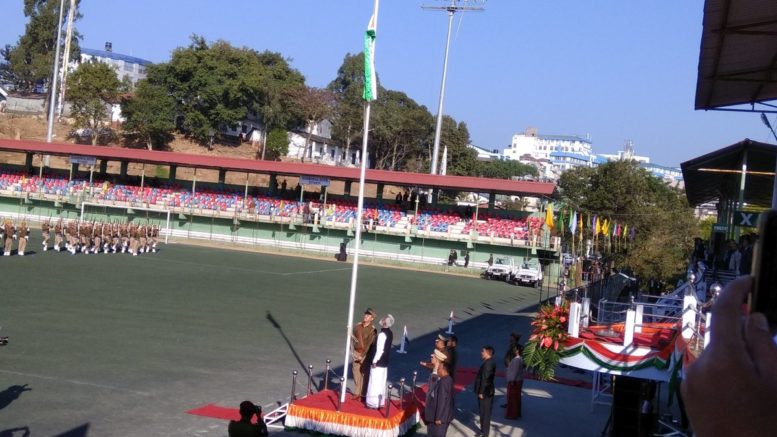 
Mizoram Governor Kummanam Rajasekharan on Saturday addressed Republic Day functions at the Assam Rifles ground, where no civilian and lower rank officials were present in view of the boycott called by an apex NGO body to protest against the Citizenship (Amendment) Bill 2016.

The 70th Republic Day celebrations across Mizoram were at low key as the NGO Coordination Committee (NCC) organised demonstrations across the state in protest against the Citizenship Bill.

Only Chief Minister Zoramthanga, some of his cabinet colleagues, a few legislators and top officials were present in the main functions of the Republic Day at the Assam Rifles ground.

According to the police, in other district headquarters, the Deputy Commissioners hoisted the national flags, but there were no officials and people in these events.

The police said placard-carrying protesters demonstrated near the venues where official Republic Day functions were organized.

Despite the Chief Minister and Home Minister Lalchamliana’s repeated requests, the NCC on late Friday reiterated its previous announcement that it would boycott the Republic Day celebrations “to protest the passing of the Bill in the Lok Sabha”.

NCC activists demonstrated near the Assam Rifles ground in the state capital where the Governor unfurled the national flag and addressed a very small gathering.

“In response to the boycott call, the members of the public did not participate in any Republic Day event in the state. However, there were no reports of any untoward incident,” a police officer said on the condition of anonymity.

Earlier, Chief Minister Zoramthanga threatened to sever ties with the North East Democratic Alliance (NEDA) if the Centre does not withdraw the Bill that seeks to grant citizenship to migrants from six non-Muslim minority groups from Bangladesh, Pakistan and Afghanistan.

The ruling Mizo National Front party is a constituent of the BJP-led NEDA.

The Mizoram Governor in his address said stringent measures will be in place to protect the state’s borders and execute the Mizoram Village Level Citizen Registration.

Rajasekharan said the government would endeavour to maintain the unity and brotherhood among all Mizo people living within India and across the world.

“All out efforts would be made for combating the drug menace and alcoholism with support from civil society. Necessary measures would be taken to repeal The Mizoram Liquor (Control & Prohibition) Act, 2014.”

He said that improving road connectivity was a major challenge for the government. “The government is committed to leave no stone unturned to improve the quality of internal roads and to ensure better road networks and connectivity with neighbouring states.”

He said that the government would continue to accord priority to develop infrastructure for the development of sports.