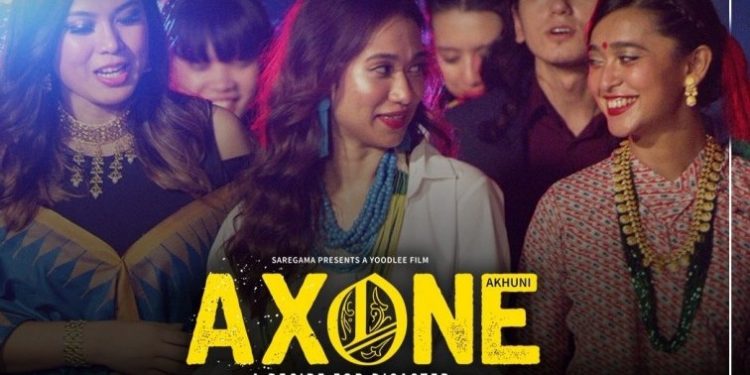 
At a time when the people of Northeast India are facing the brunt of anti-Chinese sentiments in the wake of the COVID19 pandemic, the movie Axone comes as a breath of fresh air. This satire on racism and stereotypes by Northeastern director, Nicholas Kharkongor premiered on Netflix on the 12th of June 2020 and it generated quite a buzz! On the morning of the 12th June, my Instagram story feed flooded with posters of the movie, comments on the aptness of the movie at this point of time and snapshots of the racist comments from the movie – unfortunately ones, we as an ethnic minority, are well acquainted with. I will admit, I was equally excited for this premiere. My friends and I had been awaiting it since the beginning of the year. We even went as far as to coax our Naga friends to bring Axone for us.

Axone, (pronounced as Akhuni), is a widely used ingredient in the Naga cuisine which is known for its pungent odour. The story revolves around a dish which incorporates pork and Axone – two ingredients that resonate well with the Northeastern taste palate but not quite with the mainland Indian palate. With the use of subtle yet hard-hitting jibes on the cultural stereotypes in India, Axone packs a punch. The storyline is refreshing and the underlying theme and stories – perhaps, the best representation of Northeastern sentiments on the silver screen up till date.

However, for me, as an Indian Nepali speaking person who has lived in a mainland Indian city, the movie hits all the right notes bar one. The unimpressive portrayal of the Nepali protagonist, Upasna Rai by the Bengali actress, Sayani Gupta falls short of the expectations from the movie. Her acting does not come across as authentic, which is noteworthy given that the actress herself in an interview mentioned that “Authenticity is most important”. Rather, the act merely turns out to be disrespectful of the culture and language of the Nepali community.

First, her enunciation (which I understand from interviews and articles, took a lot of time and practice to [un]master?) is quite uncharacteristic of the actual Nepali enunciation heard among the Indian Gorkha population as well as the Nepalese population. The accent in her speech sounds unconvincing and the use of conjunctions and articles (or the lack thereof) appears like subtle mockery to the colloquial language spoken by the Nepalese youth residing in the cities of India. Certain words like “amboo” and “ahtha”, characteristically Nepali and a few other slangs (which I learn, the actress picked up while on a shoot in Nepal) are used incessantly and sometimes, unnecessarily. Instead of emphasizing the richness of the language, it ends up diluting the actual essence of the dialogue.

The Nepali language, with its variations based on geographical locations, is a rich language abounding in conjunctions, adjectives, and onomatopoeias. The majority of Nepali youth in the cities of India, contrary to popular belief, speak fluent English, Nepali, Hindi as well as the other regional languages. The few who are not well-versed in languages beyond their mother-tongue still do not speak without articles and conjunctions. And they definitely do not add a ‘la’ to the end of their every sentence. We do not speak that way. Period.

Second, the movie constantly emphasizes the fact that there are instances of racism within the Northeastern community. Nepalis who are not Northeastern geographically but relate to them culturally are, as mentioned multiple times in the movie, treated as “outsiders”. In spite of being aware of this alienation, they have chosen to cast a non-Northeastern and non-Nepali (a Bengali, might I add, to that end) actress in the role of the protagonist. Although the protagonist is aware of the division between the rest of the group and herself, you don’t see the issue being further addressed beyond mentioning it (which you might argue is a decision that is warranted by the freedom of the media; I don’t counter-argue).

However, by their casting decision, they seem to be convincing themselves, more than the audience that Nepalis – and actors portraying them, in spite of their non-Northeastern racial features are not outsiders, but rather Northeastern?

The choice of casting a Bengali actress in the role of a Nepali girl tugs at more heartstrings than one. The demand for statehood by the Indian Gorkha people and the subsequent denial of the same by the state of West Bengal has caused a certain level of estrangement of the sentiments of the people of Darjeeling in particular, and other Gorkha people, in general from the Bengalis. Now, this is not a cue to engage in hate speech against the Bengalis. This does not mean that Nepali and Bengali people are at loggerheads with each other. This does not mean that as Nepalis, we dislike Bengalis. We don’t; I have Bengali friends whom I completely adore and so do other Nepali people I know. While these two races continue to inter-mingle, there is no doubt, there is an underlying suppressed sentiment that has arisen from years of being treated as second class citizens in a state we call home. The casting decision in Axone, where the cast members are predominately portrayed by Northeastern people themselves, except for the role of the protagonist Nepali girl, steps on this already strained sentiment. Perhaps, a more informed decision would have been to cast a Northeastern – if not a Nepali – actress to represent Upasna Rai, as has been done with the rest of the cast.

Sayani, although shows a certain resemblance to the Nepalese race, has Aryan inclined facial features. In the Nepali community, these features are generally associated with the Newars and the Chhetri-Bahuns. The character is named Upasna Rai. Now, Rai is a Nepali title that is generally associated with more Mongoloid features (Not that there aren’t exceptions. There are some in my family, itself). Moreover, the saree draped by the protagonist in the final scene is a Newari saree that is the cultural dress of the Newars originating from the Kathmandu valley. Nevertheless, this particular styling decision is not entirely important to the movie. It is merely another point I noted as it involved my ethnic group. A Rai could dress in a Newari saree, for that matter.

SEE ALSO:  Ask Me How I Feel About Inner Line Permit
Powered by Inline Related Posts

The movie Axone raises pertinent issues at a critical time. It has opened up a forum for dialogue on the racism faced by the Northeastern community. The movie is the voice of countless Northeastern people speaking for the first time on the silver screen. While it speaks the voices of the Northeast, it serves as an eye-opener for the mainland Indian community. It is perhaps, the only movie in Indian mainstream cinema that tackles racism, at the same time has a Nepali character as its strong female lead. My only criticism of an otherwise much-needed piece of art is the poor representation of the Nepali community. To a non-Nepali person, the nuances of the character’s speech may pass by as genuine colloquial Nepali. However, it is not the accurate representation of our accent and language. The cast and crew may have put in the effort to come up with the result they achieved but it comes off as sloppy and phoney on the screen. Now, we don’t want the rest of the world to be of the belief that Nepali people all speak in sing-along voices, missing out articles and replacing them with a ‘la’, do we? I just wish, a more informed casting decision had been taken or a better linguistic representation made.

Kanchan and Novelty Cinema Halls of Kalimpong – A Fading Snapshot

Of Cinema, My Grandmother and Me

2 Comments on "Representation of the Nepali Language on Axone: Unauthentic and Disrespectful?"