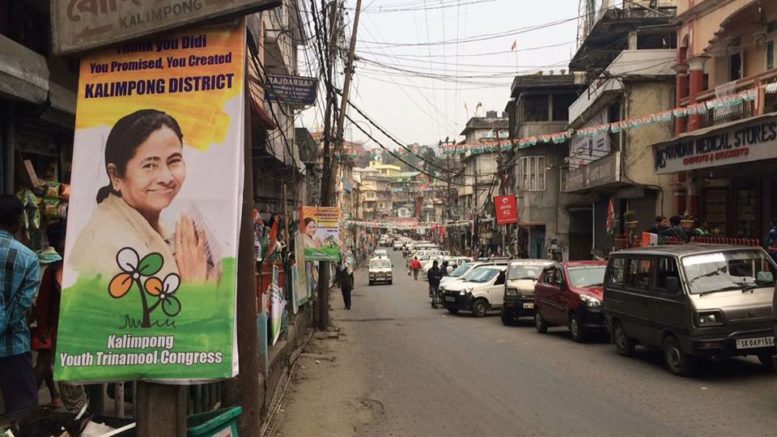 Andhyaaro Kalimpong - my town, where I am a stranger


It was early afternoon and the sky was confused whether it was winter, summer or the monsoons. I strolled up and down Kalimpong’s Main Road three times and an unfamiliar feeling that I managed to recognize at once struck me heavily, bluntly; it stabbed me and it chocked me. It was this town that was my home and I knew this town, but I did not know this town, anymore.

There is a distinct contrast between the town that I used to know and the town that breathes before me today. It is a rather dull statement to make owing to the fact that the two towns being spoken of are separated by over two decades. Yes. New constructions have erupted and architectural liberties are being experienced and capitalism has crept in to our homes and four-wheelers and two-wheelers are breeding at an incessant rate and technology has swept us over just as it has the rest of the world. But this is solely the disparity that the eye can see and the dissimilarity that I write about is one that cannot be seen; only felt, growing within you like a benign cancer.

The air no longer holds in itself the fragrances of orchids and marigolds and azaleas and the murmuring bamboo trees that once would twitch in delirious orgasms through night and day seem to have surrendered the vibrancy of their youth today. The old mountains to the new day are no more than just that – old mountains. The story-telling rivers and the singing brooks and streams have narrated their last chapters and have sung their last melodies and now bow their heads in silence. The lustrous pine trees adorning the slants of the hills have lost their telepathic abilities. And the people – men, women, teenagers, children – have traversed so far away from their basic nature that it would become an arduous task if one were to tell man from machine. There is a certain chaos that dwells in the atmosphere of the town that we see today. You hear the sounds – the clamour, the noise, the rhythm of regularity – and you perceive it well and you turn your eyes in their sockets and you identify the frenzy that unfurls around you for time has trained you well.

You breathe in the air. A concoction of colours enters you and along with it, you inhale the remains of that old town. Something flares up inside you. Memories are burning; memories of a town that is not this, memories of a life that is not this. And you realize the bittersweet travesty that is ‘time’.

The Gorkhaland Revolution was born in this town in 1986 and two years later, I.

SEE ALSO:  EXAMS - At the end of it all, you remain who you are
Powered by Inline Related Posts

The gamut of changes that we have both witnessed since then has been immeasurable. The Main Road has grown in size, transformed its shape numerous times and painted itself over and over again.

A once significant landmark of the town, The Arts And Crafts Centre, has been relocated and made way for a building that houses a plethora of shops retailing modern day amenities and commodities, amongst many others that have suffered a similar fate. Civilization has touched the far ends and electricity has arrived at the far reaches of the sub-division, now district. Change is the only constant and these three decades have seen it’s fair share of dawn and dusk, and The Revolution.

The Gorkhaland Revolution has been the one thing that has managed to remain unchanged. It has remained young but grown old; it continues to live but has long been dead. The Revolution is a movement; is stagnant.

The revered Indra Bahadur Rai, the first recipient of the Sahitya Akademi Award in Nepali, wrote in one of his earliest stories Ujyalo – “Everything the light settles upon becomes lost inside itself somehow”.

Author: Wangchuk Bhutia. He can be reached at: w.bhutia@hotmail.com