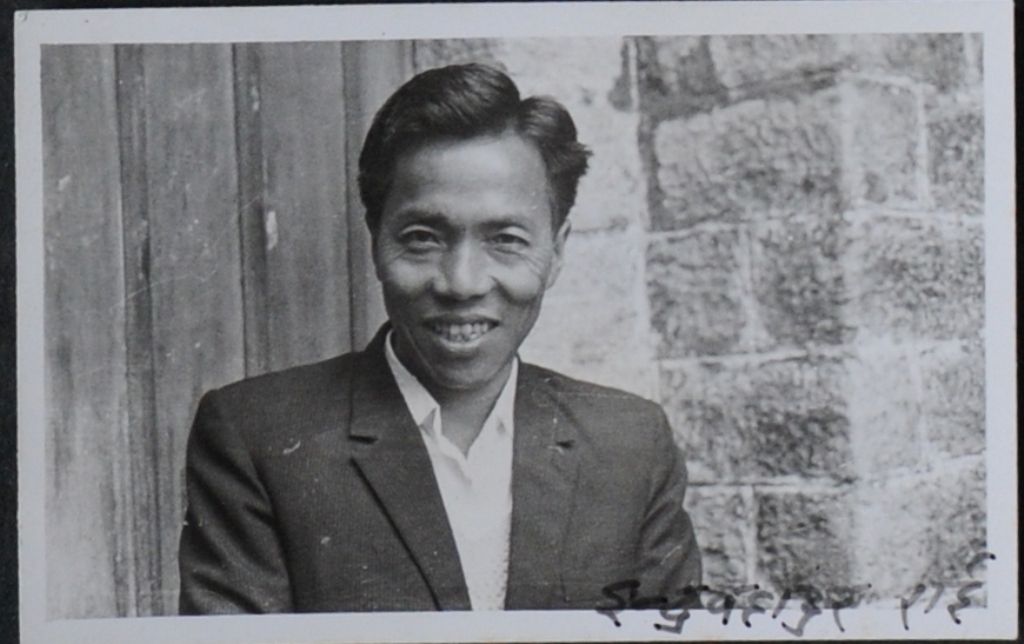 In 1967, Nepali speaking Indians were struggling to get our language incorporated as one of the national languages of India. It was also a period when the Nepali language and literature was going through a period of renaissance – owing to the “Tesro Aayam” literary movement. At the heart of it all was venerable Indra Bahadur Rai sir. Thanks to The Record Nepal, we are able to share with you all, this rare interview of Dr. IB Rai by Late. Uttam Kunwar ji.

“Every person has a universe inside them but they can achieve wholeness only within a national, generational context” – A 1967 interview with the late Indra Bahadur Rai

“I fell from a tree, father said. And he found a younger brother in a river. Another one was given by a jogi (hermit)and as for a younger sister, mother snatched her from a monkey’s arm. When we were little, we got sad after listening to these accounts of our arrival. But we were also stunned by these incredible stories. Every day, numerous babies entered the world, as if coincidentally, creating their own stories. It is presumptuous to say that nothing happens without a story; but to say that nothing happens without a reason is universal truth…

…Before birth, I floated in the sun’s golden rays, I swam in the mighty wind and I waded high above the atmosphere. I could have moved towards the stars; like a wish released, I could have reached anywhere. But I realized that the human form — the experience of sympathy and sorrow — affords the most satisfying and courageous test. So I fell through the flimsy clouds of a winter  sky, took the form of a child and spent the night within the folds of a tall Toona tree. And as I mentioned before, I fell from the tree the following morning, the tree that stood on a dry wintry patch.”

Seven years ago, Shree Indra Bahadur Rai expressed these sentiments in a piece titled ‘My Birth.’ And while responding to a question I posed at present, Shree Rai said, “The month of my birth is clear, but the year is still uncertain. I was born on  a river shore; these days, there’s a concrete bridge at the spot. My parents went there once; the year of my birth is written on that bridge. But I still haven’t managed to visit that river or the bridge.”

Extracts from Rai-ji’s written and spoken words presented above exemplify his graceful way with language and literature. But he does not like to talk a lot; the gravity and sharpness in his eyes indicate that much. His answers are succinct . It is not surprising that in his daily life, as the Vice President of the Darjeeling Metropolitan Office representing the regional wing of the Indian Congress and a respected member of the intellectual crowd, he is extremely busy. On top of all this, ‘I B Daju’ is also known as the leader of the Tesro Aayam literary movement. To get an idea of his influence on the intellectual crowd in Darjeeling, consider this– if fifty words are uttered, fifteen are devoted to ‘I B Daju.’ ‘I B Daju said this,’ ‘I B Daju wants us to do that!’ According to them, I B Daju’s ideas break barriers. Once, somebody even said this to Ishwar Ballav in Jhapa, “What kind of impact has I B Daju had on all of you?” The response was not noteworthy, but it was the  kind of question that could not be answered properly because I B Daju’s strong influence in Darjeeling is unparalleled.

My Jhapa meeting with Rai-ji was probably our third. In Kathmandu, I had greeted him with a rushed Namaste. The second time was in Darjeeling; I went out of courtesy and also to request him to write for Ruprekha. But I had been familiar with his work for much longer. And in between the hectic sessions of this second National Literature Seminar, I requested him to express some thoughts and provide some information about himself. There was no time for a long, leisurely conversation but we managed to set things up in such a way that this interview became possible.

When I asked, “Why did you enter the field of literature?” He responded, “I took this step with a big intention of writing a novel. But sometimes entering a certain field is easier than the effort required to sustain the engagement. These days, I am afraid of the ensuing responsibility.” It was as if his answer was a symbolic response to another question, “What is your first literary work?”

He continued, “The first time I wrote a novel was in the seventh grade. That novel found only one reader. He took the manuscript but did not return it. ‘Let me take it and then I will tell you,’ he said. Perhaps he never read it. Otherwise he would have returned it.”

After listening to this anecdote, I asked, “Now that you are here, what kind of important contributions do you think you have made to the development of Nepali literature? I want to hear this straight from the horse’s mouth.”

“Uttam-ji, you should not ask questions regarding importance casually to anyone anywhere. If we can wait for many more years, we can revisit the necessity and usefulness of this question.”

“Do we also need to wait to discuss the future of Nepali literature?”

“No. Considering certain possibilities, I feel that the immediate future of Nepali literature is quite encouraging.”

We were inside a large room of a large building that resembled a dormitory of a barrack because it was full of beds. During our conversation, a few representatives and passerbys kept coming in as if to interrupt us, but our conversation did not get interrupted; it kept flowing.

“Could you please talk about the contemporary aspect of Nepali literature?’

“This topic is too vast, Uttam-ji. If you do not ask about a specific aspect of the contemporary scene, my answer will turn into an essay. Literature everywhere has a contemporary aspect; that’s for sure. But it won’t be sufficient to just say that.

New ideas are emerging in science, philosophy and criticism; but it is not enough to merely ramble in print. Writers ought to infuse their work with these ideas. In fact, even that is not enough; these ideas should take literary forms and touch people’s lives. Which contemporary story or novel has managed to do this?”

“Is Tesro Aayam the ultimate peak of modernity?” All this was an excuse to tap into the realm of Tesro Aayam.

“Not for everyone. Modernity is a base on which anyone can construct their own peak.”

I wasn’t satisfied with this. So I asked, “Actually, what exactly is Tesro Aayam?”

With a slight facial movement, Rai-ji proceeded, “When it comes to literary writing, Tesro Aayam is another name for depth.

Every kind of deep work has a third dimension. But writing can also have a fourth dimension. One ought to strive for that.

To be honest, anyone can explore and invent their own new technique. Multidimensional writing can be accomplished through numerous techniques; the diversity is important, worth studying, and worth reviewing so that it can be further developed.”

He has also elaborated on these ideas in a piece titled “Aayamik Sampurnatama Anubhuti. “There are Truths in life, but I have focused more on the notion of true expressions. One ought to write about one’s sensations, but it has to be written in exactly the same way it was experienced. One ought to write out the raw emotions, not the resulting understanding. Above the surface of any experience, there is a conglomeration of several experiences — that’s the real understanding — and that ought to get transformed into sentences and written down. Not thought but experience as the basis of a new sentence; not conception but perception; not a display of understanding but communication being the ultimate goal. As if experiences were pieces of rock, naturally unique…”

“ All this also contributes to a more nuanced understanding of current, national phenomena. Apart from practicalities, it expands intellectualism. Every person has a universe inside them but they can achieve wholeness only within a national, generational context. A person can have numerous localized identities; sometimes all those identities find expression in a single incident. But a single identity– one that does not encompass others — is never complete…To not be limited to who one is today, but to discover wholeness in mankind’s entire journey.

Freudian psychology is not just about the unconscious and sex; a person’s past is alive in their present. Wholeness requires more than an understanding of current affairs. Specialized skills and independent thinking will not last — these are illusions.

After all, thoughts transform into sensations in the unconscious realm. And these sensations ought to get written down in the form of myths, images and ambiguities.”

Since we had been talking about Tesro Aayam for a while, I redirected my attention towards his personal literary preferences. When I inquired about his favorite writers, Rai-ji answered in a straightforward manner, “I accept my unnatural stance because it has been many years since I have read other people’s work as a reader; I only read as a writer. When one reads in this way, one derives new meaning, different from an earlier understanding. But due to habit, I sometimes revert back to my earlier understanding. In any case, I usually enjoy everyone’s work when I get down to it.”

Then I asked him about the purpose and usefulness of literature. His answer was well-crafted, “I feel that literature is useful for life. And life is worth worshipping.”

“It’s not my intention to say that literature that raises sociopolitical issues is more useful than the literature that does not. Since life is worshipful, any exercise that records and witnesses a life is worth it; it is worth providing the tools. But the exercises can be different.”

We both needed to attend a conference at the Seminar. And we had to eat before that. Since time was running out, we exited the room. While walking, I asked one final question, “You are quite involved in public service. How do you manage to free yourself from these tasks in order to write? Don’t you need to be in a certain mood – ?”

With a mild smile, he replied, “Analytical writing does not require a particular mood. I get creative, analytic ideas by being around people. I devote long afternoon hours to conversations, surrounded by people. But I like to be by myself in the mornings and evenings, analyzing everything.”

Indra Bahadur Rai passed away on March 6, 2018  in Darjeeling. He was 90 years old. This is a translation by Niranjan Kunwar of an article from Uttam Kunwar’s anthology of interviews, Srasta ra Sahitya (Authors and Literature), published by the Uttam Kunwar Memorial Award Fund. Two fresh translations of Rai’s work ,There’s a Carnival Today by Manjushree Thapa, and Long Night of Storm by Prawin Adhikari, were published by Speaking Tiger Books during the writer’s final year.

We are most grateful to The Record where this article was originally published, for giving us the kind permission to reproduce the same.

We request our readers to visit them at: https://www.recordnepal.com  They are doing a phenomenal job of recording, documenting and telling stories that are often ignored.

1 Comment on "MUST READ: A 1967 Interview With the Late Indra Bahadur Rai"