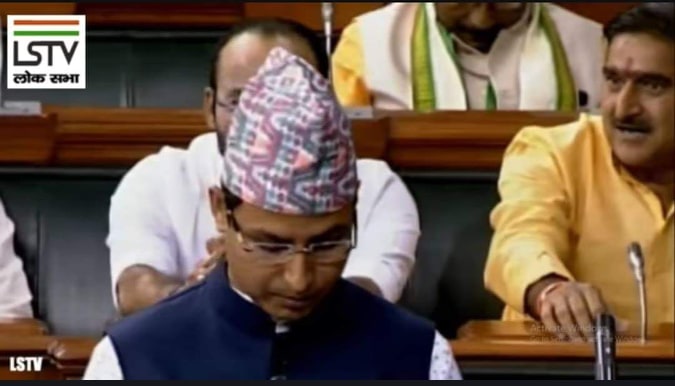 
Expectations were very high from Darjeeling MP Raju Bista for his maiden oath-taking ceremony. Especially after the video of Sikkim MP Indra Hang Subba taking his oath in Nepali went viral, very many people had started to question if Raju Bista had already taken his oath, and if he did, then in what language?

Once people realized that he hasn’t taken his oath, many were curious which language he would prefer to take his oath in.

Giving rest to all speculations, Darjeeling MP Raju Bista today entered the Parliament wearing his Dhaka-ko-Topi, and took his oath in Nepali.

What was special was him closing his oath with a “Jai Hind…Jai Gorkha”… which was responded to by his fellow colleagues, with the call of “Jai Gorkha.”

Many inside the Parliament must have been curious after his “Jai Gorkha” call, as someone can be heard asking, ‘kahan se hai…’ and someone else responding “Darjeeling.”

We are very happy and proud of our MP – who chose to honour our lingua franca – Nepali.

To those who are not familiar with Parliamentary proceedings, please note that the MPs have to fill in a form before the commencement of the session indicating which language they want to choose for their swearing-in. Oaths in Nepali by both Darjeeling and Sikkim MP were not a matter of fluke. They chose to honour our mother tongue, much before today, and for that, both of them will always have our eternal gratitude.

When asked about his decision to take the oath in Nepali, Bista said: “For every one of us, mother tongue is the first life skill we develop, understand, and learn. However, today there is very less attention given to native languages in terms of educational and career opportunities. I hope that in the coming days, there will be more opportunities made available to support and promote local languages.”

We wish both the MPs luck and hope that our MP Raju Bista will be able to persuade the powers that be in the government to fulfil our long pending demands.

You can watch Sikkim MP swearing in here