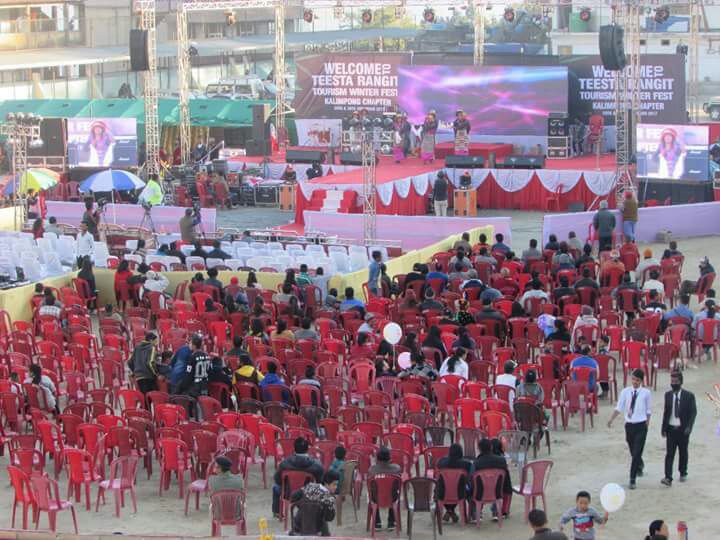 The West Bengal government appointed Gorkhaland Territorial Administration (GTA) Board of Administrators – is busy rallying ‘public support’ in their favour. The fact that they have used every possible tactic in the past few months – from buying support to using police to burn down homes of those loyal to the Gorkhaland cause, shows how dedicated they are to display their credibility and functionality to their employer – the ‘Compassionate’ one. The “Teesta Rangeet Tourism Festival 2017” is just another effort by these appointed administrators to send signals to Nabanna indicating their (i.e. BoA’s) hold in the Hills and us – hill dwellers, and through them Bengal’s hold on us.

The lure for power and money has so blinded the GTA 2 (as it is popularly referred to on social media) caretakers that they have deliberately and quite conveniently chosen to disregard, in fact forget, the cold blooded murder of 13 of our brothers and sisters a few months ago. With pending inquiries into these deaths, with no accountability for the lives that were taken (and for the lives that have been irreversibly damaged) by gun wielding officials, with the bereaved families who are yet to come out of their mourning, with justice for the dead and their surviving family still remaining a far cry, these Mamata appointed caretakers have made another utterly insensitive move like the one before – when “they” declared to call off the strike – that does not align with the ground realities of the Hills yet again.May be this phony obnoxious farce planned in all desperation, just to please the higher powers is all too visible and clearly understood by Mamata, that she decided not to grace the festival with her presence. But then again, how can anyone, who burned and ransacked our homes, caused fear and pain in our hearts and minds, led to the death of 13 people, jailed and tortured hundreds, imposed an embargo on food supplies from entering our region, fractured the community into piece along numerous lines such as ethnicity, caste, religion, etc, and gave a damn when the hills were burning by traveling to the Hague in the Netherlands to collect the “highest public service award” even dare to face us?

While we are still seeking justice and accountability for our sufferings, losses and pain, including seeking ways to move our demand for a separate statehood forward, these Mamata appointed caretakers are busy organizing a bloody (in the literal sense) Tourism Festivals.

Justice still eludes the hundreds who are languishing in jails outside Darjeeling, the harassed and tired families of the jailed victims trying for bail for their loved ones, but have not succeeded because of their refusal to give their allegiance to the Mamata appointed administrators. Many are believed to have surrendered to these administrators just to relieve themselves and their families from inconveniences that they were put through. Job transfers to far away, undesirable, difficult places are common these days in the hills, particularly for those supporting and vocal about Gorkhaland statehood demand. Violent crackdown on homes of innocent people are far from over, to the extent that today the State apparatus have started preying on young school going children (some as young as class 5 students) to intimidate their family members who are deemed to be a threat to the current Mamata appointed illegal BoA. Conversion by force or free will of elected representatives from Bimal Gurung faction into joining the dummy group is rampant and almost complete now.

But what really needs pondering over by everyone is this simple fact, for how long can Bengal or their appointed stooges hold an entire race of people subjugated by such blatant display of power and subversion of justice?

The passion and belief with which our people had struggled for Gorkhaland this time too, as always, was met with brutal suppression and alas defeat, but this time the defeat was depressingly more humiliating because it was catalyzed by our own people. In the zeal to stake claim, legitimacy and hold in the Hills, the dummy-caretakers yet again gave precedence (like our previous elected representatives) that Gorkhas and their demand for Gorkhaland are negotiable and has a price. The price this time was some Rs. 500 crore. Recovery from the 104 days strike had not yet begun that these dummy-caretakers further added to our humiliation by making a mockery of our struggle and losses by planning and organising such an ill-timed, undesired and unnecessary event. Perhaps, this Tourism Festival is simply to use the money that has poured in to show “normalcy” in the hills. But ground realities, as I have mentioned before, is very different from how these dummy-caretakers have tried to project or even envision. And this gives me hope.

The empty seats at festival venues, the anger against this “tamasha” (as put forth by an old man in his referrence to the ongoing festival) both on ground and on social media sites relieves me that not all is lost and that, we must continue to dream. The majority of people are neither thrilled nor happy at this infuriating display of insensitivity or stupidity. It is in these acts and responses that I can still sense the unshakable belief of our people in the dream for Gorkhaland – a dream for a better tomorrow. People – we, the janta are definitely watching the unfolding of events under the dummy-caretakers and no matter how brutally we are suppressed and subjugated into toeing in Bengal’s line, we will resiliently continue our struggle for a separate statehood in the aspiration to live a dignified life not just for ourselves but more importantly for our future generations.

ON KARGIL VIJAY DIWAS: We Remember – The Undiluted Heroism of Col. Lalit Rai (VrC) and His 1/11 Gorkha Troops

Be the first to comment on "Festival of Shame – Maa, Maati, and Morons"